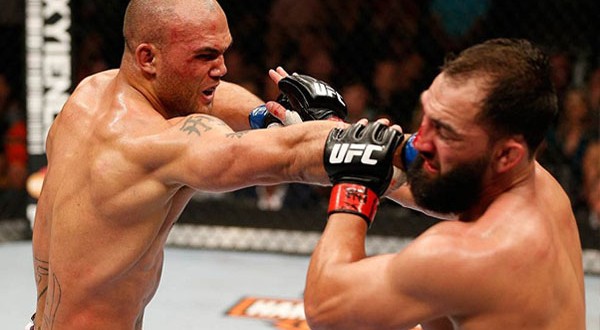 The PeachMachine is back to re-score Hendricks Vs Lawler 1 from UFC 171.

The main event of this show was supposed to be Jon Jones vs. Glover Teixeira, but that fight was moved to UFC 172, so we got a Welterweight Championship bout for the vacant UFC title. The title was vacated after GSP beat Hendricks, which I re-scored earlier in the month.

Hendricks vs Lawler Highligh from Roger Mcmahn on Vimeo.

Round 1: Some good exchanges but no real damage done to either man. Hendricks connected more so I gave him the round. Hendricks 10-9.

Round 2: Both men open up with a flurry. Ninety seconds of nonstop exchanges with Johny looking to be getting the better of it. Lawler can take a punch. Hendricks touched him every single time. Lawler is now pushing back. There’s just a ton of punches being thrown. Hendricks landed more, but Lawler was right there trading. Hendricks 10-8.

Round 3: Lawler is cut over the eye. Lawler starts connecting a lot and rocks Johny but he stays on his feet. Lawler is looking like the fresher man midway through the fight. Hendricks shoots for the takedown and doesn’t get it. Johny’s head movement is nonexistent. Lawler 10-8.

Round 4: Lawler is just peppering Johny and now Johny’s nose is busted. These are two tough fellas. Hendricks keeps pawing at his bloody eye. How have neither man dropped? These punches are just brutal. Hendricks comes storming back, but Lawler counters again. Johny’s face looks like Glass Joe from Mike Tyson’s punch out. Hendricks finished with a takedown. Lawler 10-9.

Round 5: Johny tries to take down Robbie. They end up on the cage with Johny pushing forward. Now back in the center and they’re trading. This fight is dead even with two minutes to go. Lawler slamming hands! Hendricks responds! Huge shots! Ninety seconds and Johny starts to pull ahead, and he gets another take down with a minute left. That last exchange sealed it for Johny as Lawler can’t get up, and shakes his head in frustration. Hendricks 10-9.

Media: Nearly every media outlet had it 48-47 for Hendricks.

Overall Analysis: This was not as close as GSP vs. Hendricks. Johny won the fight, and I agree with the decision, even though my scoring was slightly different. This was an awesome fight and I’m glad we got a winner because the rematch was definitely warranted, and given the outcome, I can’t wait for the rubber match.