Last week, Duan and I recorded our 5th Fabulous Four Podcast on the Thomas Hearns vs Roberto Duran knockout. It’s a quick one if you want to watch it.

While the fight in of itself wasn’t a war, that entire time frame from 1982-84 is crazy. Sugar Ray Leonard retires, comes out of retirement, and retires again. Duran is washed up and then makes an amazing comeback as a junior middleweight. Marvin Hagler finally gets his big PPV fight. And Thomas Hearns may be the scariest one of them all.

And in a few weeks, we’ll record our podcast on “The Fight” between Hagler and Hearns. 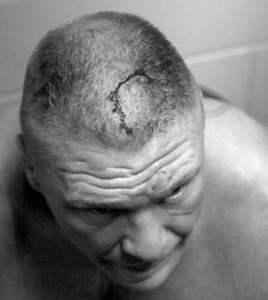 – This doesn’t look like a blade job to me.

– Kota Ibushi is out of action with an injury.

– Jerry Lawler and his girlfriend were in a car accident on Saturday night.

– Nikki Bella and John Cena dressed up as Dumb and Dumber for Halloween.

– Brock Lesnar is coming back for a house show in December.

– The Young Bucks sign a big deal with ROH.

– WWE put the first episode of their new Breaking Ground series up for free. You can watch it here. The rest of the episodes will be on the WWE Network.

– Their new WWE 2K16 video game got a really good review on IGN.

Two champs were hanging out at the gym.

Look who showed up to chat with Ronda Rousey today? @gggboxing !!

– Khabib Nurmagomedov pulls out of his latest fight with a rib injury.

– Kurt Angle has signed on to do a Bellator Fanfest, which may or may not open up other opportunities.

– These Creed posters are badass.

This Thanksgiving, one great legend will create the next. @TheSlyStallone @michaelb4jordan #CREED pic.twitter.com/dd2LH8RzL2 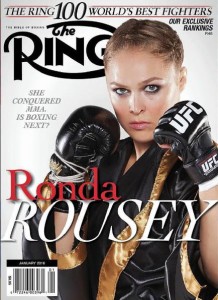 – This photo on the right has a lot of boxing fans in a tizzy.

– In what sounds like bad news, Antonio Margarito is coming out of retirement.
And now, the top five.

– Bob Arum wants the winner of Timothy Bradley vs Brandon Rios to face Canelo next.

This is an interesting one because for years, Bill Simmons mentioned that the one 30 for 30 documentary that he wanted to do was on Andre The Giant. Except, WWE wouldn’t cooperate and since they own all the footage, without their blessing, you don’t have much.

But now there’s word that Ric Flair is getting the 30 for 30 treatment. It’s of no coincidence I’m sure that ESPN and WWE now have a working relationship. My worry is that they may have a hand in the narrative, which would hurt the project.

I wonder what the story is. It can’t just be about his career and longevity because it has to also appeal to the casual fans. I would guess that it has to do with his son’s passing and his daughter following her brother’s dream. Actually, that’s a helluva story.

The Nevada Athletic Commission voted to suspend Palhares for two years for unsportsmanlike conduct after his fight with Jake Shields.

Much like the recent Nick Diaz suspension, this one also seems more like a punishment for the amalgamation of things he’s done recently, than just for this specific situation. There’s been no precedent. However, Palhares is dangerous and he’s shown a pattern for hurting his opponents.

To sum it up, profits were up (and they had to be considering the same quarter last year), the stock price went down, and the subscriber number was predictably down as well.

You can read more of Dave Meltzer’s analysis on the Wrestling Observer website.

2. Ken Hershman is out as president of HBO Sports.

In a story that didn’t get too much attention last week but is a huge deal, Ken Hershman resigned as president of HBO Sports, which is the department behind HBO Boxing.

Hershman was plucked from Showtime and even though HBO lost Floyd Mayweather to Showtime during his reign, HBO Boxing was in the midst of a strong year with Canelo Alvarez as a proven ratings draw for them. He also has a PPV fight with Miguel Cotto coming up.

His replacement hasn’t yet been named and he’ll continue until the end of the year.

1. Alberto Del Rio’s contract is quite the story.

Dave Meltzer dropped a bomb in Wednesday’s Wrestling Observer Newsletter with this piece of news:

Rodriguez signed a deal that multiple sources have said was for a $1,450,000 per year downside (and others who wouldn’t give a figure indicated something in that ballpark) with a reduced schedule, which is largely because WWE felt they needed an Hispanic star.

I don’t know what WWE’s payroll is like, but the $1 million number as a downside for the top stars was always the rumor. This would put Del Rio near the top more than likely, if that’s the case.

On Saturday night’s Wrestling Observer Radio, Meltzer said that WWE called him to tell him that his figure is wrong and it’s closer to 1/3rd of what he reported. On the latest MLW Radio, Konnan, whose AAA just lost Del Rio to WWE said that he believes the higher number because why would Del Rio leave for WWE, unless he was making more money. It sounds like whatever the 1/3rd number that WWE was claiming is what Konnan was saying that Del Rio made in Mexico either in AAA, or in all of his endeavours.

Have to tip your cap to Del Rio. He played this thing perfectly.