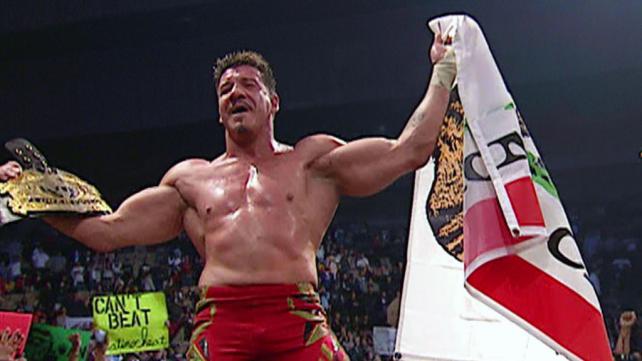 On the 10th anniversary of his death, we’re sharing our favorite Eddie Guerrero memories.

On November 13, 2005, I was in my hotel on a business trip when I first found out that Eddie Guerrero had passed away. There were tons of theories about what happened, but it turned out to be what people have to come to call, a wrestling death.

All deaths are unfortunate. Many wrestling deaths aren’t surprising. But this one was frustratingly sad. The year before, Guerrero had come into his own, overcoming his prior issues and achieving one of the two top prizes in wrestling. He was the rare wrestler who was beloved by the casual fan and hardcore fan alike. Both sets of fans couldn’t get enough of him.

When WWE pulled the trigger on him in February of 2004, it was like a victory for us all. Finally, one of the few wrestlers who could bridge that gap was going to be rewarded. Cadillac Don will have more on that moment.

Just a year and a half later, he was gone.

Here are some of our favorite Eddie Guerrero memories:

July 22 2002 was a special episode of Raw. Three Minute Warning debuted, Jeff Hardy and RVD had a title unification ladder match, HHH turned on Shawn Michaels after reuniting D-Generation X, and Brock Lesnar jumped to Smackdown. But the real reason why this was such a special show was that it was the night that Eddie Guerrero showed that he could be a legit main event player.

In the spirit of Chris Jericho in 1999, Eddie interrupted an in-ring soliloquy by The Rock and cut into “The People’s Champ” hanging with him line for line in the entertainment stakes. But unlike Jericho on his fateful night in Chicago, Eddie got the chance to back up his words in the ring. He and Rock made a match which would fill the main event slot on the show.

It was a truly excellent television bout. About as good as you could ever ask for. Guerrero made Rock look arguably better than he ever had before. He bumped like a lunatic and displayed an in-ring charisma from bell to bell which had the crowd eating out of the palm of his hand. Eddie put Rock over but looked very competitive in the process and this felt like a real coming out party for him.

When I think of Eddie Guerrero I think of one of the great all around performers in the history of the business and this was a night where all of his attributes were on display.

When Eddie passed, it not only hit me hard, it hit my wife hard too. She was there with me — the only time she went to a wrestling event with me — at No Way Out 2004. It was a wet day outside, the line snaking through the Cow Palace parking lot, and everybody was breaking out into loud “EDDIE!” chants. We sat in the nosebleeds, surrounded by people chanting Eddie’s name all night long. No matter the match, it was always “Eddie! Eddie! Eddie!”

Come the match, I didn’t know what to expect. Had no idea who would win, though everybody around me did. Brock Lesnar was the big menacing champ, and Guerrero had won a Royal Rumble match on Smackdown, eliminating favourite Kurt Angle. Seeing this matchup, I really hoped they would pull the trigger. It was time. Eddie was at the height of his popularity, and this crowd was fully behind him. He got slaughtered in the first ten minutes, quieting the chants a bit. Then he started working over Lesnar’s injured leg.

Re-watching this match gave me a sense of awe — Guerrero vs. Lesnar. This Eddie that I used to watch on Nitro with his mustache and mullet, putting on great matches, but not getting a chance to go anywhere. He couldn’t cut a promo, and he looked like your uncle.

Fast forward to Bill Goldberg spearing Lesnar, ALMOST giving Eddie the win. But of course, Eddie couldn’t win that way. He had to cheat, and the crowd loved it. I’m sure he also lied and stole something, but that’s a given. One big DDT onto the belt and three seconds after a huge frog splash, the Cow Palace exploded. People were crying, throwing things, hugging, chanting his name, giving chest bumps. The “EDDIE!” chants echoed throughout the building and the parking lot, until my wife and I got into the car. People were honking their horns, chanting, singing… we lived through Eddie, and we all shared that moment with him.

It was tough re-watching that match, but seeing his joy, seeing him leap into the crowd after winning, celebrate with his mother… it’s how I remember Eddie. The little guy who climbed and climbed, then finally slayed a dragon.

The photo below doesn’t elicit the same response that it did in 2004, not too long after Don’s favorite Eddie Guerrero moment. In fact, some may be bothered by it today. But the photo below represents my favorite WrestleMania moment of all time. 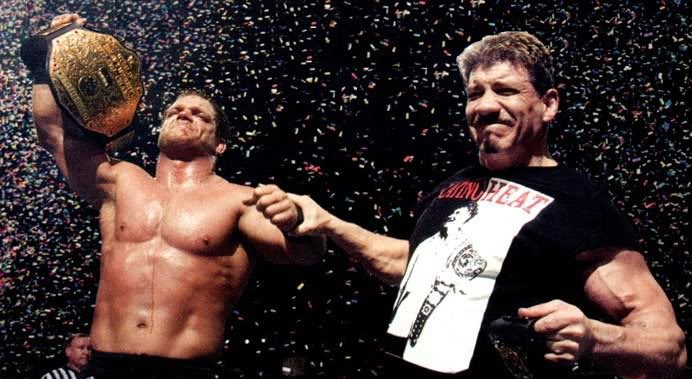 I was very much a fan of Chris Benoit’s work, but I wouldn’t say that I was as much of his personality. But it was different with Eddie Guerrero. Guerrero had everything, except height. Benoit was similar, but he wasn’t nearly as affable as Guerrero was. That was holding him back more than his height was.

It’s actually Benoit’s WrestleMania moment that’s my favorite Eddie Guerrero memory. At the end of WrestleMania 20, Chris Benoit stood in the middle of the ring to soak up the cheers and admiration of the crowd. He’d finally been awarded what he earned. And when Guerrero joined him in the middle of the ring, it was as if wrestling fans were awarded what they had earned as well.

Not unlike Daniel Bryan’s moment at the end of WrestleMania 30, two very deserving guys at the top of their craft celebrated and for a short time, wrestling was perfect.