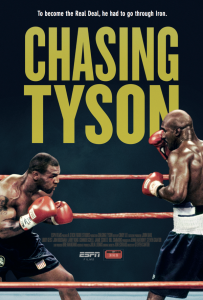 Boxing tells good stories. It’s an easy sport to understand because it’s mano y mano. You don’t have to worry about illegal defense, pass interference, or unwritten rules about bat flips and inside pitches. ESPN’s 30 for 30 documentary series has leaned on boxing for these reasons.

Muhammad and Larry was the third 30 for 30 film ever broadcast on ESPN, while One Night In Vegas, an interesting attempt to pair Tupac Shakur and Mike Tyson, aired later in the first season. Both films provided intrigue, but were rather unfulfilling. In season two, No Mas, featuring Sugar Ray Leonard trying to get an answer from Roberto Duran as to why he quit in their second fight, was an excellent film and one of the better ones in 30 for 30 history. Chasing Tyson doesn’t have the same depth as that one did, but it does provide a look back at an often overlooked boxing figure, Evander Holyfield.

When I say overlooked, I don’t mean that Holyfield the personality is overlooked. He’s a tremendously famous boxer. I mean Holyfield the boxer, is often overlooked as a fighter because of the time in which he came into his own in the heavyweight division. Holyfield’s entire career is set in Mike Tyson’s shadow. Yes, even though he beat Tyson twice.

Thus, Chasing Tyson is the perfect title to the documentary.

Tyson is the classic “what if” athlete. What if Tyson was more mature when he tasted success? What if Tyson never went to jail? What if Tyson knocked out Stone Cold Steve Austin instead of Shawn Michaels. Okay, that last one was just to make sure that you were paying attention.

Director Steven Cantor mentions that he doesn’t often do documentaries where he relies mostly on old footage, which is 90% of what Chasing Tyson is. Throughout, I did wonder if he could’ve taken a more interesting angle to telling the Holyfield story, but the fact of the matter is, the reason why Holyfield existed in Tyson’s shadow is why you had to rely on old footage. It’s not that Holyfield the person isn’t a fascinating character. It’s more that he’s professional rather than charismatic, by-the-book rather than exciting. On the flip side, Tyson is exactly the opposite. He talks fast, sometimes doesn’t make full sense, but when he’s done speaking, you’re smiling at either perceived genius or because he’s trying so darn hard to entertain you.

For some reason, the 1984 USA Olympic boxing team caught my attention for most of the summer of ’84. It wasn’t the Team USA basketball team led by Michael Jordon or Carl Lewis who caught my attention. It was the boxing team, specifically Pernell “Sweet Pea” Whitaker, Mark Breland (my favorite), and Evander Holyfield. Whitaker and Breland cruised to gold, but Holyfield had to settle for bronze thanks to an overzealous referee who disqualified him. It really set the tone of his career. He played the sympathetic character for most of it. If Tyson was the alpha dog of boxing, Holyfield was the wall flower. 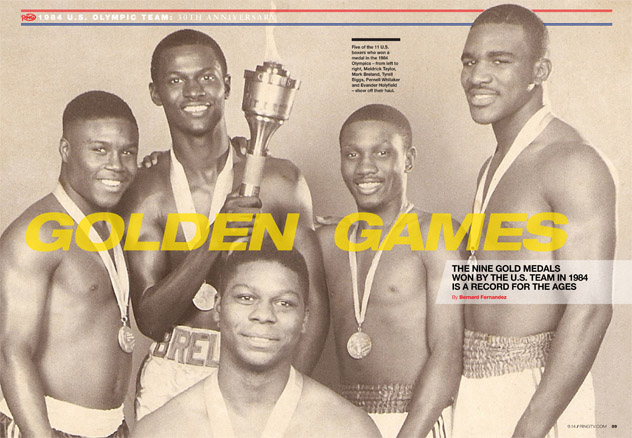 Before Tyson lost to Buster Douglas in Japan, he and Holyfield were dead set at locking horns. Holyfield was a blown-up cruiserweight, not unlike Michael Spinks (actually a light-heavyweight before the cruiserweight division existed) who Tyson crushed in 1988. Spinks had beaten the previously undefeated Larry Holmes twice in close decisions, but only fought twice over the next two years and against lesser opponents. But Spinks was really the blueprint for Holyfield, who would later lose to someone who followed in his footsteps by coming up in weight, Michael Moorer.

Holyfield then knocked out Douglas easily. Douglas had the eye of the tiger in beating Tyson, but only had his eyes on food before fighting Holyfield. He was quickly disposed. This is part of the narrative though. Tyson had to face Douglas at his best while Holyfield faced Douglas at his near worst. The booking of Holyfield also didn’t help him, even though part of boxing is making sure the right fighters win so they can set up the big money matches later. The biggest was with Tyson.

Holyfield’s first title defense was a decision victory against George Foreman. Even though Holyfield was outweighed by a lot, he knew that if he didn’t stop Big George that people still wouldn’t give him his respect. It also happened later when he let Larry Holmes (someone who Tyson knocked out a few years earlier) take him the distance. But those fights were there both because Foreman and Holmes as aging stars still had box office to their name, and beating them kept Holyfield strong. But without Tyson, he had to create his own path and that was with Riddick Bowe who was pretty much all wrong for Evander.

Tyson and Holyfield was set for late 1991, but Tyson’s camp postponed the bout and soon-thereafter, Mike was behind bars. After beating Holmes, Holyfield would go 3-3 losing to Bowe twice and Moorer. But you can go all the way back to a fight with Bert Cooper, which essentially took the place of the Tyson fight, where you could tell that the bloom may have been off the rose with Holyfield. Cooper tested Holyfield like he’d never been tested before, though Holyfield would win the fight. This fight isn’t brought up in the documentary.

Had Holyfield retired after losing to Bowe for the second time, like many experts thought he should’ve, he would’ve been known as a good heavyweight, but not a great one. He was diagnosed with a heart condition that zapped him of his energy after the Moorer loss, but was “cured” and came back to fight Ray Mercer and then Bowe again. Holyfield blames hepatitis for his loss in the third fight with Bowe, the first of only two stoppage losses of his career.

Tyson’s first fight out of jail was just four months after Holyfield’s third fight with Bowe. Interestingly, they didn’t immediately try Holyfield, even though it would’ve been a tremendous PPV right out of the gate. But they knew that the hook to Tyson being out of jail was simply that he’d be fighting for the first time in four years. They didn’t need Holyfield yet and maybe they thought they always had him in their back pocket since he was struggling to beat Bobby Czyz and Tyson was back on top of the world.

The booking of fresh-out-jail Tyson was extremely safe. He beat Peter McNeely, Buster Mathis, Jr., Frank Bruno, and Bruce Seldon with none of the fights going past three rounds. While that was Tyson’s forte, boxing 8 rounds in a year against stiffs couldn’t have prepared him for what was to come with Holyfield. 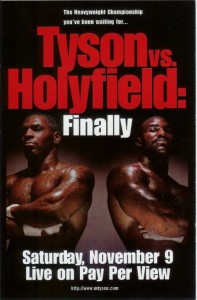 I clearly remember watching the first Tyson-Holyfield fight with as much nervous energy as any fight I’ve ever watched. My neighbor Michele, whose house we were watching the fight at, made an observation that my dad and I would both lean forward at the start of the round then sit back exhausted when each round was over. Even though Holyfield was a 22-1 underdog, you could tell early on that this wasn’t going to be easy and the facade of the unbeatable Mike Tyson could be broken. And then it was.

I couldn’t understand why Tyson would care so much about a little cut on his eye, but what we were seeing was the bully being bullied. As a Tyson fan, I tried to scream about Holyfield’s big old head being right in Mike’s face, but the reality was that he simply out-boxed Tyson. And once Tyson was shook, he was a goner.

During their rematch, it was the chance for Tyson to redeem himself as the baddest man in boxing, but after the first round was over, I was pretty sure we were seeing a repeat of the first fight. Watching the footage of Tyson biting Holyfield’s ear was just as insane as it was over 18 years ago even though I’ve seen it a hundred times already. Tyson was a wounded animal and his instinct was to bite. It’s unbelievable, yet it happened.

Holyfield’s post Tyson career was going quite smoothly until he ran into Lennox Lewis in 1999. He avenged his loss to Moorer, but like Bowe, Lewis was all wrong for Holyfield. He had too much length and knowledge of how to keep Holyfield from getting inside. Though their first fight was a heavily contested draw, he beat Holyfield in their second fight to win the belts. Holyfield would beat John Ruiz to win another title, his 4th run, but by then, it was Lewis’ world and boxing people didn’t take that win very seriously. Amazingly, Holyfield’s last fight was just 4 years ago. He beat Brian Nielsen, who had a 9 year layoff and had lost to Tyson in 2001.

There were two things that the director Steven Cantor stayed away from in order for his story to make sense. The first is that in order for the Holyfield as the good guy and Tyson as the bad guy narrative to work, he couldn’t bring up things that came up throughout Holyfield’s career which was steroid and HGH usage. It was hinted at by Bryant Gumball in an old HBO Real Sports interview, which was shown in the documentary, but never tested. In 2007, Holyfield was tied to a steroid and HGH bust and used the name Evan Fields in order to buy the drugs. Many thought it was the source of his heart condition that led him to stop fighting for a short time after the Moorer loss. He has continually played the nice guy role when it came to steroid usage, though his physique was always out of the world, all the way until the end of his career. Even today, he looks like he can get back in the ring.

The other thing the director mostly stayed away from, but was part of the reason why Holyfield wasn’t taken seriously in the second half of his career, was Holyfield’s reliance on his religion as his inspiration and the contradiction it provided once it was learned that he had 11 kids with 6 women. His faithfulness to Christianity was shown in the documentary, but mostly glossed over. They showed footage of preacher Benny Hinn “healing” him after the heart ailment even though it was later determined that his heart ailment was misdiagnosed. Even before people knew about the misdiagnosis, it was thought that Holyfield’s insistence of being healed was over the top.

In fact, in the court of public opinion, Tyson, who was out of jail after being convicted of rape, was more respected than “Real Deal” Holyfield because of Holyfield’s reliance on insisting that religion was the reason for his success. Tyson just seemed more real to people and many rolled their eyes at Holyfield. And the fact that he was married 3 times and is currently separated from his third wife doesn’t show him in a great light considering what he preaches. But Cantor couldn’t add that information as it would’ve changed the story. It wasn’t what this movie was about. It was about Holyfield chasing Tyson, overcoming him, and winning over a Tyson-heavy public.

Cantor used current interviews with Tyson, Holyfield, and Jim Gray to help bring a present day reflection of Holyfield’s career. And yes, Holyfield is bland and Tyson is dynamic. It kind of made you realize why Holyfield had to chase Tyson and not the other way around.