I have an idea for WrestleMania 32. How about Team PCB vs Team Bestie? 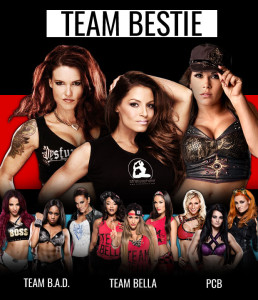 Last year, Dana White tried to make a dream fight in women’s MMA. It more than likely wouldn’t have been competitive, but it would’ve been quite the spectacle.

Unfortunately, White couldn’t get the deal done with Gina Carano and thus, we never got to see Ronda Rousey face her. Rousey wanted to give her the opportunity for the title fight even though Carano had been retired solely because of her respect for Carano as a pioneer.

WWE is in the midst of attempting to push women’s wrestling harder than just about any time in recent memory. However, they’re not doing even close to as good of a job as they’ve done with their NXT brand, which featured Bayley and Sasha Banks in the main event at their last WWE Network special. From an emotional standpoint, that match was about as good as you’re going to get.

You’d have to go back to late 2004 when they emphasized the women’s division this much. I was reminded of this when I watched the excellent episode of WWE Rivalries: Trish Stratus Vs Lita. Trish and Lita were in the main event spot on Raw when Lita won the Women’s Championship to close the show.

What could be the Ronda Rousey vs Gina Carano match for WWE? How about Trish Stratus vs Charlotte?

As of this writing, Charlotte is the current Diva’s champion and she’s set to defend her title against Nikki Bella at the Hell In A Cell PPV/Network special. If it were me, I’d keep the title on Charlotte and really make that title mean something. While Nikki’s run was fun at times, it wasn’t promoted as important until the end and outside of a few matches, it wasn’t memorable. And many times, the Diva’s title was treated as fodder.

In December, at the TLC PPV/Network special, Team PCB cuts a promo about how there’s no one left. Enter Trish Stratus. Trish comes out and says that she and Lita were once in the main event on Raw and that she was the greatest women’s champion since the Fabulous Moolah. And if Team PCB is out of women to face, Trish and her two friends will be waiting at the Royal Rumble.

At the Royal Rumble, Team PCB would face Team Bestie in a six-women tag team match. During the match, Trish Stratus would get the pin on Charlotte to set up a Diva’s title match at WrestleMania 32. Lita and Mickie James would be in her corner and Becky Lynch and Paige would be in Charlotte’s.

In the build-up to the match, Trish would stress how Charlotte has it all, yet is still missing that one thing that makes champions great, which is the ability to dig deep when daddy isn’t around and pull it out when every last chip is down. And Trish is going to bring it out of her at WrestleMania 32 by winning the Diva’s championship once again.

At WrestleMania 32, Charlotte kicks out of the Stratusfaction and beats Trish with the Figure 8 after a 10-15 minutes. At the end of the match, Trish passes the proverbial torch to Charlotte and all six women raise each other’s hands when the match is over. The emotion would be off the charts if done correctly.

I think it would be an incredible WrestleMania moment.