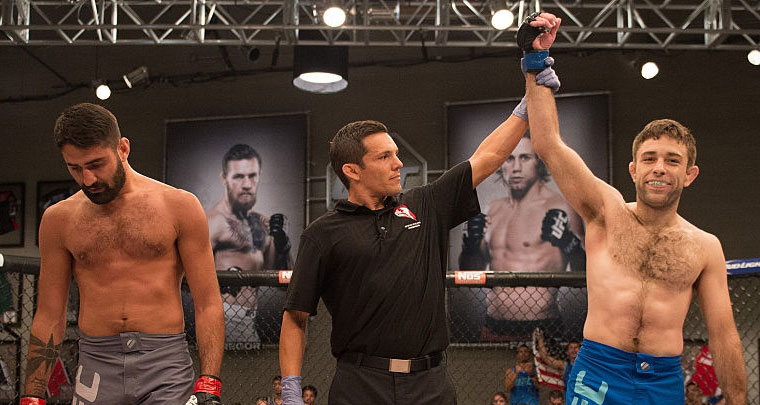 PeachMachine brings us a supplementary version of True Ten Scoring.

[GG’s note]: Welcome PeachMachine! He does a column on the Wrestling Observer called True Ten in which he scores main card fights that go to decisions, but using a less-traditional scoring method, which he’ll define below.

This is a supplemental piece to his Observer columns. He takes a look at The Ultimate Fighter fights for this current season.

Welcome to the first edition of TUF True Ten Scoring. This article is a supplement to my weekly big show scoring breakdowns that can be read at WrestlingObserver.com.

In this piece, I will take a weekly look at the scoring of the house tournament fights. The purpose of these articles is to compare the current judging system with an alternative.

I offer three results. The first is the official result coming from the judges. The actual judge’s decision comes from scoring the fight using what I refer to as the “Classic Ten” point must system. Judges are encouraged to “find a reason” to score a round for a fighter, as to avoid 10-10 rounds. I do not like this system, but it is what is being used in most MMA fights today.

The second result is my scoring of the fight using that system. I put myself in the judges’ shoes and “find a reason.”

The third system is the experimental system I call “True Ten” where the winner still receives ten points for winning the round, but more of the points are used based on the damage differential / scoring criteria. It is scored as follows…

10-10: A round where you could find a reason for either fighter. Don’t! It’s a draw round. It’s ok to have draws.
10-9: A squeaker round but one fighter did a little more damage or maintained slightly more control.

10-8: A round where one fighter surely won, but did not dominate or do a ton of damage. This type of round would be a 10-9 using the “Classic Ten.”

10-7: A round where one fighter clearly won the round, and did a lot of damage, but did not get close to a stoppage.

10-6: This would be the “Classic Ten” 10-8 round, where a fighter whipped another fighter for the entire round, and the fight possibly should have been stopped.

10-5: Why is this fight not being stopped! Come on Mazzaggati! Get in there!

I do not go any further than the five-point differential. It seems like splitting hairs to go beyond. Obviously I could make this a 5-point scale, but baby steps people…

So that’s the experiment in a nutshell.

On with the show…

Usually these are two round affairs that only go to a third if the fighters split the first two. I can only assume these fights are judged by commission judges in the same way as regular fights. These decisions are kept pretty closely under wraps since they are taped well in advance of airing.

This was the show with 16 fights

Here is a link if you want to read about and watch all of those.

I watched it, but have no recollection of anything other than Ryan Hall’s heel hook. That, and each of the coaches were drinking NOS, the energy drink that super charges douche bags.

Analysis: Sorry Frantz. You drew the number one seed. Enjoy the free food and booze for the next 12 weeks. My early prediction is that Hall wins it all. On a side note, I recently was heel hooked in training by a black belt and it unintentionally popped my heel. It was an accident. That was three months ago and it still is not healed. Get it? This is a dangerous move. Tap early friends.

Official Result: Dana only read the final round scores, and all three had it 10-9 for Gruetzemacher. Upon looking it up on mmadecisions.com, indeed all three scored it 29-28.

Analysis: I wish Sharma won because typing out Gruetzemacher nine, and now a tenth time, sucked. This should have ended after the second round. Everyone saw that the third round was going to be a one sided whipping, and it was. If the judges had used my patent pending True Ten system, the third round would not have been necessary. Instead, Sharma had to take five more minutes of a beating.

Analysis: The win by Marcin Wrzosek puts him in the quarterfinals against Ryan Hall, which in my opinion, is bad for Mr. Wrzosek. I could see giving the first round a 10-10 because Gallicchio had some back control, but really, he did not do any damage or come close to a submission. It’s not all about damage, as octagon control, aggression, and defense do come into play, but the casual fan does not really look at anything other than connected strikes. I consider most judges casual fans since they usually come from the boxing world, where strikes are the only thing to score. Thus, in my opinion boxing is stupid, and an antiquated sport [Ed. note: C’mon Peach!]. Why in the world we use their judging system and judges is beyond me, but that is an argument for a different time.

That is all for this week. For more, check out my idiotic twitter where my dog Hendo gives his opinion on food @hendosfoodblog.