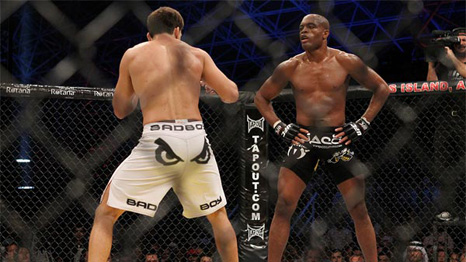 The PeachMachine is back to score one of Anderson Silva’s goofiest performances, Silva vs Maia.

I’ve always wanted to go back and examine this match and judge it as I do not remember much about it, other than I wanted Maia to win because I felt like he had a chance to submit Silva if he could take it to the ground. Most predicted an easy night and another KO for the Spider, as his original opponent, Vitor Belfort, withdrew due to a shoulder injury and Maia was a late replacement. In pro wrestling parlance, when you have to swap out the championship contender in the main event, you put him over.

However, I’m not sure anyone could have predicted what actually took place.

Round 1) Silva wins this round, and it looks like Maia is out of his league, but not a lot of damage. 10-9 Silva

Round 2) Silva is clowning again, and Maia is trying to box for some reason. Silva wins this round but again, not much damage. Maia attempted some terrible takedowns. He was just leg diving. The fans started booing this round, and at this point, nobody had a clue what Silva was thinking. Silva did more talking than fighting. 10-9 Silva

Round 3) Maia is busted open, and Rogan and Goldberg are picking this round to be the finish. You have to hand it to Maia because he is not coming out of his game plan and biting on this showboat nonsense. This round shows the first inkling of it being a fight with a nice exchange. Silva actually slips in behind Miragliotta just to be cute. Silva actually did some damage. 10-8 Silva

Round 4) Silva did absolutely nothing this round and the crowd turned on him and started cheering Maia. Maia finally showed some frustration with Silva not engaging and started putting his hands down. Silva did nothing and Maia came forward and was trying to fight so I’m scoring this round even. 10-10

Round 5) Miragliotta urging them on, and Maia now closes the distance a bit and touched Silva for about the first time, but just couldn’t take him down. Maia just could not drag Silva to the ground, but he tried, and was engaging this round. Meanwhile, more of the same nothing from Silva. Miragliotta finally steps in and warns Silva that he’s going to take a point from Silva if he doesn’t engage, but that warning came way too late. 10-9 Maia

Overall Analysis: This was a joke of a fight and Dana let Anderson have it afterwards. There’s a time and place for showboating, and it’s in round 1, but that’s it. After that, you’re just being a jerk. I would have been screaming at Maia to rush him and try and put him on the cage to hopefully pull guard. I’d like to see a rematch of this fight, maybe at a catch weight. Given the trajectory of each man’s career since 2010, it could be interesting.