Later this week, we’ll have our fifth Fabulous Four podcast discussing Thomas Hearns’ quick victory over Roberto Duran. While there wasn’t much to discuss when it came to the actual fight, but there was so much going on during that time frame. Duan and I talk about it all.

– I’m not much for giving away spoilers but Roderick Strong beat Jay Lethal for the TV title at their last set of tapings.

– Randy Orton is going to be out with a dislocated shoulder. 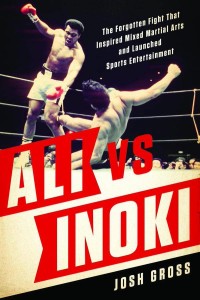 – Conor McGregor was a world class heel and a truth teller on the last episode of the Ultimate Fighter.

– The UFC did some house cleaning this week.

– Kovalev and Pascal are going to get together again.

Before he’s even fought Miguel Cotto, Canelo Alvarez is already calling the shots on a future bout with Triple G. He said that he learned his lesson in the Floyd Mayweather fight that he’s not going to manipulate his best fighting weight. Well, I’m not sure the weight is what made the difference in that fight.

It also doesn’t make sense for Triple G to go down in weight so maybe we’ll just have to wait on that fight. But even if Cotto loses against Canelo, he seems to be at the stage in his career where he’ll chase the biggest fights and maybe be next for him anyway. I’d be very scared for him in a fight with Triple G, but it would be the next big fight after Canelo.

But it does seem at this point that the disappointing PPV number that he did with David Lemieux that Triple G is probably not the shot caller right now.

4. Andre Ward inks with HBO and the road to Kovalev is on.

We’ve discussed the battle plans here before. But it’s been reported that Andre Ward and HBO came to terms and the road to Sergey Kovalev is on. I think it’s the right fight for Ward and it made me realize that while the Super Six helped put him on the map, it may have also been his curse since he cleaned out the division so easily. Rather than going through those fights so quickly, he may have been able to make them last a bit longer rather than go through the malaise that has been the last few years of his career.

Let’s hope this plan goes to fruition as Ward vs Kovalev is a big fight and one I can’t wait to see.

3. Terence Crawford wins and may get Manny Pacquiao next.

Terence Crawford put work on Dierry Jean before finally stopping him late. Crawford has an innate ability to quickly figure things out and make adjustments on the fly, and he did that here, switching to southpaw almost immediately and taking Jean completely out of the fight.

Before the fight even happened, word came out that Bob Arum was looking at Crawford’s fight as an audition of sorts for Manny Pacquiao’s supposed last fight in April of 2016. How did Crawford’s audition go? Maybe too well?

Brock Lesnar and the Undertaker had a helluva match on Sunday night inside the Hell In A Cell cage. It might not have topped their first Hell In A Cell, but from a psychology standpoint, was just about as perfect as it could’ve been.

After the match, the Wyatt family came out and attacked the Undertaker, which looks to be setting up a Survivor Series elimination match of some sort. It could be the Wyatt family against Taker, Kane, Dean Ambrose, and Roman Reigns, but there wasn’t really even a tease of that.

Earlier on the Hell In A Cell PPV, Alberto Del Rio was John Cena’s mystery opponent and he disposed of Cena fairly quickly. So it looks like Del Rio is done for the time being in AAA, even though he’s still the champion, Lucha Underground (which was reported last week), and the MMA group Combate Americas that he was an announcer in.

I am grateful for the opportunity to resume my career and I am excited to show how much I’ve grown as a person outside of the octagon. It took me losing almost everything I had worked for to realize how much I had. I am blessed and humbled by the continued support of the MMA community and I can’t thank my fans enough for their unwavering support through my ups and downs. This marks the beginning of a new chapter in my life and my career and let me assure you, the best is yet to come.

The UFC reinstated Jones and the smart money seems to have him chasing Daniel Cormier since Cormier has the belt that Jones didn’t lose. It would add to Ronda Rousey vs Holly Holm and Conor McGregor vs Jose Aldo as another huge fight in the upcoming months. But the storyline is a little backward. The heel is chasing the babyface and the fans sort of expect him to get his belt back. It will be interesting to see how the UFC will spin this in the coming months.