Before we get to the top five, two things.

– First off, congrats to our own Big D who was married over the weekend. We at FGB wish D and his wife luck and happiness. And hopefully in the near future, we get to see some baby Big D’s running around.

– Harry Smith gets to use the British Bulldog moniker.

– Who I’d bring back for WrestleMania 32 to really help the Diva’s division.

– I miss the Great Khali.

– SenorLarioto writes about a lull in New Japan.

– Sounds like Tyler Breeze is being brought up to the main roster for WWE.

– Brian Phillips of Grantland writes about Andre The Giant.

– Jake The Snake Roberts was a really good guest last week on the Adam Carolla show.

– Alberto El Patron is in the news for cancelling two Germany dates because of traveling issues.

– WWE allowed Sami Zayn to show up at the Evolve show over the weekend.

– PeachMachine looks at a classic fight from UFC 139.

– Ronda also admits to dating Travis Browne, who is technically still married. I would’ve waited on admitting that one.

Hey everybody pulled out the W. Wasn't pretty but I did it. MMA has taken me to such great heights but I'm calling it a career #Thankyou

– Stipe Miocic vs Ben Rothwell is off this weekend’s UFC Ireland card. 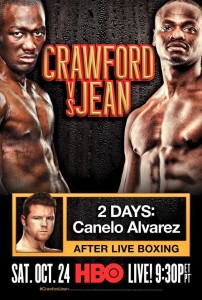 – Terence Crawford is back in business this weekend.

– Kell Brook had to postpone his next fight because of an injury.

– Lou DiBella posted this about boxer Prichard Colon who is in critical condition after last night’s fight.

Everyone in boxing, everyone at MSG, please join me in praying for Prichard Colon, a wonderful young man, and his family. Time to unite.

5. Rusev and Lana are engaged.

Yes, in real life. Does this matter in the long run? Well, not really, except that in storyline, they aren’t together, yet were probably going to end up back together soon.

WWE’s way of handling this was to have Summer Rae “catch” Rusev as if TMZ didn’t make it public already. It was a pretty sloppy handling, making you think that it caught WWE off guard.

Nothing much in the form of social media for either Rusev or Lana, except this.

Power is in having your own voice. Not being pushed around. Fighting for what you believe in & not being a copy cat to receive affirmation

Last week, we mentioned that the original Mistico jumped to CMLL. According to the Wrestling Observer, Mistic 2.0 is the new name.

While I’m not too sure about the creativity of the name, it does give them the opportunity to have a match for the name with the original Mistico and the current Mistico.

3. GSP hints at a comeback.

Time and time again, people were waiting for GSP to talk about making a comeback. Dana White seemed to mention it weekly. Then, it died out. Well, GSP is bringing it back up again.

He says that he’s been training and getting the feeling to come back. With Johny Hendricks and Robbie Lawler as the killers of the division, I’m not sure this is the perfect time for GSP, but I know the UFC would love to see it.

What’s odd is that after UFC 189, there were whispers in Vegas about the UFC wanting to set up a match between Lawler and GSP, and then that talk was erased with talk that GSP wasn’t feeling 100% healthy.

2. Thomas Hauser follows up on whether Floyd Mayweather needed the TUE.

Hauser followed up his article from a few weeks ago with a counter to USADA’s article, continuing to wonder if Floyd Mayweather was dehydrated.

You should read the entire thing and it is a long read, but here are some of his questions about whether or not Mayweather was dehydrated:

And Mayweather weighed in for the Mayweather-Pacquiao fight at 146 pounds (one pound under the contract weight), which is a further indication that he didn’t need to dangerously dehydrate to make weight.

Also, Mayweather was given a pre-fight physical examination by the Nevada State Athletic Commission on the day of the weigh-in. Did he disclose to commission doctors at that time that he was so badly dehydrated that he needed an IV infusion? No, he did not. Nor, according to NSAC records, did the examining physician find evidence of dehydration.

If a fighter is dehydrated, his blood pressure is likely to be low and his pulse rate high. That wasn’t the case with Mayweather as evidenced by the Nevada State Athletic Commission medical data sheet.

The biggest event of the weekend was Gennady Golovkin’s PPV debut against David Lemieux. Golovkin out-boxed, out-slugged, and beat up a tough Lemieux.

After the fight, Golovkin essentially called out everyone, and if the PPV buyrate does better than expected, there might not be a reason to duck him any longer.