We take you back to Sugar Ray Leonard’s comeback in 1984 against Kevin Howard.

In our latest Fabulous Four podcast on the Hearns vs Duran, we discussed Sugar Ray Leonard’s retirement, comeback, and then retirement again which happened all in a span of two years.

He originally retired after his fight with Bruce Finch because of issues with his left eye. He had surgery for a detached retina but held the infamous press conference/party in which he announced his retirement, all while dangling a future fight with Marvin Hagler in front of his face. 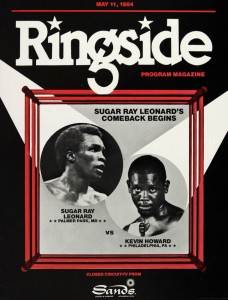 Two years later, he decided to come back, mostly because he was bored according to him. But his comeback fight against Kevin Howard was stalled because of possible issues with his right eye. After it was fixed, he was back in the ring against Howard on May 11, 1984.

Leonard called for thumbless gloves to protect his eye. Howard seemed to think it was uncomfortable, but wasn’t going to give up his biggest payday just so he could punch with thumbs on his gloves.

The fight was awkward and frustrating to watch if you were a Sugar Ray Leonard fan who hoped to see him not miss a beat. If you were a fan of the underdog, it was pretty fun, though not a great exhibition of fine boxing.

Leonard was tentative early and it caught up to him in the fourth round. He started to feel better in the fourth and threw out a lazy jab which turned into a counter-right from Howard that put Leonard on his butt for the first time in his career.

Leonard didn’t seem hurt, but did seem embarrassed by the knockdown. He casually figured out Howard, though not in an impressive manner until the ninth round. Howard, who was in Leonard’s face all night after rounds, was hit, dropped his hands, and started to get woozy. The referee stopped the fight prematurely, though, Howard was hurt. How hurt? It’s hard to know, but with it only being a ten rounder, Howard had a chance to finish the fight.

But he wouldn’t have won it. All the judges had Leonard ahead even with being knocked down and Howard would’ve had to stop him to win it.

After the fight, Leonard decided to retire after feeling like he wasn’t himself. This had to surprise HBO as all night, they’d been promoting future fights with Aaron Pryor and Marvin Hagler.

It’s a bit surprising that Leonard would call it quits after one fight that was more like an exhibition, figuring that he could resolve his issues in another tune-up or two, but maybe there was a worry that he didn’t think he could beat Hagler or Pryor at this point.

After the fight, this was his quote.

Carlos Ortiz was the Godfather of Puerto Rican Boxing