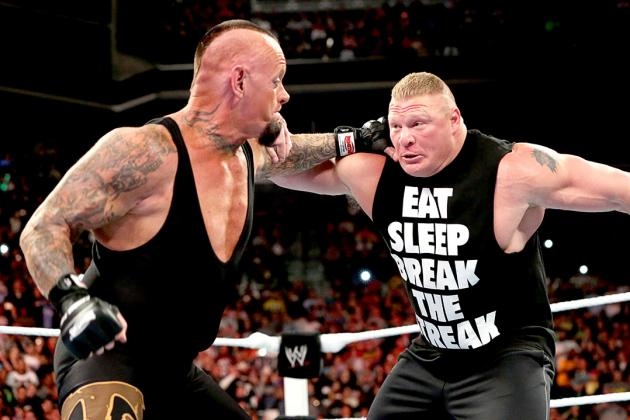 Cadillac Don wraps up our look back by ranking Lesnar Vs The Undertaker PPV bouts.

In two days I went through the five Undertaker/Brock Lesnar matches, watching the progression of “Biker Taker” and “The Next Big Thing” to “Old Man Taker” and “The Beast Incarnate”.

Ranking those five matches were quite easy due to a few bad finishes and one completely awesome match that may never be equalled.

Here they are, from worst to best:

5. No Mercy 2003 — Biker Chain Match for the WWE Championship

The best thing about this match was Brock Lesnar’s hair. Really. You need to check it out. Maybe with his falling out with Paul Heyman meant no more seeing that certain barber, in case they accidentally run into each other. Undertaker actually looked better than he’s had in a very long time.

This was their third match, so the two were familiar with each other. Taker was in the middle of his Biker Taker gimmick with the motorcycle and “Dead Man Walking” theme music. And Lesnar…well, he was the WWE Champ at the time, and still has the same theme music. And he was big and fast, but looked and wrestled much different than the Brock of today. He dodged Taker, who was portrayed as the bigger, dangerous man.

But this match was a mess. Lots of fun striking, a piledriver on the steps, and a run-in by Nunzio, Palumbo, and Johnny the Bull. Yeah, the FBI ran in for no apparent reason to attack Taker. Then Mr. McMahon came out to ensure Lesnar won.

What I took away from this match was that Lesnar had just become another big man. He was the champ, but the shine had worn off. Tazz still said “Here comes the pain!” but it seemed worn out. And he needed four men to help him beat Taker.

This was the first Taker/Lesnar match since the 2003 debacle at No Mercy, and both men had changed dramatically. Biker Taker was long gone, the “Sara” tattoo on his neck covered by a mess of tats. Brock Lesnar was no longer The Next Big Thing. He was now The Conqueror. The Beast Incarnate. BAROCK LESNAR!

This match was historic for the Undertaker 21-year Wrestlemania winning streak ending. Of course it was possible, but not too many people would have picked Brock Lesnar to be the man to end it. He wasn’t a full-time wrestler. He didn’t need the win. He was a monster who wouldn’t be hurt by a loss.

But this match…this match was a far cry from what these two had produced before. Gone were the high impact moves and excitement, replaced by the announcers — mostly JBL and Jerry Lawler — almost whispering during the sloooooow parts of this match. And I mean slow. And quiet. Making the match very very boring. The match was hurt by Taker suffering a concussion, which really took a bite out of his offense.

The ending seemingly came out of nowhere, though in retrospect it’s where the match should have ended. Lesnar reversing one of Taker’s finishers into the F5 for the win in front of a shocked crowd. 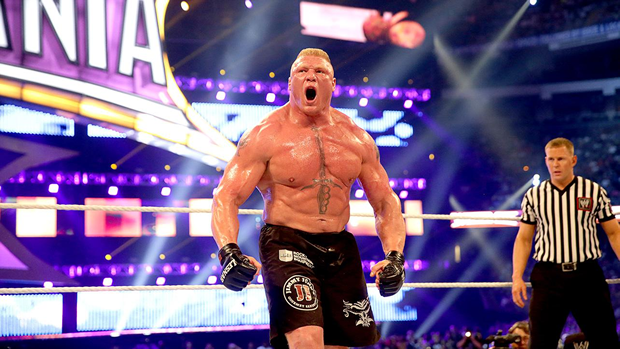 Rating: 7/10 — this match was not good. It’s very memorable, but it was a chore to watch again.

The latest match between the two really showed you what might have been at WrestleMania. Both men gave it their all (that they could) and seemed to be having a lot of fun in the match. Plenty of finisher kickouts and one sit-up laughing spot that I had to re-watch about 5 times, ultimately showing my wife.

Lesnar was in “Suplex City” mode, with the crowd (and Heyman) counting along. This was a more methodical Lesnar than the one Taker faced 12 years ago. Back then he was dodging Taker to start the match, this time he went after him before Taker could even take his coat off.

Though this match started off a bit slowly, it really picked up after Taker hit a chokeslam. Both men were down, then did the laughing spot. This was followed by some awesome striking that matched the intensity of their much earlier matches.

And then the finish happened. Lesnar put Taker in the kimura lock, and Taker tapped without the ref seeing. But the timekeeper did and did something no other timekeeper in recent history has done — they usurped the role of the referee and rang the bell. The referee called him on it, the match was restarted, and Taker surprised Lesnar with a boot to the groin followed by the Hell’s Gate submission. Lesnar shot him the bird, but then passed out.

Rating: 7.5/10 — A very bad finish that should not have happened between these two men marred this great match. But then again, judging from their history…maybe it’s not that surprising.

Paul Heyman (with his baseball cap): “If anything happens to you in this match and you can’t provide to your family, I want you to know, the giving man that I am, I will definitely take care of your loving wife Sara. But I refuse to take care of your unborn child.”

The era of making everything personal!

Undertaker defeated Kurt Angle and Chris Benoit in a Triple Threat match to become the #1 contender to the youngest WWE Champion at 25, “The Next Big Thing” and “Here comes the pain” Brock Lesnar.

This was their first match, and it was a doozy. Not too often did you see this kind of brawling in a WWE title match in the early 2000s, and it was a sight to see. I’m sure if I was in the crowd I’d be on my feet the entire time, watching these monsters hit each other as hard as they could.

Lesnar had just completed going through a list of legends, including the immortal shot of him wiping Hulk Hogan’s blood across his chest. Like, wow. There was a part of this match where Taker bled and Lesnar went after him like a shark, grinding his fist in his open wound. He was young and hungry. He had proved himself, but wanted more. He even took an unprotected chair-bending head-shot, which makes me wince just thinking about it.

Of course, since this match was a setup to a rematch the following month, it ended in a DQ. Which…well, it started with a ref bump, followed by a Matt Hardy run-in. Which I did not see coming. The whole thing ended with Taker throwing Lesnar through the Unforgiven sign, seconds before the PPV went off the air. 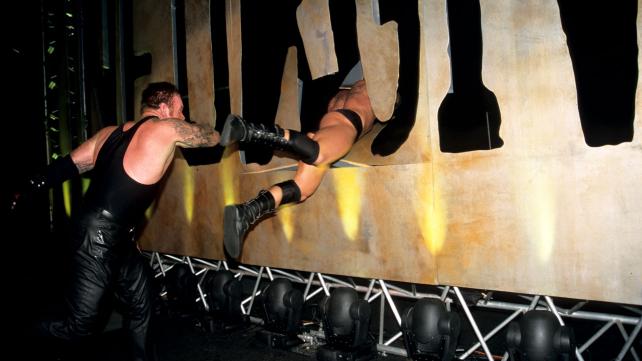 Heyman: “Where’s your head, Taker? Are we in it? Is it haunted by ghosts from your past? Do you fear your unborn child may never see a healthy daddy? After his man unleashes his fury on you tonight? Yes, you were the phenom during a decade of destruction, and this is your signature match. One which you have ruled with domination and brutality. But you’ve never walked through hell with a man as sadistic as Brock, a ruthless animal that has destroyed the greatest icons the world has ever seen. This is the new phenom that is going to annihilate, lay waste to your legend, destroy all that you hold so dear. Undertaker, your destiny has arrived and condemns you to hell. Dead man, rest in peace.”

Here are a few of my notes:
– Kane (right before his Katie Vick match with Triple H) and Undertaker sitting side by side in the locker room. Kane: “How was YOUR week?”
– Earlier, Lesnar broke Taker’s hand with a propane tank. Stephanie let him wear the cast in the match
– Undertaker uses cast on Lesnar. Heyman: “Not this way!”
– Undertaker bloodies Heyman pulling him against the cage with his tie
– You knew that cast was going to have to come off
– Hard striking. Trying to kill each other.
– Lesnar holding top of cell to kick Undertaker
– First Taker dive
– Destruction. Blood. Mayhem. Blood.
– Taker hitting a 1.2 on the Muta Blood Scale, blood gushing onto the mat!
– Blood splattered on the camera!
– Lesnar screaming
– THIS IS AWESOME
– “Will these two men ever be the same?”
– “The Undertaker did indeed make Brock Lesnar famous. But not in the way that the Undertaker intended.”
– Lesnar climbs to top of the cage to celebrate with the belt