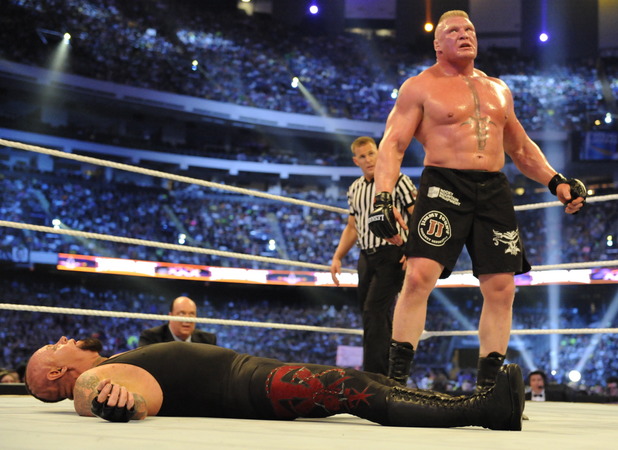 This is the fourth of five columns remembering the Brock Lesnar and Undertaker PPV matches.

(If you missed our previous columns on the Brock Lesnar vs The Undertaker PPV matches, check them out – Unforgiven 2002, No Mercy 2002, and No Mercy 2003.)

I was in the building.

Brock Lesnar: Attempting to break the streak
The Undertaker: 21-0 at WrestleMania

This one is simple. The Undertaker was 21-0 at WrestleMania. And Brock Lesnar was trying to break the streak.

Brock Lesnar Vs The Undertaker At WrestleMania 30

I don’t know if it’s the most memorable moment in the HISTORY of wrestling, but it was certainly the most memorable that I’ve ever seen take place in between that 20 x 20 ring and easily the most shocking moment I’ve ever seen live. Lesnar hit a third F-5 and defeated The Undertaker at WrestleMania XXX, breaking the mythical and money drawing streak at 21-1. Words can’t describe exactly what it was like and unless you watched it live or were there, watching it the next day or a week later or years later isn’t going to really hit you with that same shock.

For many years, the streak was the most valued draw at WrestleMania, to some even more so than the World Heavyweight Title and literally NOBODY whom I had spoken to during that time thought Brock Lesnar, part-time guy who had a 4-2 record in WWE at the time, had a chance to break it. There had been conflicting stories throughout the weekend and even months after about when the decision was actually made, but we do know for certain that it was made to elevate Brock Lesnar to heights he had never been before. The plan was of course, to have Lesnar go on to squash the WWE Champion (at the time the plan was Daniel Bryan but due to injury, became John Cena) and go on a crazy PPV-exclusive win streak until he would eventually drop the strap to Roman Reigns, coronating the Roman Empire as the company’s new top babyface. Well bad booking decisions, Lesnar re-signing and getting over to a massive degree pretty much flipped those plans out, and as a result the impact of the streak kind of lost it’s meaning to some.