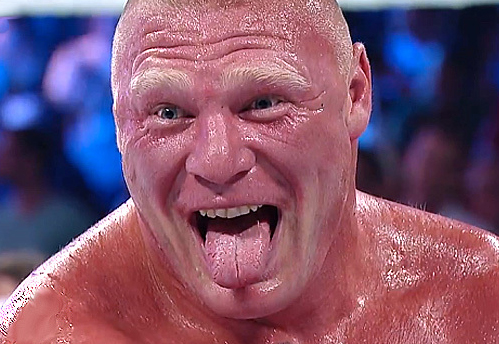 This is the last of five columns remembering the Brock Lesnar and Undertaker PPV matches.

At Battleground, the Undertaker interrupted Brock Lesnar’s WWE World Heavyweight title match against Seth Rollins, causing Brock to win by disqualification. This was revenge for Lesnar beating the Undertaker at WrestleMania 30 and also, to setup the SummerSlam match.

Brock Lesnar Vs The Undertaker At SummerSlam 2015

With cautious apprehension would be a fair way to describe how people approached the most recent Lesnar vs. Undertaker match at SummerSlam. After all, the WrestleMania match from 2014 was a huge disappointment and nobody knew just how much Taker had left.

Well, all cautious apprehension went out the window fast as this one got under way in a hurry with Brock charging across the ring like a bull and attacking The Dead Man before he had even taken off his robe. Disrupting the pomp & pageantry of Taker’s entrance set the tone for this match and how both men were going to approach it. This wasn’t going to be a spectacle or a larger than life show – no, this was going to be a fight! A down and dirty, gritty, hide behind the dumpster FIGHT! If Brock’s charge didn’t sell you on that fact, then Taker’s response with HUGE punches (getting all tangled up in his coat and not giving a f*ck) certainly hammered the point home. Brock took this crazy bump to the floor which has become a staple of his arsenal since returning to WWE in 2012. Ladies and gents, this was on!

As they settled into the action, we got Brock’s first suplex and it was of the overhead belly to belly variety. The crowd, who were on fire since the opening, loved it. One German Suplex later, and Brock loudly proclaimed that this was indeed Suplex City…BITCH!

I loved how Taker turned the tide. As Brock was looking for another German, he was met by the most perfect of counters. Undertaker simply using all his strength to fall forward and bring Brock with him face first into the turnbuckle. The guttural scream of exertion that Taker let out while performing this act was marvelous. Taker got the better of a duel on the outside which included him breaking out his big apron leg drop (after giving a “well screw it, hips are overrated” look to the camera before hitting it). It took until this point, 6 or 7 minutes in, before we saw our first glimpse of Paul Heyman’s reactions. His face told as good of a story as the match was at this point.

We then get my favourite passage of the match. Brock hits a big F5 through the table to kill Taker. Then for several minutes (literally nearly four or five I think), nothing happens…BUT SO MUCH IS HAPPENING. The facial expressions, the body language, even the announcers made this period of the Undertaker trying to get back into the ring, while Brock stood tall, so perfect. Taker acts as if he’s done but as Brock moves in for the kill, he gets caught with legitimately one of the greatest chokeslams of all-time. Seriously, if you don’t believe me, re-watch this. It was amazing. The timing, Taker’s face, Brock’s bump. It was majestic. That gets followed up with a Tombstone which Brock kicks out of and both men are out. Then we get the spot that will no doubt live on in video packages for years to come. The double sit-up, double cackle, double throwdown. What a moment it was. It was without question the peak of the match.

Things fizzled out a bit from here but it was still damn good. They hit some big moves and then we had the angle for the finish. I know it’s had it’s fair share of critiques and at the time I hated that such a great match ended like this. But on re-watch, knowing the story, I think this was so amazing. Taker was turning into a cheating bitch out of desperation was the most genius thing they’ve done with his character in years. It was kinda goofy but Brock’s attempt at celebrating his victory before turning around was hilarious – “I WON!!! *raises arms*” I WON!!!!” There was nothing comedic about how he ended this though. The defiant middle finger as he passed out in Hell’s Gate was a stroke of genius and the perfect way to end what I feel was a classic WWE main event. This worked on so many levels – as a big time match, as a tool for character progression and storytelling and simply as a fight! Great great stuff.