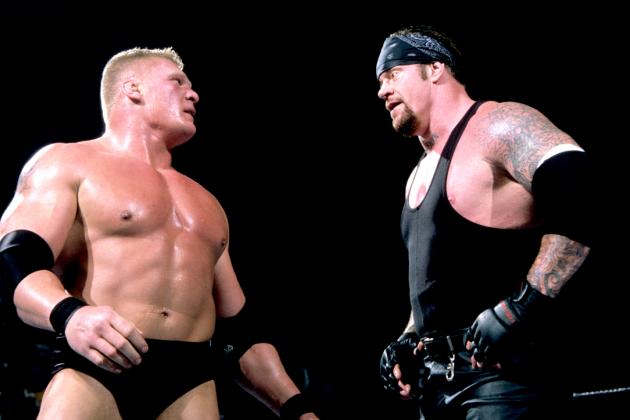 This is the third of five columns remembering the Brock Lesnar and Undertaker PPV matches.

If you missed them, you can check out our other columns on the Brock Lesnar vs Undertaker feud. 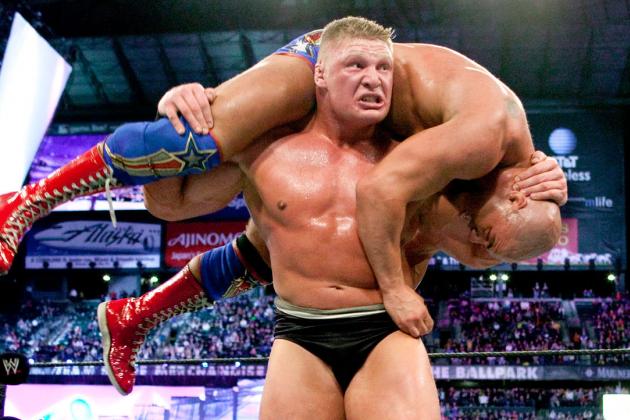 On the September 18th Smackdown, Brock Lesnar beat Kurt Angle 5 falls to 4 in an Iron Man match for the WWE Championship. The following week, the Undertaker crashed Lesnar’s ceremony and Stephanie McMahon (who was feuding with her father and would have a match with him at the PPV) announced that the Undertaker would face Brock Lesnar at the next PPV. On the following week’s television, it would be announced as a Biker Chain Match

Brock Lesnar Vs The Undertaker At No Mercy 2003

It’s strange seeing Taker walk Brock down and Brock backing away from him at opening bell. It’s just not something you’re used to seeing happen these days. This is a much different story from the one they’re telling in 2015 though. Here, Taker is presented as arguably even more imposing than Lesnar. The match is booked like a true monster battle. Both guys take turns to knock the stuffing out of each other, but neither is ever really able to get an upper-hand. Every time you think Brock is about to take over, Taker stands tall and cuts him off.

It’s mostly big time brawling with a small amount of big-time bumping mixed in. Taker has a really rough looking collision with the steps early on. Then there’s a pile driver spot which I’m still amazed got green-lighted even 12 years ago. There are some huge powerbombs, there is a beauty of a top rope chokeslam and a handful of other major moves, but they keep them to a minimum and make each one really count.

Ok, so onto the finish. I can’t believe I’m saying this: The FBI ran in and got the heat on The Undertaker. This set him up to wipe the lot of them out with his WrestleMania dive to the floor. Then just as Taker had the biker chain in hand, Vinnie Mac (fresh off his win over his daughter earlier in the night) appeared and pushed him from the top rope. This allowed Brock to recover the chain and bust The Dead Man’s head with it for the three. That end bit wasn’t great admittedly, and it’s by no means one of Brock and Taker’s better matches together, but overall it was a fun battle of the beasts and another good match in a series of good matches.