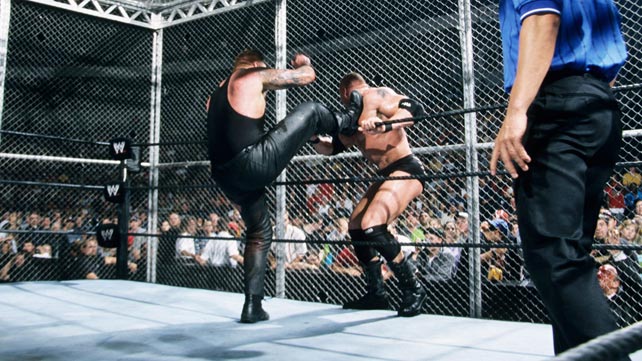 This is the second of five columns remembering the Brock Lesnar and Undertaker PPV matches.

I must confess that aside from a few local independent wrestling shows and this past WrestleMania, I have not seen any wrestling in a long time. I am not sure if that helps me or hurts me here as I have nothing to compare or contrast, but it is what it is. Here we go, Hell in a Cell from No Mercy 2002.

The commentary team of Michael Cole and Taz were kind enough to remind me that Brock had attacked Undertaker and broken his hand, Undertaker was a tough SOB and unfazed by the injury and they would meet in a hell in a cell match for a shot at the title. Not only would the fight take place in a cage, but Undertaker would be allowed to use his cast a la Cowboy Bob Orton.

They met at the previous PPV and it ended in a no contest.

Brock Lesnar Vs The Undertaker At No Mercy 2002

I thought this match would be a new one for me, but as the match started I was pleasantly surprised to find that I vaguely remembered the match. No Mercy was probably the last WWE PPV that I purchased.

I’ve seen enough cage matches to know two things. One, most don’t include much actual wrestling. And two, there will be blood. Part of me was excited to see these guys brawl it out and part of me was disappointed because I’ve always considered both of them, at least at that time, to be excellent workers for such big men and a really well executed match from them would be a pleasure to watch. Alas, under the circumstances leading to this match, there was no way these two were going to shake hands like gentlemen and let bygones be bygones while they grappled without trying to commit grievous bodily harm to one another.

Both contestants make their way to the ring and are locked in Hell while Paul Heyman paces around in Purgatory and the fans are in Heaven. Once the door closes, the two combatants get right down to business. I like that. Five minutes of Brock dominating in the ring followed by 5 minutes of Undertaker dominating as they throw each other against the cage. The match psychology plays out as you would expect it would with Undertaker wanting to beat Brock into submission with the cast and Brock wanting to remove the cast and prey on Undertaker’s weak spot.

Undertaker gets in some decent looking offense and splits Brock’s forehead open with the cast. Brock is bleeding and Paul Heyman is screaming like his ass is on fire. Heyman is soon a bloody mess after Taker kicks the fence into his face, grabs his tie through the cage and pulls on it like he’s trying to pull start a lawn mower, slamming Heyman’s face into the cage with each jerk of the tie. Several slams into the fence later, Brock comes to the rescue. But no~!, Undertaker moves and Brock slams into his manager sending Paul ass over applecart into a heap on the floor. Undertaker must have eyes in the back of his head or some sort of demonic power to sense when he’s about to slammed through the fence like a hunk of meat through a Play-Doh® Fun Factory.

Brock gets some offense in and uses Heyman’s belt to loop around Undertaker’s cast while Paul pulls the end of the belt to hold Undertaker’s arm against the fence. A chair emerges and much mayhem ensues as the hand and cast are repeated beaten. Tensions are high, I’m on the edge of my seat, yet somewhere in the back of my mind I am wanting these guys to get back into the ring. Cast off, hand pummeled. Deadman making more noise than will be heard from a dead man again until “The Walking Dead” premiers on AMC. Taker’s dive through the ropes to the outside hits as much of the cage as it does Lesnar. Taker lands some sweet looking kicks from his back to the side of Brock’s head. Brock comes back. It is a cage match after all so Taker needs to bleed.

Undertaker gets cracked in the head with the metal ring steps. Taker has blood spurting from his head like Lesnar struck oil. Mission accomplished! *FINALLY* both guys are in the ring again. As we get close to the 30 minute mark, the fans and I can sense that we’re coming to a close. The final series of near falls looks good as Undertaker nearly finishes Brock with a choke slam, DDT, and Last Ride, all to no avail. Time to break out the finisher. As Undertaker starts to line up the Tombstone, Lesnar goes over his back, bends Taker over backwards, powers him onto the shoulders and lands the F5 for a clean 3 count. Much celebration ensues on top of the cage.

Listen, there was nothing mind-blowing in this match, nor anything particularly technical or graceful. As a matter of fact, it was largely repetitive and predictable with two big men pounding the snot out of each other for 30 minutes. It was, however, enjoyable and entertaining as both guys kept up a good work rate and made the brawling look reasonable believable. As much as I might have liked this to start off with more in ring action and then deteriorate into a brawl, that just wasn’t an option based on the build to the match so I cannot be disappointed or fault anyone with the booking. Going in you knew what you were going to get and the match delivered as promised. Sometimes that’s all you can ask for.

Brock Lesnar vs The Undertaker (No Mercy 2002… by puropwgwwestuff