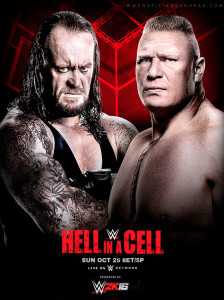 Earlier this week, we took a look back at all of their PPV matches. And Cadillac Don ranked them all as well.

You can check all of those out here below:

We’ll be back for Hell In A Cell live coverage.

This was a surprisingly quick match. Del Rio did many of his old spots and won by escaping the AA, dropping Cena’s back on his knees and hitting him with the Superkick while Cena was on his knees.

It was an okay match, but far too fast to really sink your teeth into. Del Rio got a nice reaction and a good one when he won.

Like you’d expect, there was a ton of plunder. Bray got a kendo stick and was lighting Roman up with it. He set up a chair that was perched into the fence so it was sticking out, ready for someone’s head to be run into it. But Reigns got the kendo stick and then found another and went to down on Bray and ran Bray’s head into chair.

Bray set up a table on the outside and hit a Rock Bottom on Roman from the apron and through the table. Reigns got him back as Wyatt perched Reigns on the top rope after putting a table in the ring. He tried to superplex him through the table, but Reigns blocked him and eventually powerbombed him through it for a two count. Reigns reversed the Sister Abigail for a two and the hit the Superman punch for a two. This is really good stuff.

Reigns and Wyatt were out on the apron and Reigns speared him from the apron to the floor and through another table. They took a while to get into the ring so it was only a two count. Reigns set up for the spear, but Wyatt kicked him in the face and the hit the Sister Abigail for a great two count.

Wyatt stuck the kendo sticks into the turnbuckles and was going to push Reigns’ face into them, but Reigns got the sticks and hit Wyatt, set him up for a big spear and won the match. It was excellent.

The Dudleys got one over on Kofi early and Big E pulled him out of the ring to regroup. Back in, he took more of a beating, though the Dudleys screwed up a double team spot. Big E was tagged in and immediately got the heat on D-Von. He hit the big running body block on him and then the big jumping splash. They were going to do the Wazzup spot, but Kofi was pushed off.

Bubba came in and they did the Wazzup spot. Kofi grabbed the trombone and threw it to Bubba and fell down as if Bubba had hit him with it like the old Eddie Guerrero spot. The referee almost bought it, but didn’t. The Dudleys hit the neck breaker spot and were about to hit the 3D. But Big E hit Bubba with the trombone and Kofi hit the Trouble In Paradise on Bubba for the win.

The wrestling wasn’t particularly noteworthy, but they brought the physicality. In one funny spot, Nikki jumped off the middle rope to kick Charlotte, but Charlotte got out of the way. Nikki still slapped her leg anyway.

Charlotte got the Figure 8 on Nikki, but Nikki got to the ropes. Nikki had Charlotte on the top rope and Charlotte did a backflip off the top and Nikki nearly fell onto her ankle. That wasn’t smooth even though Charlotte is athletic as hell. Outside the ring, Nikki tossed Charlotte back first into the apron which didn’t look fun.

Back in the ring, Nikki tried to hit Charlotte with the Rack Attack, but Charlotte slipped out and looked to roll her up, but instead finagled her way into the Figure 8 and Nikki had to tap.

Paige beat Becky Lynch to the ring to celebrate with Charlotte.

Seth worked really hard with Kane here. He won after Kane tried to give him the chokeslam, but he kicked him and then hit the pedigree.

Seth did his normal bouncing around for Kane. He powerbombed Kane through the Spanish announcer’s table and it didn’t break which made it look pretty harsh.

The match was good, though I don’t think the fans really bought Kane so there wasn’t a ton of heat.

The match was short with Owens winning with the Pop-up Powerbomb for a clean pin. There was one guy in the crowd chanting for Goldberg so Ryback gave a Goldberg-like body slam early on. He tried to press slam him, didn’t get him, but still got him for the delayed suplex.

Brock Lesnar Vs The Undertaker

Amazing heat from the start. Taker rammed Lesnar’s head into the steel post and Lesnar started bleeding like crazy. He got the chair and blasted Taker twice with it. Lesnar took off his glove and punched Taker on top of the head. Looks like Taker is now busted open.

Taker took the chair and put it under Brock’s chin and rammed it downward, causing it to spike his throat. Lesnar started taking Taker to Suplex City. He German’d him three times. Then he hit two F5s for two counts. He bashed Taker with the steps for another two count.

There was a doctor in the ring checking Brock’s cut and Taker. Brock pushed him down, so the doctor is probably a plant. Brock tried to bash Taker with the steps, but Taker kicked the steps back at him and he fell backward and the steps hit him in the face. Taker then put the Hell’s Gate on and Brock got out of it and started hammering him with ground and pound.

Brock peeled back the canvas, exposing the boards underneath. Taker turned the tides and chokeslammed him on the boards. He then hit the Tombstone for a close nearfall. Taker was ready to end Lesnar, but Lesnar hit him with a low blow and then the F5 on the boards for the win. This was a great match.

The crowd was yelling thank yous at Taker after he finally did the sit up. He was ready to walk out and the Wyatts’ music started. All four of the Wyatt family came out to destroy the Undertaker.