Nothing strong went head up with Floyd Mayweather’s supposed retirement fight, but before we get to the rest of the stories, I wanted to let Bay Area people know about Premier’s 10th show this weekend.

As many of you know who read us, John LaRocca, who helps us with our UFC previews, runs an independent wrestling company called Premier. On Saturday, Premier runs their 10th show in San Jose at Del Mar High School. You can get tickets on their website.

We interviewed the two competitors in the main event; Jeff Cobb earlier in the week, and JR Kratos last night.

John will join me in a few days to talk about the show, preview Bellator, and discuss the Wrestling Observer Hall Of Fame on the next FGB Radio.

Let’s get to the stories.

– Cactus Jim and I were in Houston, Texas on 9/11/01 and we went to the live Smackdown show two days later. I still remember Lilian Garcia’s National Anthem.

– WWE announced the signing of Kana to the NXT brand and she will go by the name of Asuka.

– Bellator has its Fan Fest Friday night in Milpitas, CA. You have to subscribe to their newsletter in order to go.

– The latest TUF season has started and Conor McGregor and Urijah Faber are going to yuck it up all season.

– It sounds like TJ Dillashaw vs Dominick Cruz and Anthony Pettis vs Eddie Alvarez will both happen on FS1 on 1/17 in Boston. That’s a helluva FS1 show and probably head up with some playoff football.

– This is a cool story on the future of UFC Fight Pass.

– It looks like Bradley vs Rios is happening now. I don’t know if Joel Diaz was standing in between of the fight happening, but it sounds like it.

– Finally, Joe Frazier has his own statue. This is what it looked like last year.

@FloydMayweather you're trash dude, can't even REMATCH me!!! Bertoooo…damnnnn

5. Bayley vs Sasha Banks, in a 30-minute Iron Man match, headlines the next NXT Takeover. 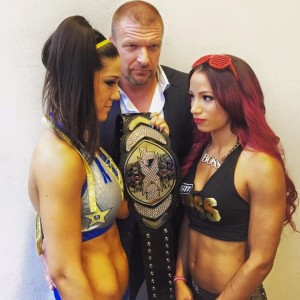 – It looks like the NXT women finally get the main event spot. While I’m not necessarily a fan of the Iron Man match because it takes away some of the drama of a normal match, it does give the match a special feel.

Can they improve on their fantastic match from the Brooklyn Takeover show? Probably not as that match was one of the best matches of the year. But still, this is a big step in the right direction when it comes to diversity in the product. I just wish WWE would follow suit in how NXT is presenting women’s wrestling.

According to Dave Meltzer, Dynamite is Bellator’s WrestleMania. They’re going to run a few “big” shows each year, with Dynamite being the biggest one.

On paper, it’s clearly an interesting show. They’re working with Glory to add kickboxing matches to the show, placing a ring and a cage in the same building.

The draw for the show is Tito Ortiz taking on Bellator lightweight champion Liam McGeary. They’re also holding a 4-man one night tournament featuring Phil Davis, King Mo, Emanuel Newton, and Linton Vassell with the winner getting the next title shot.

3. Ronday Rousey is possibly out of WrestleMania.

Ronda Rousey’s schedule just got busier. Variety reported that she’s going to star in a remake of Road House. They also added that production for Mile 22, another movie she’s tied to which is going to be directed by Peter Berg, will start in February, theoretically taking Ronda out of plans for WrestleMania.

If there was anything must-read last week, it was Thomas Hauser’s piece on USADA, mostly concerning Floyd Mayweather. Nice timing on that one.

Some of the things Hauser wrote about included:
– An IV for Mayweather after his weigh-in for the Manny Pacquiao fight that wasn’t run by the commission or cleared by WADA
– A retroactive TUE for Mayweather
– Contract negotiations about PEDs and retroactive TUEs in case someone failed

It paints a negative picture on both USADA as an organization and Mayweather as someone who seemed to go out of his way to make sure that his fights were clean. With Mayweather’s retirement, it’s unclear if Hauser’s story will have legs as it pertains to Floyd, but it should be a bigger story down the line, even in MMA as USADA is in control of the UFC’s recently more stringent drug policy.

If you missed Mayweather’s casual destruction of Andre Berto, we had the live play by play.

Watching the fight made me think that if anyone other than Oscar De La Hoya had the blueprint, it was Marcos Maidana. Mayweather used his left forearm and his elbows to essentially move Berto anywhere he wanted to move him. Berto wasn’t strong enough to fight through it and it threw his entire game off. Maidana’s rough style (in the first fight) and De La Hoya’s strength enabled them to not be so thrown off by Mayweather’s style. But Berto, who came in 2 pounds light, couldn’t really move Mayweather at all.

As for Floyd’s retirement, I wrote on Friday that I hope he does walk away from the sport. But if he doesn’t, that’s his prerogative as well. I’m not sure if boxing is necessarily better off with the Floyd Mayweather show, but he is the box office and PPV king and that still means something.