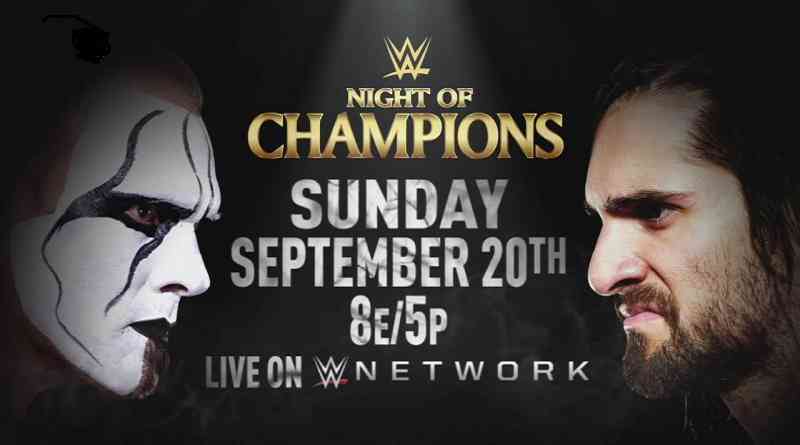 Welcome to our Night Of Champions play by play. Seth Rollins is working twice. There will be a mystery partner. And we’ll hear a few, “You still got it,” champs for Sting.

In the pre-show match, Stardust pinned Neville as the Ascension and Stardust beat Neville and the Lucha Dragons.

Ryback sort of pressed and tossed Owens over the top rope early. That can’t be a fun bump for someone who weighs as much as Owens does.

Owens worked on Ryback’s shoulder, which played into the match. Ryback finally got the upper hand and went for the Shell Shocked. The referee was behind both of them and Owens raked his eyes. Ryback dropped Owens and Owens rolled him up for the win.

They announced that not only is Brock Lesnar headlining the live Madison Square Garden show on the WWE Network, but he’d be the next guest on the Stone Cold Podcast and then face The Undertaker at Hell In A Cell.

They’re bringing that one back already? Wow.

The entire match was Rusev beating on Ziggler who was selling fairly well. It wasn’t as comical as usual, but he still doesn’t get much sympathy.

Rusev had Ziggler ready for the Camel Clutch, but he slipped out and hit a superkick for a great two count.

Summer Rae, who was wearing so much dang bronzer on her face that she didn’t look like the same person, came into the ring and then was kicked out of the match. As she was leaving, she tried to throw a shoe at the referee who ducked and she hit Rusev who was hit with a Zig Zag and pinned.

Why would she throw a shoe at the referee anyway since it would DQ Rusev? Not sure.

The New Day Vs The Dudley Boyz

Early on, Big E was telling Bubba Ray that he was too old and needed to give it up. The Dudleys were about to win, but Xavier Woods interfered. New Day was about to put the Dudleys through the table, but instead, Xavier Woods went through it. Entertaining, but nothing you could sink your teeth into.

Nikki came off the top rope and Charlotte speared her. Then she put her in the Figure 8 to win. Charlotte is crying. Flair is in the ring. And they’re trying to celebrate hard, but very few in the crowd cared.

It’s not the best third partner they could do, but it’s better than who I expected; Rowan. And thankfully, it wasn’t Kane.

The match was fast paced and pretty fun. Jericho hit all of his signature spots. Reigns and Ambrose were on like it was the Shield. Reigns finally had a beat on Strowman after a Superman punch and was ready for the spear, but Jericho tagged himself in. He hit the Lionsault and then tried to hit the Code Breaker, but Strowman caught him like the old Rick Rude backbreaker. Then he turned him over and planted him face first. Then he put him in the 2015 version of the bear hug and Jericho went to sleep.

Ambrose and Reigns tried to check on Jericho, but he shoulder bumped Ambrose and walked out.

The match seemed to be booked to make Rollins look like the best wrestler in the world as he was really impressive. He did a superplex off the top rope and floated over, only to immediately give Cena another suplex. He also did some impressive power stuff with picking up Cena from a deadlift to give him a powerbomb.

Cena won the match with an Attitude Adjustment after hitting him with the leg drop off the top.

Cena has the US title again. Seth tried to leave but Cena gave him another Attitude Adjustment on the floor and rolled him back in, giving Sting, the babyface, a head start in the main event.

It was again the Rollins show, so it was entertaining. Sting’s offense was consistent of Stinger Splashes, a Death Drop, a dive to the outside, and a couple of Scorpion Death Locks.

Rollins and Sting were fighting on the announcers’ table and Rollins pushed Sting backward and he crashed on the Spanish table. He was selling his back throughout.

There was a weird spot in the match where Rollins tossed him into the buckle, back-first and Sting wobbled and Rollins had to tell him what to do. Then the doctor came into the ring and Sting was woozy. If that was planned, maybe it was to tell the story that Sting was old?

They restarted the match like a UFC match after a low blow and Sting put Rollins in the Scorpion. Rollins got to the rope. Sting tried it again, but Rollins rolled him up for the win.

Sheamus came out looking to cash-in and booted Seth. As they were going to start Seth’s third match in a row, Kane came out. He immediately went to Rollins and chokeslammed him. Sheamus told him to do it again, but then Kane chokeslammed him. He then hit the Tombstone on Rollins to close the show. Yes, Kane stood tall to end this show.