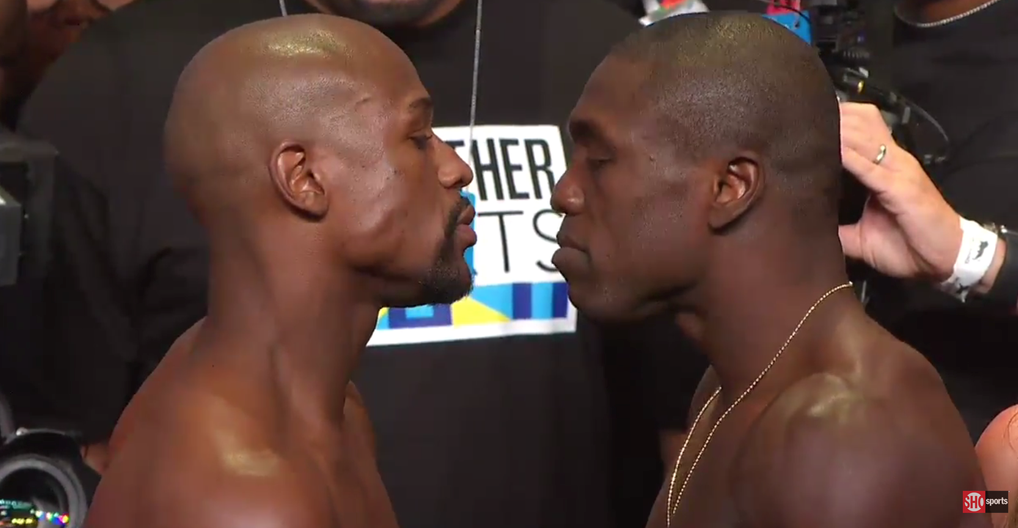 Is Floyd Mayweather truly walking away after Saturday?

I don’t think many people believe that Floyd Mayweather is going to actually retire. There’s still far too much money to be made in future bouts against Manny Pacquiao or Miguel Cotto or whomever else he wants to fight. But with the small possible chance that he’s being honest in his personal assessment, that he is retiring to help take care of his uncle Roger, then I do want to make sure I see him go out.

I like watching excellence. Even though I wasn’t a huge fan of the UFC’s Anderson Silva, I was a fan of his excellence. Silva had a few scary moments during his run, but the best part about watching him was knowing that no matter what, he was going to come out on top and you just wanted to see how.

With Mayweather, it’s slightly different. When I watch him, I feel like I’m watching one of the best ever at his craft. It’s similar to watching Barry Bonds in the 2000s. Bonds was the opposite of likable. But when he stepped in that batter’s box, you knew that there was no other person in the world who was better at that job than him.

Most boxing fan favorites are action fighters; guys who slug it out and try to give the fans value for their dollar. In fact, Jim Lampley from HBO Boxing has the Gatti List (in honor of Arturo Gatti), which is to showcase fighters whose heart is often larger than their overall talent.

While I do enjoy action fights as well, I have an issue morally with what I’m watching as a fan. I have an issue with watching guys take years off their life because of what their job asks them to do. If it’s a fight in which guys are boxing and using their talents and in doing so, providing tons of action, that’s more so my kind of fight. If it’s a brawl where the end goal is to see who can take the best shot, my stomach turns.

Mayweather’s pick of Andre Berto seems to stem from the fact that he took so much flack for the Manny Pacquiao fight being boring, when in reality, it was simply a normal Floyd Mayweather fight. He and his camp believe that because Andre Berto is athletic and usually has action fights, this will be an action fight and people will get off his back.

But it also stems from the fact that Mayweather didn’t seem to want to test himself against the best possible competition out there like Keith Thurman. For fight 49, Mayweather both wanted an action fight, but not one that would truly test him on his way out. And again, if he decides to fight again, that Thurman fight will be out there if he wants it.

But the choice of Berto has proven to be a terrible one. It’s not Andre Berto himself. Berto is a likable guy and he is an entertaining fighter. He’s just not the one that people want to see Floyd facing at this moment. I think Mayweather’s true selling power is in giving fans hope that he can lose. With Berto, there’s no hope. With Pacquiao, there shouldn’t have been much hope either, but there was, and it had been a fight that people wanted to see for years and years.

Then again, even if Mayweather did fight Thurman, hardcore boxing fans would’ve been happy, but it’s not like anyone outside the hardcores know Thurman. So Mayweather was possibly in a no-win situation for this one anyway.

Mayweather will never win in the eyes of the public. The hardcore boxing fans and media will say that he’s not nearly as good as record when it comes to the all-time greats because of his competition. He never had to fight the caliber of Sugar Ray Leonard, Roberto Duran, Marvin Hagler, or Tommy Hearns.

Because of that, I do hope Mayweather walks away. Not because I think it will be best for boxing. But mostly so he can get out of boxing with all his faculties in tact and stay out of the circus. And he won’t have to answer questions about things written by Thomas Hauser. Can he stay away? I don’t think so. But I wish for his sake, he did.

I did want to give my prediction for the fight, which is of course that Mayweather easily defeats Andre Berto. The only worry for Mayweather fans should be if he wants to prove that he can be an action fighter when he wants to. If he wants to mix it up with Berto, he could get hit a little bit, but that’s also going to be bad for Berto. Berto will take punches to give them and it usually doesn’t bode well for his face.

I actually see Mayweather ending this one before the final bell in the twelfth round because of cuts on Berto.