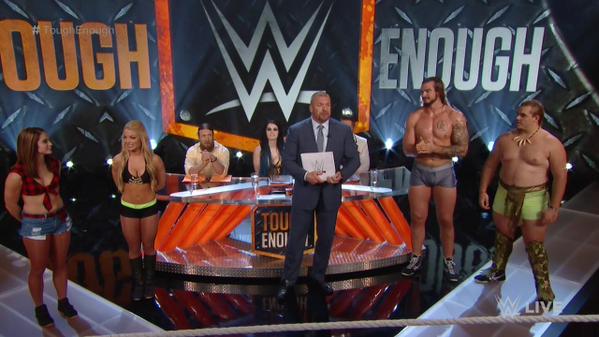 It’s ZZ vs Josh and Sara Lee vs Amanda. There will one male and female winner each.

Amanda called Sara Lee out for being a ring rat, saying that she’s sleeping around with the wrestlers. Sara says Amanda isn’t just playing a bitch, she is a bitch.

They go to the ring and Chris Jericho is in there with Booker T, Billy Gunn, and Lita. They’re preparing for a live TV match.

They’re going over their characters. Josh wants to stay the Yeti. ZZ wants to be the King of the Bayou. Amanda wants to go as Mandy Sax. And Sara Lee wants to become Hope.

The coaches tell them that they’re going to have their matches not against each other, but against Cesaro and Alicia Fox. Hmmm. You couldn’t get Natalya?

Alicia slaps her right out of the gate. I think Mandy was supposed to do either a spear or a Thesz press and she messed it up. Twice. She was nearly slammed on her head for a nearfall and then didn’t sell. This is the worst match of all-time. She takes a clothesline right on her neck. She hits the Stratusfaction, which I believe is her finisher and only gets a two count. Then she remembers to sell. Alicia kills her with the old Harlem Hangover.

Miz says there were things she did well and bad. Paige says she looks fantastic. Things didn’t go well but she carried on. Daniel Bryan says the match was sloppy, but they brought the intensity.

She said Alicia Fox would become a footnote in Hope’s career.

Her offense looks much better than Amanda’s early on. Her selling is also much better. I think Mandy was just really nervous. She hit a nice neck breaker and went for the armbar, but that wasn’t very smooth. Alicia poked her in the eye and she sold that well. She ate the Hangover too and it was game over.

Miz liked her promo. He doesn’t like her outfit though. Paige thought her entrance was dull, but thought she did pretty good in the match. Daniel Bryan thought she needed more energy in the entrance, thought the promo was good and she was hesitant in the ring, but the match was good.

The King Of The Bayou Vs Cesaro

ZZ comes out with an Alligator Head. It looks cumbersome. He’s also not wearing a shirt. He said he’s wrestling for the baby gators who helped him get this far. And he shouted out his coaches. He asked if Cesaro was ready.

ZZ tried a headlock, but Cesaro threw him off and took a headlock of his own. ZZ leapfrogged Cesaro and dropped down possibly when he wasn’t supposed to. Cesaro deadlifted him and suplexed him and then gave him the big swing.

ZZ uppercutted him and rolled him up. Then he went for the flapjack and his gator bite submission, but Cesaro turned it into a crossface and won.

Bryan said that he thought ZZ did great in the ring, except for not being able to get down on the drop down soon enough. Paige said he should’ve showed more personality in his entrance. Miz thinks he can’t do more than a two minute match and questioned his work ethic.

They didn’t time this thing well and are hurrying.

He does a bit of a wannabe New York accent which seems to be a mistake. He should use his regular voice. His shorts are also a little high.

They had a good lockup. Cesaro killed him with an uppercut and did a big stomp on him. They did a suplex spot and neither could get it and we got another big swing. Josh tossed him to the corner and then forgot his spot. Cesaro had to push him back into the corner, but Josh reversed it and then seemingly forgot his spot again. He hit the big clothesline in the corner and the Oklahoma Stampede, but Cesaro kicked out, hit his Neutralizer and it was over.

Jericho immediately said he looked like he belonged. They’re trying to get the voters to vote for Josh. Miz said he hated Josh’s outfit. Paige thought the promo could’ve been stronger and said he was her pick to win it. Bryan said the voting will be interesting because he thought ZZ put on a strong performance.

Triple H is out to award the contracts to the winners.

And the winners are…

Final thoughts: They did a great job at selling out ZZ there in the end even though Josh probably wins anyway. And this thing was Sara Lee’s to lose from just about week one.