It was SummerSlam week on the website, or SummerSlam throwback week specifically. Before we get to the stories from the week, here’s a list of all of our SummerSlam content.

Let’s get to the stories. Here’s what missed the top five: 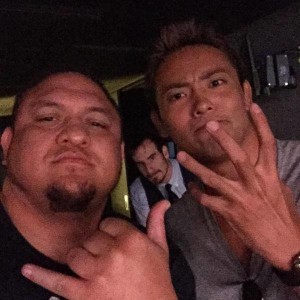 – Hey, look who was hanging out with Samoa Joe in the SummerSlam luxury box.

– CBS Sports put together an oral history on the year 1985.

– We’re in the stretch run for Tough Enough. Tuesday is the finale. Last week, they cut down to four.

– Grantland did a story on New Jack of all people.

– NXT is headed to the UK late in the year.

– I need to see Okada vs Strong.

– A hint that WrestleMania 33 could be in Minnesota.

– If you missed AJ Lee, she’s in the new Madden commercial.

– Jose Aldo might want to think twice about taking IVs after weigh-ins.

WWE and Brock Lesnar was all over ESPN last week building up to SummerSlam. An ESPN host asked Brock about the recent comments Dana White made about wrestling being fake which made some wrestlers and wrestling fans lose their minds. Brock acknowledged White’s statement and used it as a way to compare the two businesses as being nearly identical. He also threw a little jab at his former boss White in comparing him to McMahon.

4. Cotto and Canelo are set to embark on a four city promo tour.

The four city tour kicks off today in Los Angeles and then will hit Mexico City, New York, and Caguas, Puerto Rico, according to Dan Rafael.

There was a Golden Bay presale today, per Jake Emen’s website. And they will go on sale officially tomorrow.

3. NXT Takeover: Brooklyn was the WWE show of the weekend.

While SummerSlam was more glitz and glamor and will receive the more of the fanfare from the media, NXT Takeover was actually the better wrestling show. Then again, that’s what that product is designed to be. While SummerSlam had Jon Stewart and the Undertaker and Brock Lesnar, NXT quietly (or not quietly based on the fact that they had 13,000 plus fans in attendance) had the best wrestling of the two shows.

(I haven’t seen any of the ROH stuff from this weekend, but I’ve heard great things. See the above link in the wrestling section.)

Sasha Banks is far and above, the best female wrestler under the WWE umbrella and her match with Bayley is on par with Seth Rollins vs John Cena and had the better overall finish. Kevin Owens and Finn Balor had an exceptional ladder match as well, even if it was overshadowed by the women’s match.

If you haven’t seen it, go out of your way to check it out.

2. Ronda Rousey will face Holly Holm (and not Miesha Tate) at UFC 195.

In a fairly big surprise, Holly Holm was chosen as Ronda Rousey’s next opponent. I’ll have a longer form piece about this during the week, but I don’t think it’s a terrible choice. And I do think there’s more thought behind it than just, “Well, Miesha’s lost twice to Ronda already.”

I don’t know Holm’s pay structure, but I do remember her coming into the UFC wanting a higher pay structure than Dana White had offered. So it’s possible that the UFC is trying to get some return on investment. But it wasn’t too long ago that White said she needed a few more fights before getting the fight with Ronda.

Miesha Tate was none too happy and didn’t find out she wasn’t getting the fight until everyone else did.

The Undertaker’s match with Brock Lesnar at SummerSlam was much better than people thought it would be and the finish set up some possibilities for a future bout. Danny and I discussed some of the possibilities on last night’s FGB Radio SummerSlam recap.

And then there’s this story about the Undertaker collapsing after the match last night. It seems pretty dramatic and may be a work, but I guess we’ll find out tonight. If they focus on that part, it might be and if they don’t, it probably wasn’t.

SummerSlam all in all was a fun show, though the four hours did make it feel a bit long. The weekend seems to have been a success so I imagine we’ll see SummerSlam presented in this way next year as well.