We’re going to be doing some looking back at SummerSlams of yesteryear starting this week. Look forward to reviews on SummerSlam 89 and 96 soon.

This is what I’d consider one of the few slow weeks in combat sports. But, there were still stories to write about.

These missed the top five.

– NXT Takeover in Brooklyn is sold out according to Triple H.

– Lucha Underground closed out its first season with no new tapings on the horizon. It seems that they’re hoping to get restarted by early 2016.

– Ronda Rousey donates her UFC title to a school in Brazil.

– On Saturday’s UFC Fight Night from Nashville, it wasn’t a good homecoming for Ovince St. Preux who lost to Glover Teixeira. There was controversy in the semi-main event as most people thought Michael Johnson beat Beneil Dariush, but Dariush was the one whose hand was raised. 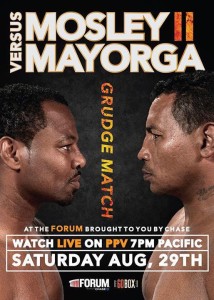 – I’m not sure who watches Mosley Vs Mayorga II, but it’s coming.

– If you ever wanted to know who Floyd Mayweather thinks are the five best fighters of all-time, now you know.

– Keith Thurman is upset that Berto is Mayweather’s opponent and not him (read the top story below). Thurman’s just too good for his name value right now.

– You can read about the politics behind Beterbiev and Kovalev not happening right now.

The WWE Network advertised that Stone Cold Steve Austin was going to interview Sting, the Undertaker, and Hulk Hogan some time back. But when Hulk Hogan was fired from WWE, there was no mention of Hogan’s replacement until just a few days prior. And I’m not sure anyone thought it would be Paige.

Paige has a super interesting background, but because she’s not a money player or a decision maker, this was the first Stone Cold Podcast on the network that I’d call not must-see. Every other one, including Chris Jericho’s network podcasts, had something to see because of the guests. But because Paige is still a newcomer in comparison and simply doesn’t carry the clout of Vince McMahon, Paul Heyman, Stephanie McMahon, Triple H McMahon (just kidding), and John Cena, there was nothing compelling about the interview.

But I’m a Paige fan. I find her quirky and charming. So I found entertainment value in it. But I’m going to guess that a lot of folks may have skipped this one. You can watch it on the Network.

Johny Hendricks vs Tyron Woodley (which is a cracking fight) has been added to October’s UFC 192. Robbie Lawler vs Carlos Condit headlines UFC 193 in Australia.

On paper, these are fantastic fights. But the main question from fans is probably why Condit gets the title shot over Hendricks and I don’t think there’s a good answer for that. Condit lost to Woodley because of a freak injury and Hendricks beat Condit over two years ago.

But my guess is that the main reason for UFC shuffling the deck is because they didn’t want to go back to the Hendricks/Lawler well so soon. They fought twice in 2014 and probably wanted to wait until 2016 to go back to that fight if they have to.

3. Triplemania struggles on US PPV.

All you needed to do was read Court Bauer’s Twitter feed to see how frustrating last night’s Triplemania card was. There were audio issues from the start and Bauer apologized early for the issues.

Nothing is more frustrating & devastating than the production issues with the audio we’ve had tonight. No excuses. You deserve better.

He also reached out to people tweeting at him all evening, apologizing for the issues.

But the audio issues weren’t the only problems with the show. I only saw the main event, but joined friends who watched the entire show and they said in addition to the audio problems, the show was just not good. Dave Meltzer’s live coverage had this line about the Villanos and Psycho Circus match: “Holy shit. Think of the worst match that you ever saw. That would be a fantastic match compared to this.”

I personally thought the Rey Mysterio vs Myzteziz match was clunky early and slower than I expected, but turned out fine in the end. Myzteziz’s heel turn at the end was weird and didn’t make a ton of sense. And then Konnan came out to continue the Mysterio beat down, but the show went off the air with at least five minutes left.

Konnan turns heel as the ppv goes off the air. #TriplemaniaXXIII has been a comedy of errors

2. Tito Ortiz and Cyborg say that the UFC offered them a fight with Rousey.

This situation is a bit weird. Tito Ortiz isn’t Cyborg’s manager anymore because he feared that his feud with Dana White would hurt Cyborg. So instead, as her non-manager, he spouts off about the UFC offering Cyborg a fight with Ronda Rousey. Dana decided to shoot down Ortiz.

I’m not lying nor is Tito- UFC called my manager last Sunday to see if I would fight Ronda at 135 on December 5 at… http://t.co/pF2VJdRuEU

And then she trolled Dana.

Really? @danawhite
UFC not contacted my manager after the fight Ronda. @RondaRousey @ufc

I’m not sure that Cyborg is necessarily following protocol here considering she’s the one with little leverage.

There is a ton of risk in making this fight because Cyborg has yet to prove that she can make the weight. If they go on with the fight and she misses weight, what happens from there? The UFC puts Ronda in a bad spot of having to go on with a fight against someone who didn’t make weight and it changes the entire dynamic. In making the fight, you’d probably have to add 135 pounders onto the show as possible replacements just in preparing for the worst case scenario.

I personally don’t think they should make the fight so soon. Make Cyborg make the weight first in a few test fights and then move on from there. Give her Alexis Davis and then Cat Zingano. If she wins quickly, you can compare it to how quickly Ronda won those fights. There’s no lost opportunity here in building the fight as long as Cyborg wins. Mayweather vs Pacquiao was supposedly five years too late and made more money than any fight in history.

I don’t think this one was much of a surprise. And they decided to go away from a free TV bout too as this is now on PPV. It’s a complete disappointment from a fight perspective. I’m not sure what the expectation is here. Maybe Showtime and Mayweather believe that because of how much business the fight with Pacquiao did, there’s too much equity in Mayweather to fail. But I don’t know that they understand what happened with the Pacquiao bout.

Millions of new fans purchased that fight and didn’t get what they wanted. Those fans are probably gone. What you’re going to get here are the hardcore Mayweather fans and those who buy into the hype that Mayweather can create in the next month. Our own Duan thinks this does the lowest number of any Mayweather PPV post-De La Hoya. And he might be right.

I still think this is simply a cushion bout for when he returns for fight number 50 sometime next year. Sadly, I would bet on it being a rematch with Pacquiao rather than a fight with Amir Khan or Keith Thurman.