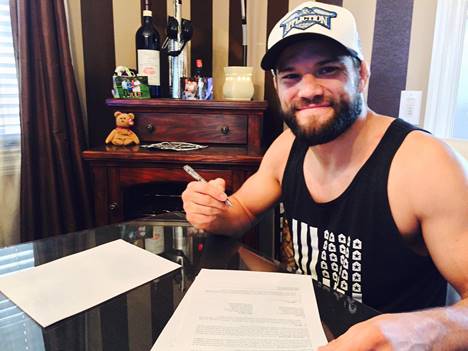 After the UFC declined to re-sign Josh Thomson, it was logical that he’d sign with Bellator to fight under Scott Coker who ran his former home, Strikeforce.

According to a Bellator press release, that’s exactly what happened.

Thomson was on a three-fight losing streak, though he took Ben Henderson to the limit in January 2014, losing a fight by decision that many people thought he won.

Bellator’s press release is below.

SANTA MONICA (August 11, 2015) – Bellator MMA is proud to announce the signing of Josh “The Punk” Thomson (20-8, 1 NC) to an exclusive multi-year, multi-fight contract. At 36-years-young, the former Strikeforce Lightweight World Champion remains one of the top 155-pounders in the sport, having competed in top organizations including UFC and Pride.

Residing in San Jose, Calif. and training at the renowned American Kickboxing Academy alongside some of the sports very best, Thomson earned his Brazilian jiu-jitsu black belt under Dave Camarillo. In addition to his formidable ground game, Thomson’s striking pedigree is on-point as well, earning a “Knockout of the Night” award for his output in his fight against Nate Diaz in 2013. It’s also worth being said that “The Punk” holds a record of 3-0 in professional kickboxing.

“I had the pleasure of working with Josh in Strikeforce and I look forward to continuing this relationship in Bellator MMA. Josh is a world-class mixed martial artist and we are very happy to be adding him to our roster of some of the best lightweights in the world,” said the promotion’s president, Scott Coker. “Bellator remains fully committed to building its roster by signing top free agents like Thomson, as well as grooming up-and-coming blue-chip stars. We have some amazing matchups in mind for “The Punk” that we hope to be announcing in the weeks to come.”

“I’m over here reading this UFC reporter saying that they’ve declined to re-sign me when the truth of the matter is that they’ve been trying to re-sign me for my last two fights. I declined and instead chose to fight out my contract and test the free agency market with Bellator. At that point, Bellator made me an offer that the UFC was unable to match given their relationships with FOX and Reebok. It’s a done deal, I’m back working with Coker, and I couldn’t be more excited to get back to an organization that is trending upwards with fighter-friendly contracts. Any intelligent fighter is going to go where the money is, and for me the money was at Bellator.”

“The Punk” joins a prominent list of athletes that have recently signed with Bellator over the past year including: Phil Davis, Josh Koscheck, Melvin Guillard, Ed Ruth, Aaron Pico, Lorenzo Hood, Ewerton Teixeira, Gleristone Santos, amongst others.

He will continue to fight in the lightweight division which is deep starting with: kingpin Will Brooks, down to other fighters like Michael Chandler, Marcin Held, Dave Rickels, Patricky “Pitbull” Freire and Dave Jansen.