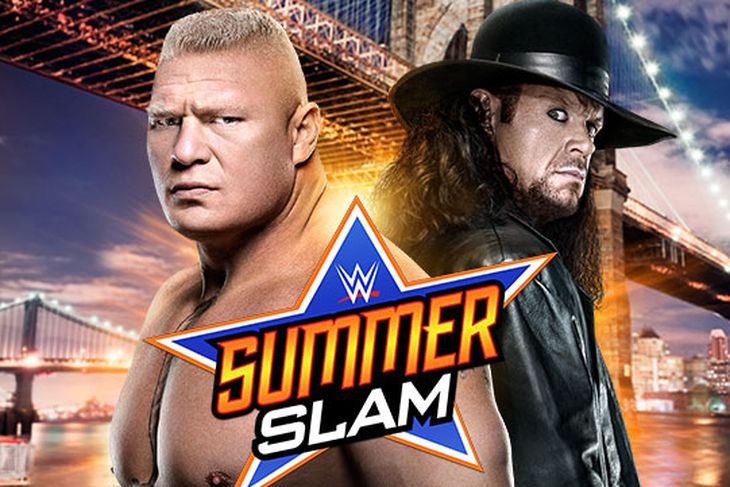 Join us for our SummerSlam live coverage.

SummerSlam feels like the hottest its been in quite some time. They hit a home run last night with NXT Takeover: Brooklyn and it will take a helluva show tonight to top it.

Jon Stewart is out to talk to the crowd. He’s looking quite old now that he’s not on TV every day. He said he wants to interview Brock Lesnar, but because he’s not strong, he’s having Mick Foley help him out. Foley said he was confused and thought he was helping interview Rock, not Brock. They’re already teasing the Rock.

Even though they’re opening, they didn’t speed up their match. This is normal Orton/Sheamus pace. Orton teased the RKO on the opening lockup.

They are being really creative with reversals and not a chinlock to be found so far.

Orton has created yet another way to hit the RKO. The guy is awesome.

Sheamus hit two big boots in a row; one that sent him into the turnbuckle and then one in which he hit the ropes. That was a really good opener.

The New Day came out singing their own version of Alicia Key’s hook for Empire State Of Mind. They have a future in crooning.

Darren Young was selling for much of the match and he finally made a tag to Titus who ran wild. There’s a ton of plundering going on here. It’s high spot city. The Young Bucks need to be in this match.

It’s hard describing what is happening. Titus powerbombed one of the Matadors, Kofi kicked Titus before the pinfall and then pinned the Matador. New Day celebrated like there was no tomorrow.

Lana is dressed like she’s an early 90s rocker fan with her jean jacket and jean skirt.

The guys worked hard, but I don’t think they were able to follow the chaos and charisma of New Day. To me, Ziggler will always be a guy who has all the tools, but will never get it. All of his whacky selling and bumps gets old after a while.

Rusev did some great stuff in the match. He’s so dang athletic.

The match ended in a double countout and both Lana and Summer Rae were involved. It feels like we’re setting up for a mixed tag.

Stardust and Wade Barrett Vs Neville and Stephen Amell

I thought we’d see Neville do a lot of selling to set up Amell for the hot tag, but it’s the opposite. Amell’s first move in the match was to kick Stardust in the chest as hard as he could.

He had to sell too much for his wrestling experience and a lot of it looked weak. Even his dive off the top to the outside didn’t look good. He kind of dove sideways. Neville got the win with the Red Arrow.

The Big Show Vs The Miz Vs Ryback

I’m not sure they had a really good idea for this match. It was just there and even when Ryback won, they quickly went to a backstage segment with Jon Stewart and Paul Heyman. Ryback won after Big Show knocked out Miz.

Jon Stewart went to Brock’s dressing room. Paul Heyman came out and Stewart asked him about breaking the streak. Heyman started singing Glory Glory Brock Lesnar. He told Stewart that WWE must’ve not been able to get David Letterman.

The Wyatts Vs Roman Reigns and Dean Ambrose

This match was kind of a mess and the crowd was dead for it. Whenever Reigns tagged in, he got booed mercilessly. Ambrose had to do a majority of the selling, which means it was comical at best. He hot tagged Reigns in twice and each time, Reigns was booed terribly. He was booed so badly that it seemed like they should’ve called an audible and turned him heel immediately. It seems like that’s the only way the crowd is going to accept him. Or, at least a big match crowd like this.

Reigns speared Bray to win the match for his team.

This was a very good back and forth match. Rollins had his working boots on and then some. This may be his best big match performance so far. He got tremendous height on his frog splash. He did an awesome double stomp on Cena who was locked in the tree of woah.

Cena kind of no sold the frog splash and herked him up to give him the AA. Rollins kicked out. Rollins then herked Cena up similarly which was terribly impressive.

He also did the move of the night.

As good as this match was, the finish was hoaky. Jon Stewart came out with a chair and was teasing hitting Seth with it but also teased hitting Cena. Instead, he hit Cena, left the chair, and Rollins hit the pedigree on Cena to win the match.

There were some diving spots early. Naomi did a flip dive and Charlotte had to catch her. That didn’t look fun. Sasha may have clipped her feet on the ropes on her dive. Then the Bellas dove through the ropes. Paige then did a front flip and everyone caught her.

Brie Bella pinned Tamina and Team BAD was eliminated. Sasha went from the penthouse to the outhouse very quickly.

Nikki hit the Rack Attack on Becky, but Paige and Charlotte broke it up. Long heat spot on Paige before the hot tag to Charlotte who ran wild with chops. Charlotte had Alicia Fox in the Figure 8, but Brie broke it up. Brie was on the top and yelled “Brie mode!” And then she fell off the top rope from being drunk. Okay, just kidding. She missed a side kick from the top and then Becky Lynch put her in her version of the Rock Bottom.

The crowd was dead, but Cesaro was on fire. Owens wasn’t his normal self, but I’m not sure how he could be considering he was in a war last night.

This was a really strong match and kudos to Cesaro for having that extra step in his game tonight.

I’ll let Senor Lariato tell the story of the match in GIFs.

Okay, that last one wasn’t by Lariato.

Brock Lesnar Vs The Undertaker

Lesnar jumped Undertaker once he got into the ring and was kneeing him in the corner. Taker came back with a big boot and a clothesline over the top rope.

After giving him several suplexes, Lesnar gave him a F5 on the announcer’s table.

Lesnar is busted open. We haven’t seen this much blood in quite a while. Lesnar just told Taker, “Come on, I’ll kill you, you sonuvabitch.” Taker said, “You’re gonna have to.” And then he gave him a chokeslam. He then gave Lesnar a Tombstone, but Lesnar kicked out.

They were both on their back and Lesnar sat up first and starting laughing. Taker sat up too and mocked his laugh and punched him. They punched each other while they were on the ground.

Brock had Taker in the corner and put him in the kimura. But Taker lifted him up for the Last Ride and a near fall.

Lesnar then hit Taker with a F5 for a nearfall. Lesnar gave him another one and Taker kicked out yet again. Taker looked hurt and Brock slowly went to attack him and Taker put him in Hell’s Gate. Lesnar got out and put him in a kimura.

The bell rang, but we don’t know why. The referee tried to count Brock’s shoulder down for just a one count. But Taker didn’t tap.

Lesnar raised his arms up like he won. Taker gave him a shot to the nuts and locked in Hell’s Gate. Lesnar didn’t tap and gave taker the finger. Then he passed out and the referee called for the bell.

In the replay, Taker did tap, so Lesnar should’ve won.

The Undertaker Tapping but missed by the ref #SummerSlam pic.twitter.com/tBcdy6xeTB