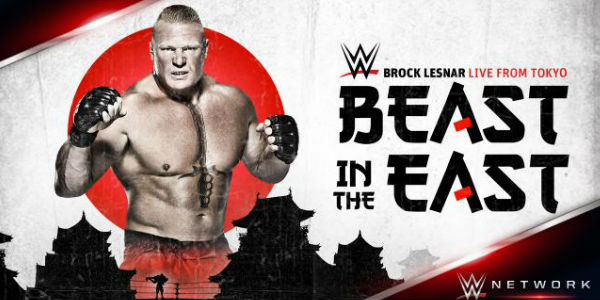 We don’t have live coverage, but we’ve still got Beast in the East play by play.

The show is at the Sumo Hall in Tokyo, Japan.

Michael Cole and Byron Saxton are calling the action.

Jericho is doing summer house show matches. This is the only televised match on his summer schedule.

The match wasn’t terribly different from what you’d expect between the two. They went back and forth a bit more pace-wise. Jericho busted out a, “C’mon baby!” which he doesn’t do anymore. Neville went to the top for a Red Arrow and missed and Jericho took control. He hit a Lionsault after Neville hit a standing shooting star. Neville went to the outside and springboarded himself to the top rope. He dove at Jericho who turned it into a Codebreaker for a two count.

Neville blocked a German and hit one of his own. He then hit two superkicks in a row, setting up the Red Arrow. He went to the top, Jericho got his knees up, and immediately put on the Walls of Jericho. Saxton threw out the Liontamer name. Neville tapped.

It was a very fun opener.

Paige Vs Tamina Vs Nikki Bella

This was a decently entertaining three-way with Nikki and Paige using double team moves to fight off the bigger Tamina. Tamina missed the Superfly splash off the top rope and Nikki hit a forearm smash for the win.

They played a cat and mouse game early on. Brock chased Kofi into the ring and Kofi threw some kicks at him, but Brock no-sold them. He hit 3 German suplexes and a F-5 to win the match.

After the match, he hit another German and then another F-5 and Xavier Woods and Big E came out. They ate F5’s as well.

It took two Coup de Grâce finishers to beat Owens, but Finn Balor is the new NXT champion. Owens mimicked John Cena’s moves early on, following Cena’s pattern into the 5 knuckle shuffle. Owens controlled the match, though Balor would get some nice moves in and take over for small amounts of time.

Owens tried the pop-up powerbomb, but Balor jumped over him. He sent him into the corner and did the diving footstomp in the corner and finally hit the Coup de Grâce for the win. It was a good match that built up well by the end.

Tatsumi Fujinami came out to shake his hand. Owens looked like he was going to, but left the ring.

King Barrett and Kane Vs Dolph Ziggler and John Cena

This was a fairly long match with lots of Dolph Ziggler selling. Based on your love of Dolph Ziggler’s selling will probably determine whether you liked the match or not.

It was all to set up a hot tag to Cena who did all of his signature stuff and then hit the Attitude Adjustment on Barrett for the win.