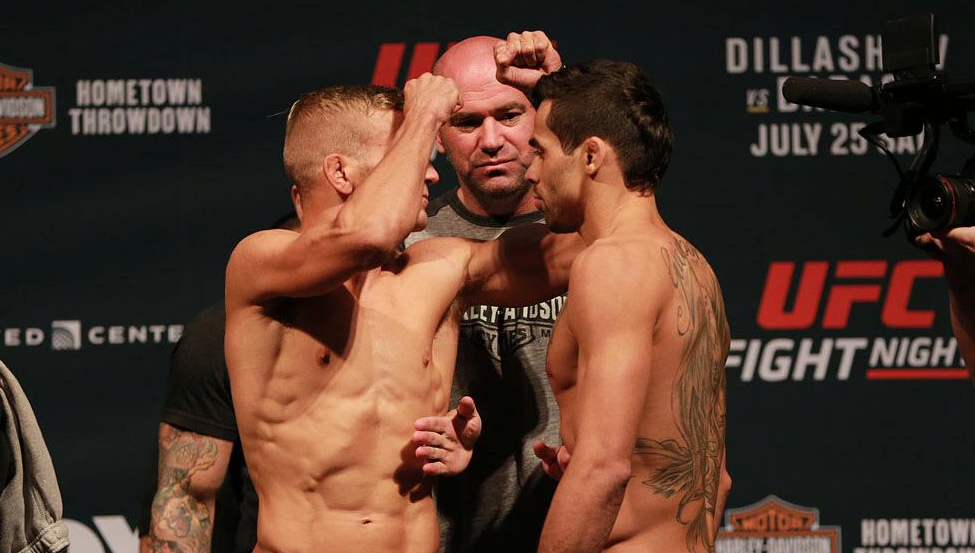 While the main event isn’t a huge draw, it’s a great fight for Fox.

We’re one week away from Ronda Rousey night, but this card should be a fun one for Fox. T.J. Dillashaw has a chance to show that his last fight against Renan Barão wasn’t a fluke, while Barão can prove otherwise. Also, the UFC’s second highest profile woman fighter, Miesha Tate is in action. If she wins, does she get Ronda again?

In addition to the FGB crew, included in our picks are John LaRocca, president of Premier Wrestling, the hardest working woman in MMA, Heidi Fang, and our jiu-jitsu expert, Alex Goff.

Here’s our UFC on Fox preview:

Heidi: Jessica Eye
Miesha Tate has gone to great lengths to improve her game in all areas. Since relocating to Las Vegas, the most noticeable change has been her striking. However, Eye’s standup game is crisp and fluid, engaging on the feet with her could be a mistake. At UFC 180, Eye took home a much needed and vicious win over Leslie Smith, a grizzled veteran of WMMA. Eye’s also improved her mental game and focus, making her a more dangerous, all-around athlete. If this fight stays on the feet, I have Eye taking the W.

Duan: T.J. Dillashaw by 3rd round TKO
The first time these two fought, I didn’t think there was a way for Dillashaw to win. Now, I can’t see how he could possibly lose. He just seems to be the wrong match up for Barão. TJ dominated every aspect of that first fight and there really wasn’t anything you could point to that Barão could do differently in a rematch. If anything, I see the gap between them being even wider on second go around.

Alan: T.J. Dillashaw by decision
From all accounts TJ is taking to the role of champion well, ramping up his training and trying to really position himself for a long run.

I think he will be the smarter, more disciplined fighter against Barao. He may not get the finish this time but I think he’ll sweep the rounds and win a comfortable decision.

Alex: T.J. Dillashaw by decision
I remember writing how Team Alpha Male fighters didn’t have what it took to beat the champions representing Nova Uniao. I was incorrect as T.J. Dillashaw did just that as his pace was too much for the champion. I don’t think the fight will play out the same way, but I do believe Dillashaw will win. I don’t feel great about it. Dillashaw isn’t a world beater, and Barao was once considered one. This should be an good fight.

GG: T.J. Dillashaw by decision
I think Barão has to come into this fight in better shape than the last one. But, you have to wonder whether he can make the weight safely after the last mishap which caused him to be replaced before. And from a styles match-up, Dillashaw just seems to be a bad one for him.

If we think Dillashaw is better prepared and in better shape and a hard match-up for him, I think I have to lean Dillashaw no matter how scary Renan can be.