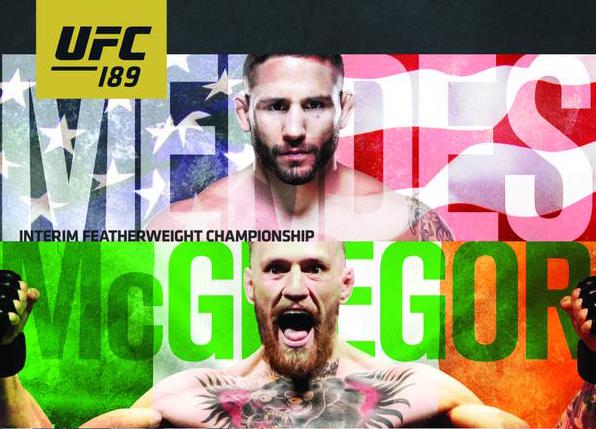 The time has finally come for UFC’s big show of the summer. They announced that next year on July 2nd, UFC 200 will be held at the new arena. I can only imagine what kind of show that will be.

We’re going to be back with full-on live coverage of every fight on the card as we’re in the building for the event. Check back here when the prelims start. 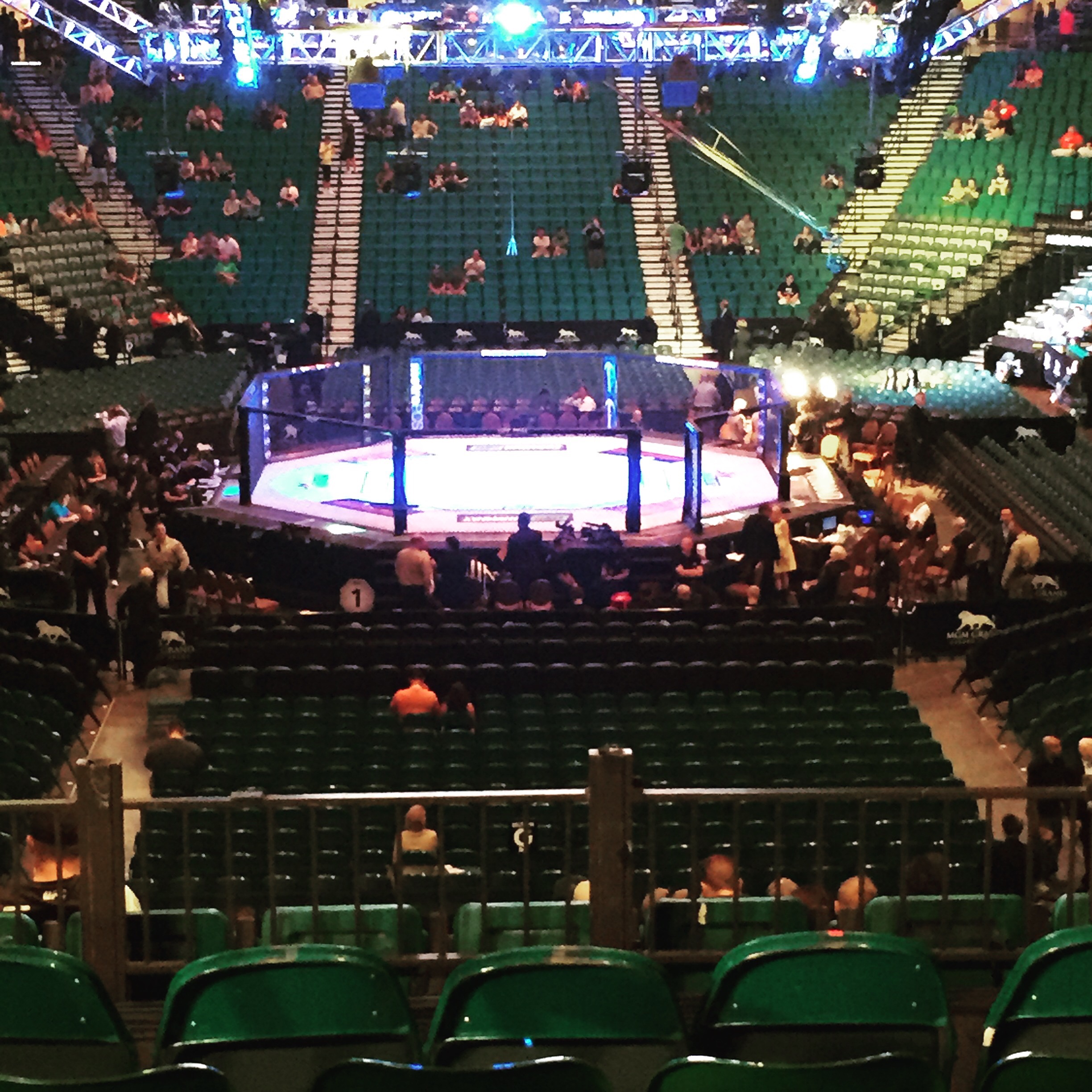 Welcome to our UFC 189 live coverage.

Pfister set the tone and paced the round. But him coming forward meant that he ate tons of leg kicks from Cedeno. That will probably slow Pfister down. He looks to be trying to set up the head kick as the knockout blow.

Pfister went for the takedown and got it early in the second. He got Cedeno’s back but Cedeno swept him and ended up on top in his guard. Ref stood them up. Pfister got an immediate take down. He ended up mounting him, but Cedeno bucked him off to end the round.

Pfister figured that wrestling was the best way to win the fight and simply continued to take him down. Cedeno couldn’t get back to his feet.

Seery, with just a 1/3 full building, received a louder crowd reaction than any Demetrious Johnson fight. The reaction for Conor McGregor is going to be insane.

Seery started quickly and the crowd was going nuts. Looks like they clashed heads as there’s some blood. Seery had a guillotine in, but Smolka had a deeper one in. Neither guy looked to be close to tapping.

Seery tried an arm bar off his back. Smolka was catlike quick in getting his back. Seery is like Ricky Morton. He’s getting beat up, but gets his hope spots in and is always fighting back.

Seery had another guillotine locked in, but otherwise was tossed around. Smolka had him in an arm triangle late and he never gave up. Kept trying to punch out of it until the bell. That was a fun scrap.

Urijah Faber is in Garbrandt’s corner.

Much of the round consisted of posturing and feinting until the end. Garbrandt is trying to load up in his right hand. Briones may have slipped, but Garbrandt was laying in the ground and pound looking to finish. Briones may have been saved by the bell.

Garbrandt put Briones down with a right and it looked like it may have been done. But Briones was able to get back to his feet. Briones is tough, but Garbrandt can punch.

Briones fought much tougher than an 11-1 underdog should. Garbrandt is going to win the fight easily, but Briones landed some shots too.

I thought the entrance for Pendred was going to be more subdued but then the Irish crowd started singing and it became great.

First round wasn’t much but you’d probably have to give it to Howard. Lots of stalling. No engaging.

Howard’s trying his best to come forward but Pendred is fighting such a defensive style that it’s nearly all for naught. Howard caught him with a few shots late in the round.

Entrance was by far the best part. Pendred had Howard in a weak guillotine. Then they played patty cake for the rest of the round.

Garcia scored a takedown and Swick had to fight off his back. Swick’s defense looked good on the feet, but he didn’t do much.

Swick couldn’t do anything with him. He was taken down again and unsuccessfully fighting from the bottom. Garcia should win this one.

One judge gave Swick a round.

Maybe Matt Brown can save us from decision hell.

And he did. Means was competitive, busting up Brown with short elbows. But Brown stopped him with guillotine.

Winner: Matt Brown by way of 1st round submission

Pickett’s in there banging. He busted up Almeida’s nose and put him down. He caught him with a knee to the face. Almedia put him down late in the round. Already better than nearly everything on the prelims except for Matt Brown. The Irish fans started to sing, “Where the fuck is Aldo?”

Almeida came in with switch-knee that Pickett didn’t see coming and put him out.

Winner: Thomas Almeida by way of 2nd round decision

Let’s see if they can match the pace of the last two fights.

Nelson absolutely dominated this one. He put Thatch down with a jab and then right hand that nearly dented his face. He took his time on the ground and sunk in a rear naked choke for the tapout.

Winner: Gunnar Nelson by way of 1st round submission

That’s three good ones in a row.

Tons of blood coming from Stephens. His head was leaking. Bermudez was the aggressor, going for takedowns and using leg kicks. Stephens stayed calm after all the blood and seemed fine.

Both guys had good rounds. Stephens landed the bigger shots, but Burmudez still landed more of them. He put Burmudez down twice.

And then he knocked him out. Stephens put Burmudez down again with a beautiful jumping knee and finished him on the ground.

Winner: Jeremy Stephens by way of 3rd round TKO

Very much a feeling out round. Robbie wanted to get in there and throw, but Rory was very patient, looking for openings. He tried one takedown but Lawler shut it down. Might lean toward MacDonald slightly.

That was a good round for Lawler. MacDonald may have landed more punches with some nice combinations, Lawler’s punches did more damage. MacDonald is bleeding from the nose it looks like.

Holy cow. Lawler was attacking MacDonald’s very bloody face. MacDonald was still patient, trying to land the headkick and finally did. He wobbled Lawler and had him in deep trouble with his back against the cage. Could be a 10-8 round.

MacDonald was very measured and precise and only made one real mistake in the round, a shot attempt that Lawler blocked and left MacDonald open for a blasting. I have Rory up 3-1.

Robbie Lawler just happened. He forcefully stalked MacDonald, landed a left hand and may have pushed MacDonald’s nose upward. MacDonald covered up and it was stopped. What an amazing and insane fight.

Winner: Robbie Lawler by way of 5th round TKO

If this thing delivers, we may have the best main card in UFC history.

McGregor got in a bit of trouble early on his back but he was up quickly. He used his length with his striking, not even putting his hands up, daring Mendes to strike with him. Mendes grabbed a huge takedown. Mendes has cut McGregor’s eye open. Mendes scored another takedown and is so quick and strong on the ground. McGregor has no answers for him on his back.

Winner: Conor McGregor by way of 2nd round TKO