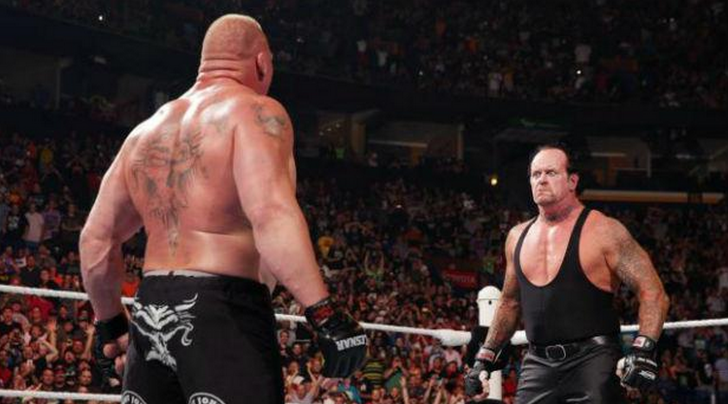 I apologize for not doing the Top Five last week, but since I was out in Las Vegas for UFC 189 and wasn’t back until Monday, it didn’t make a lot of sense to try to put this column out a day late. So instead, I recapped the UFC 189 weekend.

Duan and I will release the third Fabulous Four podcast, on the first Sugar Ray Leonard vs Thomas Hearns fight, on Wednesday. On Tuesday, we’ll post our write-up about the fight as a whole.

– I’ve really enjoyed some of the recent wrestling podcasts that I’ve heard lately from Stone Cold Steve Austin and Chris Jericho. I’ll just link to two of them. Austin talked to Johnny Mundo/Morrison about his role in Lucha Underground. I know this one is from a couple weeks ago, but Jericho’s podcast with TJ and Nattie was also excellent.

– Jushin Liger is going to be at NXT Takeover in Brooklyn, on the same night that ROH runs the area with a big show featuring NJPW talent. It’s an interesting dilemma for ROH since NJPW is their US business partner and this seems to be a clear punch in the face by WWE. Or maybe this is their public shot at ROH to say that they’re coming after them.

By the way, even though it’s entirely expected, I don’t understand why WWE would want ROH out of business. ROH does a better job at farming talent for them than NXT does.

– Best of luck to Kurt Angle who had to undergo a second emergency surgery on his neck this week.

– MVP tweeted that he was done with TNA.

Yes. It's true. And I'm sorry. But MVP and the BDC are gone from TNA. pic.twitter.com/Ll28c4myl2

– Dana White says that Ronda Rousey and Conor McGregor would rag-doll Floyd Mayweather. Well, they would in a grappling match since train in grappling.

– Speaking of Ronda, after winning Best Fighter at the ESPYs, she got her long-awaited shot in on Mayweather.

Excited 4 fight but even happier about being home and training. No more travel soon. I'm not losing this fight! DC

– Chris Mannix wrote a piece on the end of Don King’s career.

– Usually, any Floyd news is worthy of being big news, but I’m just not feeling this one. The possible fight with Andre Berto is the least interesting one of his current run and the fact that it may be on CBS rather than on PPV is more a win for PBC than anything else. I also don’t know how Mayweather can earn what he’s used to earning while not generating PPV revenue. This one is a head scratcher to me.

– Now this one on the other hand, is something to look forward to. While I’d imagine that an actual Ward vs Kovalev fight would be a ways away, I do like that they’re talking about it now.

– Julio Cesar Chavez Jr. struggled with his weight again, but beat a smaller man.
And now, onto the top five.

In a news story that didn’t seem to get enough play for whatever reason, Carl Froch retired.

I'm officially retired from Boxing. So much to say & so many people to thank. But for now, I just want to say THANK YOU to my amazing fans.

Froch will join Sky Sports, per the Daily Mail. Rather than try and create something one more time, his last stand will have been the fight at Wembley Stadium against George Groves, which drew 80,000 people.

That’s the way to go out Cobra.

Kevin Iole wrote early in the week that the UFC may shoot for the huge stadium later in the year.

While that may be fine and dandy and could gain some nice press for McGregor as a draw if he were able to get half of the stadium filled, I think it would be best to keep him in Vegas. The Irish fans showed that they’d travel to see him, much like Ricky Hatton’s fans did for his fights. But two things happen if you book it in the stadium; it becomes less about the overall gate and more about filling up seats and you have to test to see if his fans will travel to a non-destination area.

I’d do whatever it took to keep McGregor in Vegas unless you want him in front of his hometown fans.

Aldo, by the way, recently said he wouldn’t cooperate with new laws that say you can’t use IVs to rehydrate after weight cutting. Might need to cut off a leg to make 145 at this point.

It very much seems like Fedor Emelianenko is going to come back and whether it’s the UFC or Bellator, the defining factor will be money. Why else would he even come back?

I’m sure he can still very much compete at the top of the heavyweight division in Bellator, but I’m not so sure that’s the case in the UFC. You’d probably favor Fabricio Werdum, Cain Velasquez, and Junior Dos Santos to beat him. But as you get into the middle of the heavyweight division, there are some winnable fights for him with guys like Andrei Arlovski and Frank Mir still around.

But what about Randy Couture? Duan mentioned it last week and Couture himself was asked about it.

If I was retired and could change my sleeping schedule completely, I’d be trying to watch the entire G1 Climax tournament which began last night. Hiroshi Tanahashi beat Kota Ibushi in what was supposedly an incredible match.

Mike Sempervive wrote a tremendous three-part preview of the tournament, including lots of historical information.

It seemed that the live crowd really enjoyed the Undertaker coming back last night to attack Brock Lesnar during his title match with Seth Rollins. But those of us watching on TV were left scratching our heads. The Undertaker looked old, he and Brock are technically babyfaces (I guess) even though Taker acted like a vengeful heel, and it didn’t really seem like the way things should be going.

It made Brock lose steam and also made the champ, Rollins, seem like a major afterthought. Overall, Battleground was pretty darn good with John Cena and Kevin Owens having the best match, albeit with a less than great finish.

So what does this mean for SummerSlam? Will we see the WrestleMania 30 rematch? It’s also rumored that Sting will be part of WrestleMania, possibly teaming with Roman Reigns in his journey to get back at the Wyatts.