Before we even get the Top Five started, this post is dedicated to the life and times of “The American Dream” Dusty Rhodes. Rhodes passed away on Thursday.

My first memory of Rhodes was during a Starrcade ’85 recap made on what I remember to be Pro Wrestling This Week. I was a fairly new wrestling fan, but had only seen WWF. Once I figured out there was more wrestling out there, I tried to find anything I could. I remember Gordon Solie and Joe Pedicino discussing the match and calling both guys by their nicknames. I was nine at the time and logically, to me, Ric Flair looked much more like someone you’d call “The American Dream” and Rhodes, with his obese body, surely looked more like “The Nature Boy.” I was confused.

I wouldn’t really get into the Jim Crockett promotion until the following year thanks to a new subscription to Pro Wrestling Illustrated. One of my favorite things about the magazine is that they would list the back issues and I could kind of put together old rivalries just based on those listings. Guys like Rhodes and Flair dominated the magazine covers so that rivalry meant a lot to me growing up.

While I missed the prime of his career simply because I was born several years too late, I was still a big Dusty Rhodes fan. I loved his promos like everyone else did. And he used to crack me up when he’d do the commentary on PPVs in the early 90s, mispronouncing Japanese names and making up words. What a charismatic man.

From the time I started watching wrestler, there were few guys I saw as bigger stars than 265 pounds of blue eyed soul. Rest in power, Dream. 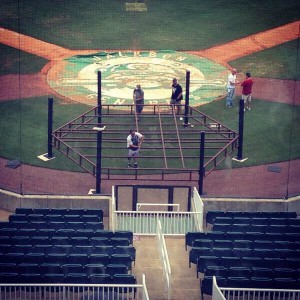 But did they have to use the six-sided ring?

– ROH and TNA ratings were both up on Wednesday night.

– WWE finalized the top 13 for the new season of Tough Enough, which debuts in just over a week. Every single one of them looks like a fitness model of some sort, or someone who might be better running the Broken Skull Ranch challenge.

– There were all kinds of murky issues with Jose Aldo’s drug test.

– Jessica Aguilar signed with the UFC and will face Claudia Gadelha at UFC 190.

– With James Thompson out of the fight with Bobby Lashley on Friday’s Bellator show headlined by Ken Shamrock and Kimbo Slice, Bellator had to find a replacement and found Dan Charles, who is 9-2.

– Brendan Schaub did an interview where he talked about fighting regularly may not be worth it to him monetarily because of the lack of sponsorship money.

– Erislandy Lara and Artur Beterbiev both won on Spike TV on Friday, though one win was far more impressive than the other.

Sergio Martinez announced his retirement from boxing, which most could see was very well coming. After losing to Miguel Cotto when he looked to be a shell of himself, there didn’t seem to be anything left for him, and he didn’t seem to have much left as his great athletic ability was starting to betray him.

Martinez finished his career, going 51-3 with two draws. Fans started taking real notice of Martinez after he beat Kelly Pavlik for the middleweight title in 2010 and then knocked out Paul Williams destructively in the second round, avenging a previous loss.

He’d also beat Julio Cesar Chavez Jr., giving him a boxing lesson until getting caught late, but still outlasting him.

4. Steve Austin Vs Brock Lesnar looks like a no go.

I think most people suspected that this was the case, but according to Dave Meltzer and the latest Wrestling Observer, the match is probably not going to happen.

Meltzer goes into the history of talking about the match, including times when both parties were in town.

Wilder faced some adversity, being hurt in the third round, but otherwise, didn’t have too much trouble with Molina.

It sounds like Wilder will fight once more before his mandatory against Alexander Povetkin before he can even think about negotiating a fight with Wladimir Klitschko.

I don’t know if the match was as good as the first as it was a bit more sloppy, but the crowd surely seemed to think it was. You can read the entire recap on the website.

It’s hard to think that having Cena pin him right in the middle of the ring was the right finish, but having Big Show and Ryback end in a disqualification all but told you we were getting a clean finish.

In more hard to understand booking decisions, Sheamus won the Money In The Bank briefcase and the Prime Time Players won the tag team straps.

Seth Rollins won a long ladder match with a ton of selling by ending up with the belt after he and Dean Ambrose struggled with it at the top of the ladder. They both fell with their hands on the belt, but Rollins hit the mat with the belt in his hands.

Fabricio Werdum upset Cain Velasquez to become the undisputed UFC heavyweight champion at UFC 188. He took advantage of being better conditioned as well as having a reach advantage to gain the upperhand and submit a tired Cain Velasquez. Was it a big upset? I think so. Everyone in our preview picked Velasquez to win.

Werdum has now submitted Fedor, Big Nog, and Cain. He’s cemented himself as one of the best heavyweights in all of MMA.