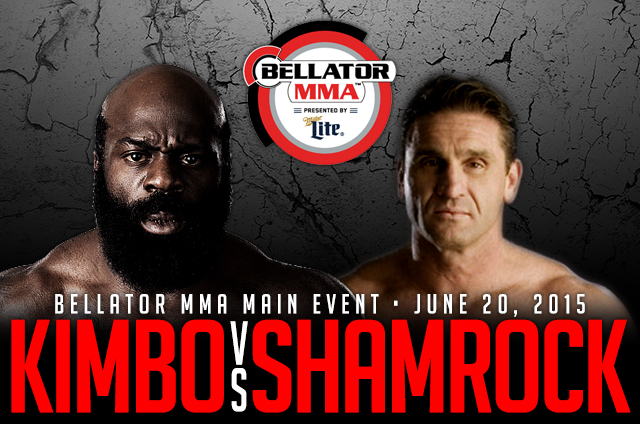 This is Bellator’s big show of the summer.

Chandler is the home town favorite. He got the, “I’m Coming Home” entrance.

These guys came out so fast. Chandler’s jab was on point and he answered a right hand with one of his own that floored Campos. On the ground, Chandler was throwing hard punches and elbows and somehow, Campos got up. Chandler tossed him on his head, went for the choke, didn’t get it, worked it again, and choked him out. Awesome fight.

Winner: Michael Chandler by way of 1st round submission

Straus knocked Corrales with a punch that made it look like he was going to take a Flair flop, but he stayed up. He tried to put him out, but couldn’t. Corrales didn’t really defend as much as he kept winging punches. Corrales was game, but Straus nearly had him in a guillotine as the round ended.

Straus locked in a power guillotine in the second round and tapped him out.

Winner: Daniel Straus by way of 2nd round submission

Lawrence was on The Ultimate Fighter back in the day. He overwhelmed Wilson. He had a few opportunities with a rear naked choke. He caught him with a knee, put him down, and Wilson went down on his stomach and just covered up. Lawrence beat him with punches on the ground.

Winner: Justin Lawrence by way of 1st round TKO

Lashley scored a takedown early. The rest of the round was him pressuring Charles, taking him down, pressuring him some more, and out-wrestling him. We’ll see how he is for the second round.

Charles couldn’t do anything and Lashley kept slamming him, once out of a triangle attempt that turned into a powerbomb, and Charles eventually turtled up and the referee stopped it.

Winner: Bobby Lashley by way of 2nd round TKO

Pitbull is landing his shots, getting in and out. Weichel seems to be having a little bit of issue with his speed. But at the very end of the round, he caught Pitbull and teed off on him. Pitbull looked to be going out, but was saved by the bell. That was crazy.

Weichel looked to be having his way with Pitbull again, but Pitbull hit him with a short left hook and a straight right hand and he stopped Weichel cold. That was crazier.

Winner: Patrico Pitbull by way of 2nd round TKO

Cella had the early takedown and worked his position on the ground for most of the round. They were stood up and Cella put him down with a punch near the end of the round.

Cella had a guillotine on early and continued to work on his positioning. At some point, while on top, his nose started bleeding so Kurtz must’ve caught him with a shot from the bottom. Cella, noticing the blood, seemed to try to work a bit faster. Kurtz pulled an armbar out of his rear end for the come from behind win. That was yet another insane finish.

Winner: Kyle Kurtz by way of 2nd round submission

This fight is actually worse than I thought it would be. Shamrock was moving in slow motion and still got a takedown. Kimbo’s knees look shot. Shamrock was very close to a rear naked choke submission, but somehow, Kimbo got out. He got up way too easy and dropped Shamrock with a short punch and then another that put Ken down. Ken didn’t really want anything to do with the standup game. John McCarthy stopped it before Kimbo could pounce on him.