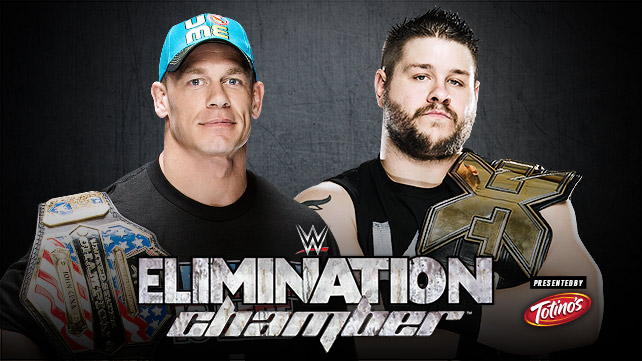 This is an exclusive show to the WWE Network meaning that it’s not available on PPV. It’s also on the last night of the free period for new subscribers so maybe we’ll get something at the end of the show to keep subscribers around.

The Miz came out for Miz TV with Daniel Bryan and Bryan said he’d be back. Bryan called out Macho Mandow and Axel Mania came out. I thought they were already over and done. Miz got leg dropped and big booted.

The Lucha Dragons and the Ascension start off. Kidd and Cesaro and the Matadores were next. The Ascension pinned both the Matadors and the Lucha Dragons and it’s now down to them and Kidd and Cesaro with O’Neil and Young and the New Day still waiting to come in the ring. Biggest spot so far was Kalisto hanging off the top of the cage and falling onto no one.

The Ascension pinned two teams for just about nothing. The Prime Time Players pinned the Ascension. Cesaro did the Giant Spin on Kofi and Kidd drop kicked him. But Darren Young then rolled up Cesaro. Now it’s just New Day and the PTPers. The referees are allowing all three members of the New Day to be in the match.

This was a nice showcase for O’Neil who did some big power spots on Big E and basically carried Kofi, rammed him into the cage, and tossed him over the top. New Day won when Kofi gave Titus the Trouble In Paradise kick.

The match itself was oddly booked and they should never do a tag team version of this match again unless booked smartly. This wasn’t.

Nikki Bella Vs Naomi Vs Paige

They tried. Nikki missed a kick spot off the top rope, but it’s possible Paige got there too late. Nikki retained with the Rack Attack on Naomi.

Brie came out to celebrate with and hug her sister. Brie and Tamina were banned from ringside before the match.

Who let them do their WrestleMania match at Elimination Chamber? This match was excellent. The first half of the match was Owens getting the heat on Cena, but Cena never giving up and kicking out. Cena made his comeback and did four of the five moves of doom. The rest of the match was their version of WrestleMania. They were kicking out of each other’s big moves. The best spot was when Cena went for a superplex, but Owens reversed it and did a sweet vertical suplex from the top. Owens also hit a senton from the top rope. He finally finished Cena off with his powerbomb.

Owens cut a promo and said that Cena’s time is way up and his time is up. He said, “The champ is here!”

This match was longer than you’d think. Dallas beat on Neville for a lot of it and the fans were bored for the comeback. Neville won with the Red Arrow.

Triple H was in the back with Roman Reigns and Dean Ambrose. He told Reigns that he heard he wanted to be in Dean’s corner. He said that Kane would be there officially, but Reigns would just be a distraction. He said if Reigns gets involved, Ambrose will be disqualified. Reigns said he heard him loud and clear.

Ziggler and Barrett are starting off. Truth came in third. Barrett rammed Ziggler into Henry’s pod and it busted open. Henry came into the match. Soon thereafter, another pod opened and Ryback entered. Sheamus is the only one not in the ring.

King Barrett was the first one eliminated after Truth hit him with the Lie Detector. Sucks to be Barrett. The time was up again, but it was probably for Henry’s pod. Sheamus was dying to get into the ring. It was triple team Henry time. Ryback Shell Shocked R-Truth to get him out of there. Sheamus finally came in and he and Henry went at it. Henry ate a Brogue Kick and was pinned. The crowd is absolutely not into this match.

Ziggler was also Brogue Kicked. It was down to Sheamus and Ryback. Ryback went for the meat hook, but Sheamus rolled out. Sheamus gave him the White Noise on the outside which looked like it sucked. He also gave him a rolling senton on the outside. Ryback caught him and slammed him up against the cage and then dropped him in the ring for a powerbomb. He then gave him the Shell Shocked and won the match.

It was a bit of a surprise. It seemed like the match was being booked for Sheamus to win. Daniel Bryan was in the ring and handed him the belt. Ryback said Bryan is an inspiration to the people and to the Big Guy. Bryan did the Feed Me More chant, which I just realized is the polar opposite of the Yes chant.

They had a really good match with lots of near falls. It started slowly and the interference from J&J put the heat on Ambrose early. But he tried to stay one step ahead of Rollins.

Late in the match, Ambrose did the elbow drop on the standing Rollins and cradled him for a strong two count. Rollins kicked Ambrose and clotheslined him out and dove through the ropes on top of him. Rollins countered with a clothesline back in the ring. He then dove out on J&J and Kane.

Back in the ring, Ambrose went to the top, Seth pulled out the referee, and the ref bumped. Seth tried a 450 from the top, but Ambrose moved out of the way, hit the Dirty Deeds, and a second referee came into the ring to count the pinfall. Ambrose celebrated with the title. The original ref disqualified Rollins and Rollins keeps the title.

Interesting way to end this PPV, I guess.