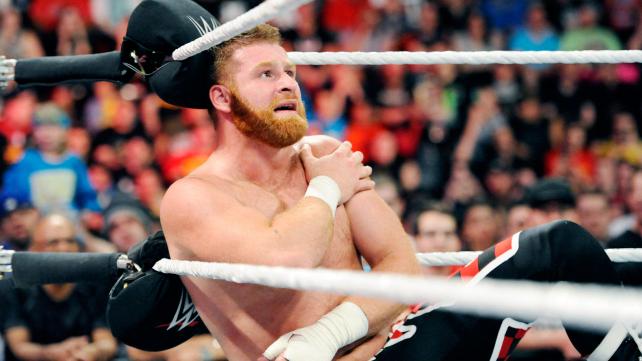 Sami Zayn “debuted” on Raw against John Cena and the main event for Payback was changed.

Raw was very wrestling heavy and it made for a pretty good show.

Okay, it wasn’t technically his debut. But the way it was presented reminded you a little bit of how John Cena was presented in his debut on Smackdown against Kurt Angle. Sami Zayn was trying to show some ruthless aggression, but unfortunately, was injured because of it.

If you look closely at the GIF, it seems that this is the spot in which he injured his shoulder. I don’t mean spot in the wrestling sense of the spot.

He toughed it out and had a halfway decent match, but the spectacle of it all was what people will remember.

Bret Hart came out to a great pop from the Montreal crowd. He was about to introduce Zayn. But then Heath Slater showed up, simply to be the guy who takes a shot from Hart, which again, received a huge pop. Zayn was introduced and the crowd was immediately hot.

After Cena won, he played it off well and gave that face of, “Man, that guy just gave me a tremendous match and I barely escaped by the skin of my teeth.”

I know that a lot of people think Zayn is going to be an incredible underdog babyface star. As far as natural charisma goes, he has more than Bryan, but essentially, they’ll play the same role. I think Bryan is a step ahead of Zayn as a wrestler and as someone who is believable, but we’ll see where Zayn goes. I just hope the man’s shoulder is okay and not a chronic injury.

Dean Ambrose is added to the Payback main event.

The show-long storyline featured Kane in his role of tough-love big brother and Seth Rollins as his sarcastic little brother who is better and more successful than he is. This played into the main event on Payback and they were featured in many segments.

Randy Orton opened up the show by mocking Roman Reigns before Reigns made it to the ring. According to Orton, Reigns comes up short and he’s the 12-time champ. Reigns reminded Orton that he beat him at SummerSlam.

The New Day showed up and talked a little about the Montreal Screwjob before cutting down Orton and saying that Reigns doesn’t only have his number, but has it on speed dial. This set up a handicap match between them and Orton and Reigns, which I was quite worried would be the death of the New Day. Fortunately, that was not the case. Reigns accidentally speared orton and Kofi Kingston pinned him.

Kane then said that Orton would face Reigns in the main event. Rollins sassed with him in the back and as show of power, Kane decided to have Rollins face Dean Ambrose, who he also faced on Smackdown. Rollins wasn’t happy, but Kane threatened a disadvantage if he continued to complain, so he left.

Kane added a stipulation to the match before it started. He said that if Ambrose won, the main event at Payback would be a four-way. Ambrose won what was the match of the night. J&J interfered, but Ambrose rolled him up anyway.

Ambrose was pissed, but Kane told him he could add more guys to the match to lessen his odds of retaining.

The main event was a schmozz and just a way for Ambrose to be the man standing at the end. Kane, Rollins, J&J and finally Ambrose all came down to ringside.

– Ryback and Bray Wyatt had a back and forth with Ryback in the ring and Wyatt backstage. It wasn’t a very good interview and the crowd drowned out Ryback. The match should be okay, but I’m dreading the build up.

– Lana was interviewed and then Fandango hit on her. Rusev was quite upset. And then he beat him like he stole something in their match afterward.

– Stardust pinned R-Truth after scaring him with spiders. Yep.

– New Day and Cesaro/Kidd had a back and forth backstage as the crowd chanted, “New Day sucks!” I really like the chemistry between the two teams.

– Nikki and Brie Bella came out and were jumped by Naomi and the returning Tamina. Naomi pushed the family angle since they may be related by cousins.

– King Barrett and Sheamus beat Neville and Dolph Ziggler after Barrett hit Neville with the Royal Bull Hammer. Barrett can be an excellent character if they book him well.

This was a quality wrestling show, but the final angle came off a bit flat. Still, this was better than most weeks.