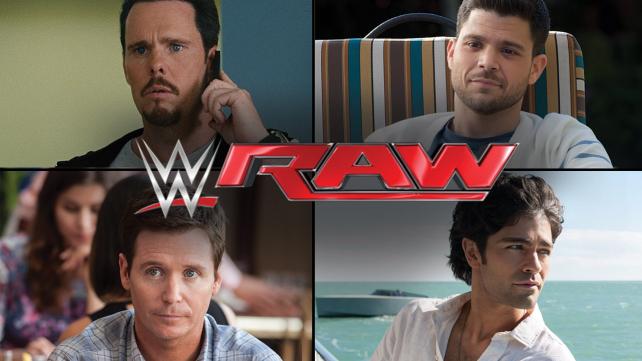 It was the go-home show for Elimination Chamber.

Thanks to DVR issues, I missed last week, but hopefully I won’t miss any shows in the future.

As we proceed, to give you what you need…

The show-long storyline was that the Authority and Seth Rollins weren’t so keen on Dean Ambrose being in the title match at this weekend’s PPV, I mean special network event. So they tried to do their best to make it hard for him, and hilarity ensued. Or, at least I think they wanted hilarity to ensue.

To start the show, the Authority was in the ring cutting a promo against Ambrose. Triple H said that Ambrose had to sign the contract in order to get the match this weekend, insinuating that they were going to make it very hard for him to not sign the contract. I know that this kind of booking is set up to be an entertaining way to fill three hours, but if you don’t want to give the guy the shot, just don’t give it to him. It’s not like Roger Goodell tells Tom Brady that he’s suspended next season, unless he can jump through a bunch of easy to jump through hoops.

Ambrose came out and cracked some jokes, including a Selena Gomez line that may have gone over most of the crowd’s heads in reference to Rollins as Justin Bieber. Roman Reigns eventually came out to try and even the score and Stephanie McMahon made a tag match between Reigns and Ambrose against Kane and Rollins.

Reigns is at an interesting point in his rise. I’ve always really liked him, but I think the fan reaction to him prior made his work suffer a bit. Not that he wasn’t good in the ring, but just that I don’t think he had the right demeanor. You could tell that he was a bit green when it came to dealing with the boos. But now? He has an edge to him. He probably should have more of an edge to him. But he seems to be smiling through it all now.

During the match, Ambrose had Kane pinned with the Dirty Deeds before Rollins broke it up. Ambrose eventually pinned Rollins with a backslide.

J&J security messed with Ambrose backstage and pretended like they had the contract for him to sign, but they didn’t. Ambrose slapped Jamie Noble and the fight was on. A cameraman was filming it and he got close to Ambrose and Ambrose punched him. He didn’t know who it was and was immediately regretful.

Triple H and Rollins were backstage with some cops and the cameraman who Ambrose punched out. The cameraman mentioned that he thinks he was pushed, but Ambrose did assault him. Ambrose was arrested. Stephanie later said that if Ambrose signed the contract by the end of the show, he’d get the match. Or else, Rollins would be off.

There was a YouTube video of another angle of the incident and it showed that the cameraman was actually pushed by Rollins.

Just as Triple H was about to say that Ambrose’s time was up, Roman Reigns’ music played and he came down to ringside and was immediately jumped. Ambrose showed up in a police van and he and Reigns cleaned house. Reigns grabbed the contract and instead of signing it himself, simply handed it to Ambrose to sign. He should’ve at least glanced at it or thought about it. What a nice guy he is.

The Entourage boys sans Ari Gold showed up and chatted with Steph and HHH. At least they referenced the old Summerfest line from a few years ago.

Turtle (or Jerry) talked to Steph about Ronda Rousey, which seemed to upset her and they pulled him away.

That Zack Ryder would take John Cena’s US Title Open Challenge! The idea was that since they were at Nassau, it was only right that the Long Island Broski wrestle. I’ve seen better ideas from the Entourage boys. This one was akin to when Drama decided to walk off the set with Dice Clay.

This was one of the lesser competitive matches and Cena finished him fairly quickly. Drama even got involved to help him, but to no avail.

After the match, Owens came out to beat Cena up again.

It’s a champion vs champion match, but it seems to also be non-title. With that stipulation, Owens should go over in a super competitive match. It’s the one I’m looking forward to most.

– Rusev quickly disposed of R-Truth, like he should. He then called out Lana to come out and said he didn’t pay enough attention to her and they need to be back together, but he did it in a very macho way to make it seem as if she’s just needy and he has to play her game. He also lost most of his accent. She bought it, until he told her that she just needs to utter those three little words – I was wrong. She didn’t like that very much and argued that Rusev did say the words, “I Quit” and to take the loss like a man. Rusev said some not-so-nice things about her and she stormed out and Dolph Ziggler was there to greet her with a kiss.

– Neville beat Stardust and was jumped by Bo Dallas.

– Sheamus beat Dolph Ziggler with a Brogue Kick after a Rusev distraction. Rusev then put Ziggler in the Accolade while Lana watched.

– Tamina beat Paige. So the only one not in the Divas title match gets the W.

– There was a weird segment where the New Day were upset because of having to defend the titles in the Chamber. Kane then decided to take all the challengers in the match and have them face the three New Day members. It immediately went to a DQ and Cesaro and Kidd did the Giant Swing into dropkick spot on Xavier Woods.

The show moved decently and was entertaining in spots. I thought the Entourage crew fit in perfectly and didn’t overstay their welcome. But outside of the John Cena and Kevin Owens match, I’m not sure anything is really hot.