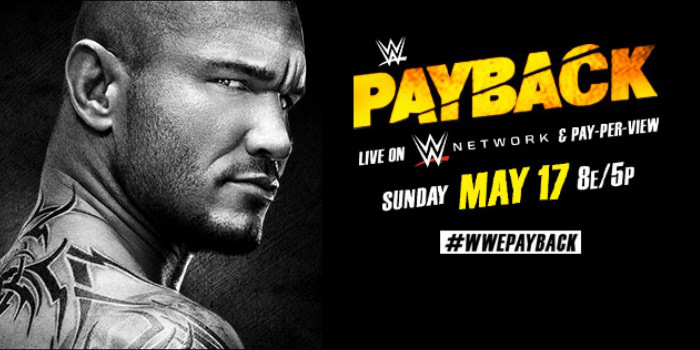 WWE Payback kicks off a nice next few weeks of WWE TV.

Payback is the first of what should be a fun next few weeks. Later this week is the NXT special and then in two weeks is the Elimination Chamber show, which is a WWE Network exclusive.

We’ll be back with live Payback coverage.

There were two pre-show matches. R-Truth beat Stardust in the first and the Ascension quickly disposed of the new Mega-Powers in the second match. What a waste that fun segment on Raw was.

The stipulation in the main event is that if Seth Rollins loses the title, Kane will be fired.

They started off fast and both guys had their working boots off. The problem I have with their matches is that Sheamus is as much of a strong style worker WWE has when Brock Lesnar is around and Ziggler’s selling is so comical.

Ziggler got Sheamus back for not kissing his ass at the last show.

Sheamus won with a Brogue kick while Ziggler was on his knees.

Kane told Rollins that he’s been trying to teach him how to be a great champion, but Rollins doesn’t get it. He said if he loses his strap, he might finally learn his lesson.

Cesaro got it started with a nice body slam on Big E. Big E pressed slammed him back for good measure. Cesaro had Kofi Kingston up for a vertical suplex, held him up, and then tagged in Kidd who dove off the top to help put him down. Cesaro then gave him the Giant swing into a dropkick by Kidd for the first fall.

We’re down to the last fall. Cesaro was throwing uppercuts like they were going out of style, including diving at Kofi with one that nearly killed him. He tried to get Big E up, but just dropped him down beforehand. He has to be tired. Cesaro gave Kofi a backbreaker and Kidd catapulted himself off the top rope into an elbow drop. Kidd had on the Sharpshooter, but Kofi kicked out. They had Kofi done, but Big E interfered. Woods came in the ring and small packaged Cesaro to win. They didn’t even need masks to pull off the Killer Bees finish.

That match was a whole lotta fun.

This match was actually halfway decent. Ryback even went to the top rope for a big splash. He’s not the agilist guy in the game.

Wyatt made Ryback hit himself on the top turnbuckle, in which the padding had been previously removed, and then gave him the Sister Abigail for the win. I want to like Wyatt so dearly and it just isn’t there yet.

So does Lana throw in the towel on Rusev? How else could this match end.

The requests from the referee to quit are already annoying. Rusev would simply leave Cena laying after a random, but not entirely huge move and the referee would ask him.

The ring steps were brought into the ring. Cena took a swinging uranage onto the steps and Rusev took an AA on the steps. He couldn’t breathe, let alone say he was going to quit. Cena picked up the steps and tossed them at Rusev who was outside, but he missed. He then threw Rusev into the ring post. Cena yelled at Rusev and said he was going to put him through the barricade and then shoulder blocked him through it. Rusev wouldn’t quit.

They were deep outside the ring and there was a table that held something for the sound equipment. Cena was going to AA him through the table, but it fell over. He then perched it up against the side of one of the sections. Cena then hit him with a MacBook. Rusev got the upper hand, but then they went toward the entrance. Cena gave him the AA where the pyro is and sparks flew. Lana looked terribly worried. Rusev said he wasn’t going to quit. Cena then hit him with the railing. He perched it up against the ring and then Rusev threw him through it and Cena bent the hell out of it.

Rusev put him in the Accolade, but Cena got to his feet and rammed Rusev back into the corner of the ring. He did it again, but Rusev didn’t let go. Cena fell back to his knees. The referee asked him and Cena didn’t say anything. Rusev let him go and thought the match was over. Rusev threw water on him to revive him so he could say that he quits. Rusev took off the top rope and was going to blast Cena with the turnbuckle, but Cena moved. He put Rusev in the STFU and was using the top rope to pull back on the move. Rusev wouldn’t quit, but Lana quit for him.

The New Day will have to defend their tag titles inside the chamber in two weeks.

The Bellas Vs Tamina and Naomi

The tag match was nothing. Naomi won by pinning Nikki.

Rusev was upset at Lana for having him lose the match. He told her to get out.

Well, we had our first real disappointment of the night. Neville was set for the Red Arrow and Barrett rolled out of the ring. Neville then dove over the top onto him. Neville went back into the ring, but Barrett stayed outside and lost via countout. He then attacked Neville after the match.

Neville came back into the ring and gave Barrett a German Suplex and then hit the Red Arrow for fun.

Kane came out first, so he’s at ringside. He interfered a couple times in the match.

The match started out a bit slow and it was mostly Orton and Rollins trading moves, but then the Shield got back together to put Orton through a announcer’s table with the triple powerbomb.

Rollins tried to celebrate, but Ambrose and Reigns started taking it to him. They put him on the other table and Reigns and Ambrose powerbombed Kane onto Rollins once, but the table didn’t break. They did it again and put him through it.

Ambrose and Reigns decided they’d go back into the ring and try to win the match. Reigns said loser would buy beers. They had a very good series together. Reigns hit the spear and Rollins interfered. Rollins and Orton were back in there together and Rollins pinned him with a pedigree.

Triple H came out and raised his hand. I guess Kane isn’t fired.