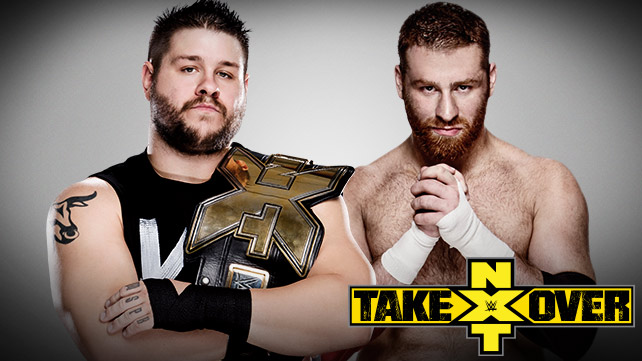 Check out the recap to the latest NXT Takeover show, Unstoppable.

Even though it’s been known that Hideo Itami has been hurt and would not wrestle on this show, NXT put together a video that was shown on Twitter and at the beginning of this show to explain the injury.

BREAKING NEWS: @HideoItami out of action tonight at #NXTTakeover: Unstoppable after attack in parking lot. http://t.co/wEEhqks6pE

It’s odd that NXT is the show with the “smart” fans and they have to kayfabe so hard here. I would’ve been fine with it if they did this several weeks ago, but it’s pretty hokey doing it here.

This is the number one contender’s match.

This was a good opener. Balor teased the double stomp from the top, but Breeze got out of dodge. Breeze had a surprise superkick and beauty shot for good two counts. They took it to the outside and Balor came off the top of the NXT screen on a dive.

Back in the ring, Balor finally hit the double stomp from the top to win the match.

Emma and Dana Brooke Vs Charlotte and Bayley

Emma has dark highlights in her hair to show how she’s now a heel.

Charlotte and Bayley were a good team early on. Bayley chopped Brooke right in the tits. After a couple weeks of trying to push her as the new athletic girl, Brooke did nothing in this match. They hid her throughout.

Emma had the heat on Bayley early on. Bayley made the hot tag and Emma tagged out at the same time. Charlotte beat up on both of them, putting the Figure 8 on Emma and then hitting her with the Natural Selection for the pinfall.

Charlotte and Bayley did the Flair strut after the match, though it looked more like the Double J strut.

That was a much longer match than I thought it’d be. The crowd was really on Corbin in a negative way, though it might be because they like Rhyno rather than hating Corbin.

After some back and forth, Corbin finally hit the End Of Days.

Enzo Amore and Colin Cassady Vs Blake and Murphy

When I was in San Jose, Enzo and Big Cass were tremendously over. Their pre-match stuff was over with this crowd, but I’m not sure the crowd cares all that much about them in the ring.

They worked a pretty smart match around Sasha targeting Becky’s arm, early on. She had her in an armbar and Lynch powerbombed her way out of it. Lynch was selling her arm well and then at times, just forgot to do so, and would then sell the arm again.

Lynch worked Sasha’s left arm and then did an exploder suplex with her arm behind her. Lynch sat back on Banks’ arm and Banks sold it tremendously well. I thought she was going to tap. But then again, people with one arm don’t then dive through the middle rope and onto the floor.

Banks eventually put her in the Bank Statement submission to win the match.

The fans loved it and they worked so hard. I think the match might’ve been better without both selling the arm because if anyone’s arm was truly injured, they couldn’t do a lot of the high spots they did. But it was definitely well-received.

The match was a huge brawl with much of it outside the ring. Zayn was able to do a few suplexes and big moves to Owens outside the ring, but the feeling was that at some point, Owens was going to be able to do the same to him and Zayn’s injuries would catch up to him. And that’s what happened.

Owens powerbombed him on the side of the ring and Zayn was out and couldn’t defend himself and the referees were trying to tend to Zayn, but Owens wouldn’t let them and continuously would beat on him. William Regal came out and pried Owens off Zayn, but Owens head-butted him in the mouth. He grabbed a chair and as he was about to hit Zayn (which he did, but softly) and then music played. Enter Samoa Joe.

Joe and Owens went nose to nose, but Owens backed away. Joe then got back in his face, but Owens walked outside the ring. He then thought about getting back in the ring, but had second thoughts. Pretty surreal.