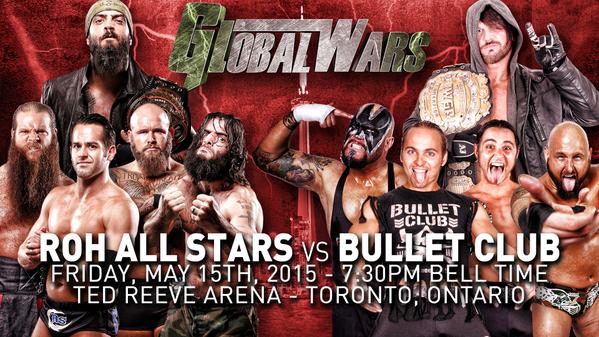 We have coverage of ROH and New Japan’s combined show, Global Wars Night 1.

Silas Young and Watanabe Vs Moose and Gedo

Moose tagged Gedo’s hand after a big drop kick on Young and Gedo sold the tag as if Moose was so strong that he hurt his hand. This is a clear showcase for Moose.

He stepped up on the second rope, jumped to the top rope, and fell back on a dive on both guys.

He won with a spear on Young.

Young put Watanabe out after the match.

This was all high spots and many of the spots were fun, like Kushida’s Nomo fastball punch. But the match was a bit of a turnoff to me. It would’ve been much better as a triple threat tag team match. There were too many things going on at once.

In the end, O’Reilly used a brain buster and armbar on Sabin, but Kushida broke it up with a moonsault and then tapped out Sabin.

The Kingdom Vs Matt Sydel and Jushin “Thunder” Liger

I love Maria. She does the valet gimmick better than anyone.

Maria interfered to set up the finish. Liger was caught up in Maria and all of her Maria-ness and was distracted after she rubbed his mask in her boobs. He walked into a superkick. Sydel came in like a house of fire and then got up on top to do a shooting star press, but was superkicked. That was scary, but well done. The Kingdom hit the spike piledriver for the win.

This was really good. Alexander hung with him pretty much move for move. Okada used the elbow drop from the top to try and set up the Rainmaker, but Alexander got out of dodge. But he didn’t the second time. Okada hit a great dropkick, then a Tombstone piledrive, which was the setup for the Rainmaker. I still have an issue with the Tombstone being the setup. Then he got the pin.

After the match, Okada tried to shake his hand, but Alexander left the ring.

Oddly, it was completely dark two different times during this match. Come on, ROH.

Roppongi Vice Vs The Addiction Vs BJ Whitmer and Adam Page

I thought the match was fairly boring for most of it. Maybe boring is the wrong word because the wrestling was solid. But nothing really happened.

However, the last few minutes was very good. Roppongi Vice did Stuff Omori driver on Page, which is an awesome move. Daniels broke it up before there was even a one count. He sent one of Vice into the corner so Kazarian could tag in and Kazarian stole the pin Page.

By the way, I thought this when I saw ROH during WrestleMania weekend, but Kazarian is one of the most underrated veterans going. You don’t hear a lot about his work, but it’s very solid.

There was an intermission and they started showing Kevin Steen vs Shinsuke Nakamura from last year’s War Of The Worlds, but it only lasted a few seconds. Then it came back and aired until the iPPV returned. The building from last year was much better lit than this show.

They started off the match with a dance contest which was fun.

I think most were pretty sure that Nakamura was winning this match and he finally did with the Bom A Ye knee. He was setting up for it and ACH kind of ran up his body with a drop kick like someone would run up a wall and flip over. But it only pushed Nakamura backward and he then hit the knee.

They didn’t do a whole lot in the match, but Nakamura sold for much of it.

This was a good match. Either this one or the Okada match is the best so far. Truth Martini wasn’t with Lethal as he and Bobby Fish were both held at the border. I guess that’s why O’Reilly’s match was changed.

They were pushing Lethal’s claim that he was the top champion in ROH all match long. Lethal did three dives between the top and middle rope to the outside early on. They traded a lot of big moves, with Lethal trying to set up the Lethal Injection all match long.

He finally hit it and got the pin.

This was another good match. I was wondering how Elgin’s style would work with Tanahashi and there were some quirky spots, but otherwise, they were fine together.

Tanahashi won after doing a number of high fly flows. He did one to the floor on a standing Elgin. Then, near the finish, he did one on Elgin’s back and immediately went to the top to hit another, but Elgin got his feet up. Elgin hit the buckle bomb, but Tanahashi hit the sling blade and then another high fly flow for the pinfall.

I bought this iPPV to see the New Japan guys who I don’t get to see as often as I’d like, but this was clearly the match of the night.

I’m not a spotfest guy for the most part, but when the crowd gets into it, anticipating moves and popping when they deliver, it’s so fun to watch.

At some point, all members of the Bullet Club did superkicks to Hanson who was in the corner. Matt, Nick, and AJ all did 450 splashes from the top rope onto Hanson. He kicked out, though there should’ve been a run-in as it was ridiculous for him to kick out.

Roderick Strong was superplexing everyone and then did one on to Nick on to the floor, where everyone caught him.

The finish was great. Jay hit the Jaydriller on Matt and then Mark hit the elbow from the top rope to win the match.

Jay and AJ were in the ring ready to congratulate each other as champs and Jay Lethal hit the ring to take both of them out, setting up the PPV match next month.