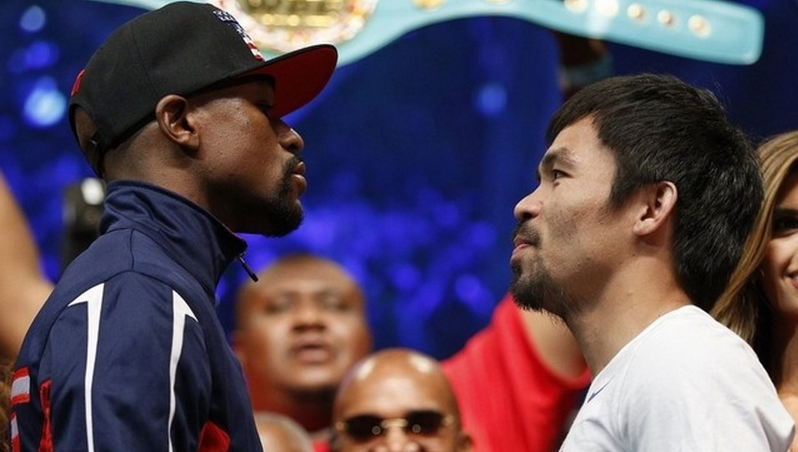 On the undercard, Vasyl Lomachenko knocked out Gamalier Rodriguez in the 9th round. And in the “semi-main”, Leo Santa Cruz beat Anthony Settoul by decision.

Uh oh. We might be in a delay here.

Update: HBO's Mark Taffet told @ChrisMannixSI that #MayPac could be delayed about 45 min due to pay-per-view issues http://t.co/a106MaV4Ct

Mayweather starts out jabbing, more just parrying it. He starts throwing more stiff ones, but doesn’t really land. Pacquiao hasn’t hit him yet, though he’s trying to throw the left hand. Best punch of the fight so far is a jab by Mayweather that Pacquiao dove right into. Mayweather landed a straight right and then a right hand to the chest. Pacquiao finally landed a jab. Manny had him in the corner, but Mayweather tied him up. Floyd wins the first.

Pacquiao was able to get Mayweather in the corner a bit and get inside. Once he does, Mayweather ties him up. Pacquiao is diving in and they’re getting tied up. Pacquiao probably landed the best punch of the round so I’ll give it to him. But Mayweather out-landed him so it was close.

Mayweather is trying to time the right hand and Pacquiao has walked into a couple of them. The pace for the third round is definitely for Mayweather. Manny is having a hard time sitting down on his punches and throwing because Floyd is out of distance so quickly. There was a little bit more of the rough stuff in that round. Manny smiles. Floyd glares. Floyd’s round.

This is Manny’s best round. He hit Mayweather pretty good with a left and it looked like Mayweather buckled a bit. He held his guard up, much like he did against Shane Mosley, so it probably did hurt him. Pacquiao couldn’t follow up and Floyd looked no worse for the wear. I have this fight even.

Pacquiao started the round out well and was surprising Mayweather with his jab, but Mayweather caught him with two nice right hands that put Pacquiao on the defensive and it completely stalled Manny’s momentum. I have Floyd up 3-2.

This is going to be a tough round to score. Pacquiao threw so many punches, but didn’t really land many. I think Pacquiao might win the round on the popular cards, but I’m unsure that he did any damage and it seemed like Mayweather actually out-landed him.

That was a better round for Mayweather and was throwing more jabs. Manny is still trying to throw the left, but Mayweather controlled the round and probably gets it. I have it 4-3 Mayweather. But there are several close rounds that could be up for grabs.

This was a fairly clear Mayweather round. He landed a straight right that Manny shook his head at and landed a check hook in the corner, but not nearly as clean as he did against Hatton. He also landed two strong punches that slowed Pacquiao. Pacquiao needs to simply throw more punches and flurries. That’s how he keeps Mayweather off-balanced. When he doesn’t throw punches in bunches, he lets Mayweather control the fight. I think it’s 5-3 Mayweather right now.

I’m starting to wonder if there’s something wrong with Mayweather’s right hand. He’s loading it and while he’s throwing it some, he’s not throwing it hard. I think he controlled the round again, but he’s fighting almost too defensively. Pacquiao is leaving him some open opportunities. I think Mayweather won that round as well.

This was a slow output round and I can see Manny winning this one. I’d more so score it a draw round. Neither guy took control of the round. I have it 6-3-1.

I’m surprised that Manny doesn’t seem to have much urgency. Then again, as he tries to dive in, he’s eating right hands. This was another Floyd round and strictly because of his great counter punching and movement. Manny’s going to have to land something big in the 12th.

Mayweather was throwing a half lead hook that landed a couple times. Pacquiao couldn’t catch him and didn’t even really hit him. I’d give Mayweather the round again and I have it 8-3-1. But there are at least three rounds that were close that could sway the cards.