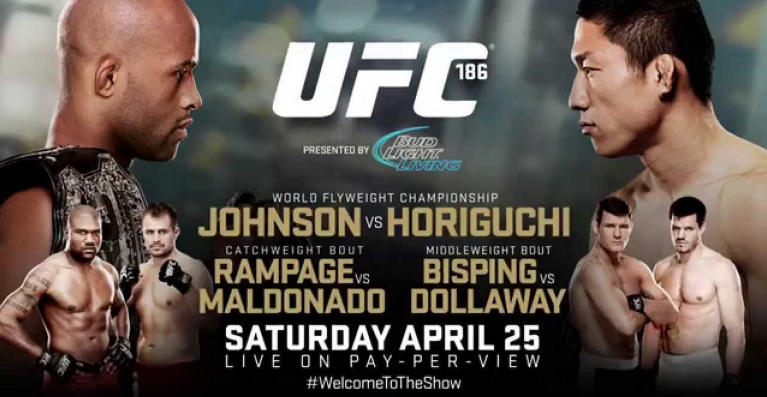 UFC is back at it this weekend with UFC 186.

After doing tremendous business in the first quarter of 2015, the UFC has to face the reality of another card that was hit with the injury bug. The card was originally going to have both Rory MacDonald and Hector Lombard on it, but Lombard failed a drug test and is suspended. MacDonald will instead receive a title shot at UFC 189 against Robbie Lawler. Also, Renan Barao was scheduled to get his rematch with TJ Dillashaw before Dillashaw had to pull out because of injury.

So what’s your main event? Well, it’s Demetrious Johnson defending his title Kyoji Horiguchi. I think this is going to be a fun fight, but Johnson is the worst drawing champion in the UFC, save for the new women’s title. And he also wants you to watch soap operas if you don’t want to watch him fight. I’ll watch the NBA Playoffs, Demetrious, but thanks.

Can Rampage Jackson save the day? If this was seven years ago, I’d say yes. There was just something special about watching Rampage fight. After being off the card and back on, Jackson should help, but this will probably be the least watch UFC PPV of the year.

(Jim forgot to put his picks in last week and had to take a mighty 0-4. I only put that in here in case you thought he picked Chris Camozzi to beat Jacare Souza. Ha!)

Alan: Michael Bisping by 2nd round TKO
This fight is a true battle of UFC veterans as 2006 TUF winner Michael Bisping takes on 2008 finalist C.B. Dolloway. After seeing Luke Rockhold walk through Lyota Machida in the same vein as he experienced, Bisping has probably taken comfort in the idea that he’s far from a shot fighter and still has plenty of gas in the tank. However he’ll need to beat Dolloway or else it will strongly appear otherwise. C.B. has been around the UFC lower-midcard for years, never really stringing enough wins together to move up the ranks to any great degree but at the same time getting enough wins to keep his spot. He’s the definition of a journeyman fighter, and he will provide a test for the Englishman. If Bisping is healthy and can produce the kind of striking that we’ve seen from him so often before, I think he lights up Dolloway and finishes this midway through the rounds. However if he’s still not right and still having issues due to his bad eye, then he may end up on his back getting pounded out by the former collegiate wrestling star. I’m gonna hang my hat on the first theory.

There has been a lot of fighting surrounding Quinton recently as the UFC and Bellator have had legal battles of the services of the 36 year old. With all that surrounding him, how prepared is he for this fight? It most assuredly will end up as a striking battle and I believe Fabio will win at the end. I am confident in the striking battle, but not so confident that Fabio will win.

Duan: Quinton Jackson by 2nd round TKO
This fight pretty much boils down to whether or not Rampage stopped training while the fight was hanging in limbo, and if so, for how long? A couple of days out of the gym I don’t see being a problem, but a couple of weeks could be. As long as Jackson is reasonably ring ready, he should still have enough to beat a guy of Maldonado’s level. The new catchweight for the bout is a definite red flag, but it could also just be an indicator that Rampage stopped cutting weight, rather than a sign of him having ditched training altogether. If that’s the case, the higher weight might even work to his advantage. If Maldonado has been dieting down to hit the light heavyweight limit and Jackson comes in huge, this will be two guys from different weight classes fighting. I wager that Jackson is in sufficient condition to go two rounds if needs be and that will be enough. Once they start to trade, the power will be with Rampage. That size difference will be felt in the weight of their punches.

GG: Kyoji Horiguchi
On most levels, this prediction makes absolutely no sense. The only thing that will make any sort of sense is that I believe Johnson will eventually lose and if that’s the case, why not to Horiguchi? Johnson’s beaten everyone and all of the guys he’s beaten recently all have more experience in the octagon than Horiguchi does. But he hasn’t faced a striker at Horiguchi’s level of late. He’s beaten wrestlers, though not one dimensional wrestlers, and I think the change of pace might be the one thing that gives Mighty Mouse trouble. It’s quite possible that even that won’t give him trouble, but I’m betting on the upset and hey, he’s got to lose sometime.