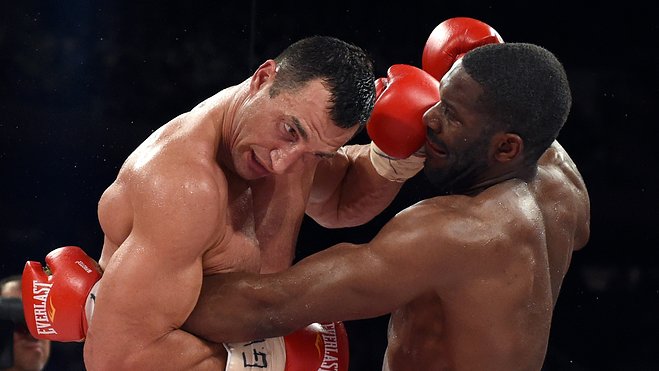 Wladimir Klitschko and Jon Jones lead our Top Five, but for quite different reasons.

Can't wait for #CheapPops to begin. Thanks for the support – I'm told it will be on #WWENetwork very soon! pic.twitter.com/zkbr6HMLOx

– Chris Jericho is set to interview Stephanie McMahon on Thursday, also, for the WWE Network.

– And in more WWE Network news, the King Of The Ring is back with the first round airing on Raw later today and the semi-finals and finals on Tuesday on the WWE Network.

– Are you Tough Enough?

– ROH has some amazing lineups coming up for their shows with New Japan. Check out all the lineups on ROHWrestling.com. That iPPV better not go down.

– Ron Wright passed away. You can read a bio in the latest issue of the Wrestling Observer (subscription).

– Check out this Rick Rubin piece with the Rolling Stone where he talks about Smokey Mountain Wrestling.

– The new season of the Ultimate Fighter started with two warring fight camps.

– The UFC makes some changes in how they will pay fighters through their Reebok deal.

– I can watch Manny Pacquiao commercials all day long.

– Andre Ward faces Paul Smith on June 20. It will be shown on BET and streamed through Jay Z’s streaming music service, Tidal.

– Floyd Sr. blasts Alex Ariza. Does anyone like Ariza?

– It was getting dicey there for a bit, but Mayweather vs Pacquiao tickets finally went on sale.

– HBO’s “At Last” was a fairly good documentary on the making of Mayweather vs Pacquaio.

Look at Dana spoiling all the fun.

4. Demetrious Johnson does it again.

Demetrious Johnson defended his title in rare fashion, scoring a submission victory over Kyoji Horiguchi with just one second left in the fight.

The show will more than likely be the lowest bought PPV of the year. According to people there, much of the crowd started leaving during the fight, which isn’t good for Johnson or his title. It sounds like he’ll fight John Dodson next in a rematch of their fight from a couple of years ago.

3. Extreme Rules is a fun show, but Daniel Bryan was scratched.

Seth Rollins beat Randy Orton in the main event of Extreme Rules after predictable interference from Kane. The Big Show took tons of bumps in losing to Roman Reigns. Reigns should be very thankful for Show’s performance. John Cena beat Rusev in a terrible chain match. The chain stipulation should’ve never been booked.

The best match was the New Day beating Tyson Kidd and Cesaro for the tag straps.

But the biggest story of the night to me is that Daniel Bryan was scratched from the show after being advertised for it all the way through Saturday. Before the show on Sunday, WWE.com posted that Bryan wasn’t cleared by the doctor and wouldn’t wrestle on the show. During the preshow, his opponent, Bad News Barrett faced and lost to Neville as a makeup.

This is the second year in a row, and not too far off from the same time frame, that Bryan had to miss a show because of an injury. Let’s hope that this injury isn’t as serious as his last one, which caused him to miss the rest of 2014.

This would absolutely be the number one story in our Top Five if there were more details. But this is all we have at this moment.

Jon Jones is a suspect in a hit and run case in which a 20 year old pregnant woman was injured. TMZ covered it.

There’s no word yet on his fight with Anthony Johnson at UFC 187.

Wladimir Klitschko beat Bryant Jennings in his first fight back in the US in quite some time.

Jennings pushed Klitschko at times, making him a little uncomfortable in the process, but Klitschko was simply too skilled.

Klitschko said he believes his next fight will be against Tyson Fury, though fans are clamoring for a fight with Deontay Wilder. I’m sure that fight will be quite hard to make.