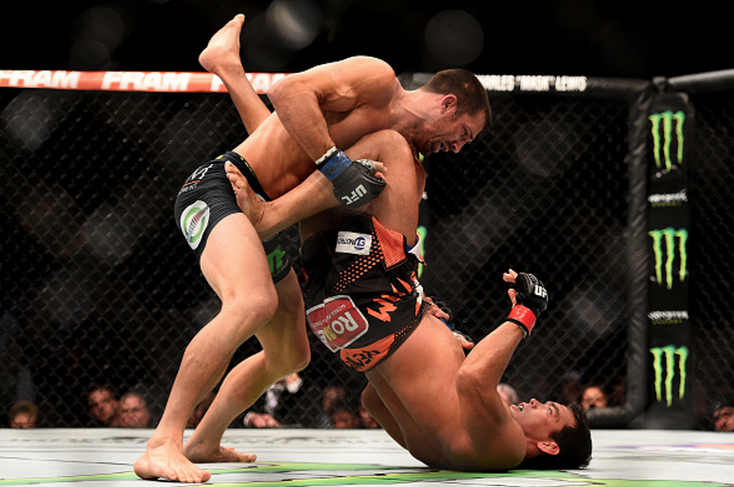 Saturday night was a huge night in combat sports. Where does everything fall in the top 5?

Before we take a look at the stories that just missed the top five, I wanted to shoutout the first podcast that Duan and I did in our Fabulous Four series one more time. We’ll record the second, which deals with the “No Mas” fight soon and it will be up for listening in early May.

Okay, just one more shoutout. Check out the ongoing Greatest Wrestler Ever project that Alan’s doing.

And now, onto the non-top five stories:

– Mick Foley is bringing his stand-up act to the WWE Network. Later this week, Foley will tape the show at Full Sail and Jim Ross and JBL will join him.

– Jey Uso will be out for most of the rest of the year. This sucks as I was hoping for more Usos vs Cesaro and Kidd matches.

Like to thank TNA Wrestling for the opportunity to apply my craft for past several years. Best wishes to them in the future.

He discusses the situation on the latest episode of his podcast.

– Jim Ross is doing his live show in New York the day before SummerSlam.

– WWE announced that they signed 11 new names to developmental.

– Our friend @HeidiFang wrote about Phil Davis signing with Bellator.

– Ariel Helwani reported that TJ Dillashaw vs Renan Barao II has been rebooked for July.

– Showtime’s Inside Mayweather/Pacquiao is up. HBO’s At Last documentary isn’t yet online, but Duan said it’s the better of the two.

– We celebrated the 30th anniversary of Hagler-Hearns.

– In a fight that I don’t think too many people are excited about, Amir Khan faces Chris Algieri on Spike TV in May.

5. The Briscoes are staying in ROH.

Over WrestleMania weekend, one of the conversations going around was that the Briscoes were headed to WWE. The way the talk was, it was just about a formality. But something changed. I’m not sure that it was mostly because of an old slur Jay Briscoe made a few years ago, like this article suggests.

It seems that while WWE was their goal, they have too many things going on to uproot their families to Orlando and NXT based on the salary they would’ve made there. ROH beat WWE’s offer and they’ll be around for a couple more years.

This one is a bit fishy so far. WWE pulled Bryan from the European tour early and claimed it was because of a concussion at the hands of Sheamus from a Smackdown match a couple of weeks ago. If that was the case, the diagnosis must’ve come very late as I don’t think they would’ve allowed him to go on the tour if that was the case.

According to Dave Meltzer in the latest issue of the Wrestling Observer, Bryan was wrestling sparingly of late and being protected in tag matches.

How they handle him for this week’s television will be interesting.

It looked like things were all set for the Kovalev vs Stevenson match-up that we were all looking forward to, but something happened on the way to Albuquerque.

According to Dan Rafael, it’s a power struggle of promotors and networks. Because Kovalev only fights on HBO, Kathy Duva pulled out of the purse bid, figuring she was going to lose the bid.

We want to make the fight very much and we’d love to make the fight with them on a 50-50 deal,” Duva told ESPN.com. “But Sergey is contractually tied to HBO and we can’t go to a purse bid. We can’t fight the fight if we lose the bid, so there’s no point in going to the bid and putting on charade.”

Stevenson is with Al Haymon and all of his networks, of which HBO is not a part of.

So once again, the fight will not happen, at least right now.

2. Boxing was all over Saturday night cable TV.

HBO and Showtime both had cards on Saturday. HBO showcased Terence Crawford and then in the main event, Lucas Matthysse vs Ruslan Provodnikov. Showtime countered with Julio Cesar Chavez, Jr. a ratings machine against Andrzej Fonfara.

Jeremy Wall had a nice recap.

Crawford won his fight over Thomas Dulorme by TKO, setting him for some big fights at 140. Matthysse outpointed Provodnikov in a rugged battle.

As for JCC Jr? Well, things didn’t go so well for him.

I’d expect HBO to win the night ratings-wise, because they usually do, but it will be interesting to see if Chavez was able to make it a close night.

The UFC held their second of three straight weekend shows and this one was on Fox. The show lost their semi-main event when Yoel Romero pulled out of the fight, but overall, the card looked like a good action one. It was slightly lacking in star power, but according to the early ratings, it did better than last year’s April show on Fox which featured Fabrico Werdum and Travis Browne in the main event.

Paige VanZant beat Felice Herrig in her coming out party.

Max Holloway upset Cub Swanson in impressive fashion. And like just about everyone expected, Jacare had little trouble with Chris Camozzi.

In the main event, Luke Rockhold manhandled Lyoto Machida like only a couple guys had ever done before. It more than likely sets him up for the next middleweight title fight against the Chris Weidman and Vitor Belfort winner. Rockhold said he wanted the fight to happen in New York at Madison Square Garden.