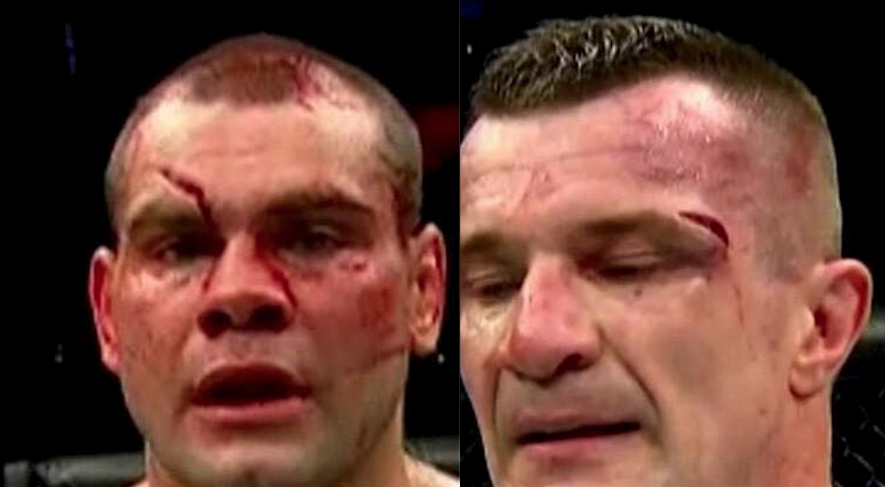 There weren’t any terribly big shows this week, but there was still some good stuff for the Top Five.

Before we get started, I wanted to let everyone reading this know that Duan and I are starting a new podcast project called The Fabulous Four (or The Fab Four) where we discuss all the fights between Sugar Ray Leonard, Tommy Hearns, Roberto Duran, and Marvin Hagler in order and in heavy detail.

The shows will come out monthly and the first episode will be out on Monday.

Before we get to the top five, here are some of the stories that didn’t quite make it.

– Nate Diaz and Matt Brown look to be set for UFC 189, but Diaz later says to pump the brakes as he’s fighting Anthony Pettis.

– Sylvester Stallone posted a photo from the Rocky spin-off, Creed.

Get ready to go for it!

– This Scott Steiner and Hulk Hogan story is silly.

– Jim Ross was in discussions with Lucha Underground to call some shows.

– My takeaways from Chris Jericho’s televised podcast with John Cena.

– A year ago, the Ultimate Warrior cut his final promo.

And now, let’s get to the top five.

5. Smackdown is headed for the USA Network.

Even though in the past, they said they didn’t want to be known as the wrestling network, the USA Network will start broadcasting WWE Smackdown in 2016. The show has bounced around over the years and has recently moved nights back to their original Thursday night. There’s not a lot of information out there yet as to where they’ll fit it in the schedule. I’m personally hoping for a live show on Thursday.

USA also announced a June 23rd start date for the newest season of Tough Enough. There are supposed to be live segments of the show.

The bigger question is who is hosting the thing. With Steve Austin unable to do so because of prior reality show commitments, could it be Chris Jericho who also replaced him on the live podcast?

Jericho would seem to have a great feel for it because of how he started. And for kicks, I’d bring in Lance Storm to help, since Storm’s been running his own school since he left WWE.

The UFC hired Jeff Novitzky, as the Vice President of Athlete Health and Performance. His role is expected to be one that helps them rid the sport of performance enhancing drugs.

Novitsky is most famous for uncovering evidence which implicated major big-time athletes in using PEDs and lying about it.

What the hire does is show how serious the UFC is about the PED issue. I don’t believe Novitsky would be involved unless they were super serious about the problem.

First, Bellator won an injunction in the New Jersey courts, preventing Rampage Jackson from fighting in two weeks at UFC 186. It hurts a card that lost the main event between TJ Dillashaw vs Renan Barao. Rampage would’ve been the biggest name to casual fans and it would be his UFC comeback fight.

Steve Bosse will replace him against Fabio Maldonado.

The UFC also lost a main match from next weekend’s UFC on Fox show. Jacare Souza was scheduled to face Yoel Romero in a fight that was originally supposed to happen in February. Souza fell ill and it was rescheduled for the UFC on Fox show. But earlier in the week, Romero pulled out due to a knee injury.

And in Romero’s place?

Chris Camozzi steps up to replace Yoel Romero. Will face Jacare Souza next Saturday at UFC on FOX 15.

2. PBC On NBC had an interesting night.

I personally thought Premier Boxing Champions had a pretty solid debut on NBC in March. You saw budding superstar Keith Thurman handle a very game Robert Guerrero in a really good action fight. They’ve since then held cards on Spike TV and CBS, but their second biggest card since their debut would be on NBC once again.

Danny Garcia faced Lamont Peterson in the main event on Saturday night. It wasn’t necessarily a good fight, but there were good exchanges. Peterson stayed away from Garcia for the early rounds, not allowing Garcia to cut off the ring at all. But then he started standing toe to toe with him, doing so in impressive fashion. It woke Garcia up and he started to look more like himself late in the fight. Personally, I thought the fight was a draw, but Garcia would win a majority decision.

The semi-main between Andy Lee and Peter Quillin was actually called a draw because one judge failed to give Quillin a 10-8 round in one that he knocked Lee down. Lee claimed that he went down because Quillin stepped on his foot, but two judges scored it a 10-8. The 10-9 round to Quillin was all the difference and instead of winning a majority decision, it was declared a split draw.

It took Cro Cop nearly eight years, but he finally got Gabriel Gonzaga back for spoiling a huge money fight between he and Randy Couture in 2007. Couture was, at the time, the heavyweight champion after beating Tim Sylvia as a big underdog. Cro Cop joined the UFC early in 2007 and was given two fights before he was probably going to face Couture.

In his first UFC fight, he beat Eddie Sanchez, which set up the bout with Gonzaga. Gonzaga subsequently knocked him out with his own move, a head kick. Cro Cop was never the big star intended in the UFC, though he had a fairly long UFC career, going 4-6 from 2007 through 2011.

But he’s now back in the UFC after a four years away from the company. At Saturday’s Fight Pass card, Cro Cop beat Gonzaga after losing the first two rounds. He caught Gonzaga with elbows in the clinch, put him down, and finished him once they got there.

Neither guy looked great, but for the moment, Cro Cop was back.