The first round of the King of the Ring tournament was held on Raw.

The post-Extreme Rules Raw was fine, with most interested in the mysterious King Of The Ring tournament.

(By the way, I apologize for not doing the rerun last week. DVR problems aren’t fun.)

The King of the Ring begins. 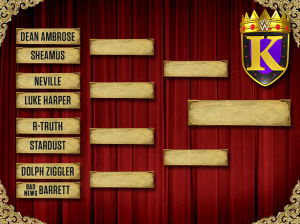 So what is this mysterious King of the Ring tournament? We were only given a glimpse at the WWE Network commercial for Extreme Rules. On Monday, WWE.com released the brackets.

The first round was held on Raw with the semi-finals and finals to be held on a live Network special on Tuesday.

In those first round matches…

So we have Barrett vs Truth and Sheamus vs Neville in the semis later today on the WWE Network.

The show long story was a lead up to who Seth Rollins is facing next at Payback. He was either going to face Randy Orton or Roman Reigns at the PPV. Kane and Rollins were feuding with with each other, with Rollins calling Kane the Crypt Keeper and Kane calling Rollins the Justin Bieber of the WWE.

Kane said he’d let the WWE Universe decide who Rollins would face, but Rollins was upset, so Kane made a third option, which was a three-way. The three-way won by the way.

In the tag team match, Kane turned on Rollins, threw him into the ring and he ate a Superman punch and an RKO before he was pinned by Randy Orton.

– Ryback disposed of Bo Dallas, but Bray Wyatt jumped him and gave Ryback the Sister Abigail.

– John Cena was ready for his open challenge. He told Rusev that if Rusev beat him in their I Quit match at Payback, he wouldn’t ask for a rematch. Heath Slater came out for the challenge, but Rusev jumped Slater before it started.

– Adam Rose beat Fandango after Rosa Mendes came out in one of the costumes and distracted him. She then told Fandango that he chose the fans over her and started making out with Rose.

– Renee Young interviewed Brie Bella, who had to face Naomi later, about Daniel Bryan. She talked about Bryan being so beloved and that he loved his fans back. Naomi slammed Brie to the ground and said no one cares about her husband or her. In their match, Naomi beat her with an inside cradle. Brie’s getting less athletic by the week.

– Damien Sandow came out to give a little history of his WWE career when it came to his gimmicks. Curtis Axel came out and Sandow did this annoying thing where he’d mimic everything Axel said. I had to fast forward before I threw my remote at the TV.

The show was decent with the King Of The Ring matches and though I’m not sure what they can do with Kane, the Kane and Rollins dynamic is really good.