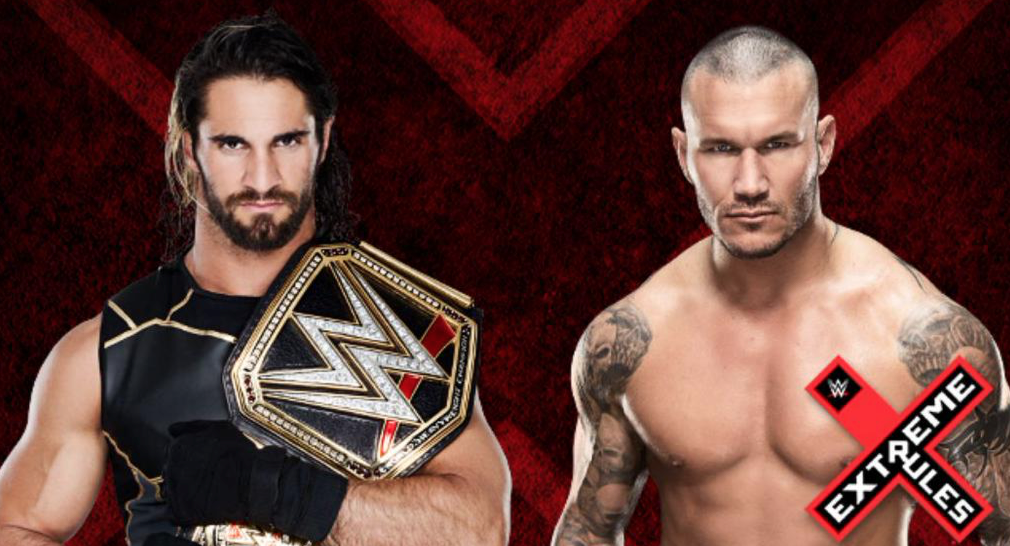 Now that WrestleMania is over, it’s time to move toward Extreme Rules.

There was a bit of a sense of apathy since WrestleMania season is over, so they kept Triple H and Stephanie off the show, gave us a super-sized dose of Seth Rollins, and continued to over-inundate us with Kane and the Big Show.

Randy Orton is the number one contender.

Randy Orton’s strength as a babyface has never been to cut long promos, but so far, WWE has decided that this is exactly what their babyface’s do. Thankfully, he hasn’t had to carry one so far and it’s mostly been in response to the dastardly Seth Rollins.

Seth, the Big Show, and Kane with J&J came out to start the show. The angle seems to be that Seth is bothered by Kane so I guess Kane is going babyface soon. Orton came out to say that he should be the number one contender since he beat Seth at WrestleMania. Kane cuts him off and says the main event is Orton vs Ryback vs Roman Reigns for the number one contender’s spot and they also were in single’s competition before the three-way.

(By the way, if Kane was really pissed at Orton, he should’ve made Orton wrestle a few times right?)

In the main event, Orton won after giving Ryback the RKO after he fought off J&J. They continue to book Reigns incorrectly. It’s very easy to give him a bit of sympathy after what happened at WrestleMania. But eh, let’s continue to book him the same as we did when he became super unpopular.

The Authority beat up everyone, Orton included, after the match.

I think there was a way to handle this match and to elevate Neville in the best way. One way to do that would be to have a competitive and fun match. They did that. But the second way would be to do that and also have a finish that’s either not clean, or one of desperation. Seth Rollins didn’t have to curb stomp Neville to win the match. He could’ve put his knees up on Neville’s finisher and quickly school boyed him.

Some may say that Rollins as the champ needed to be strong and win convincingly. But I don’t think so. Everyone knows he’s excellent in the role. And, he’s a heel.

I usually give the three major plotlines as the headers, but this show wasn’t all that newsworthy, so it only gets two.

– Byron Saxton shouted out AJ Lee and they showed her tweet on the air.

Break the rules. Be a fighter. Any dream is possible if you are brave enough to do it YOUR way. Thank you all. pic.twitter.com/qu7bBOMFdu

– For some reason, Brad Maddox is back.

– You’ll never guess who answered John Cena’s open challenge. It was none other than Stardust! They had a fun match which seemed to be there to show A) that Cena can wrestle and B) to show that he’s the veteran who can help give the young guy some shine. It’s kind of a weird spot for him because that’s Triple H’s and Ric Flair’s old spot.

– Paige and Naomi beat the Bellas.

– The Lucha Dragons beat the New Day. Interestingly, Sin Cara won the match. I thought they’d simply use the Dragons to showcase Kalisto, but on this night, it was Sin Cara winning with the senton.

– The Divas flirt with Kane and he books a number one contender’s battle royal for next week.

– Sheamus beats Mark Henry convincingly. I really like Sheamus’ new character. The haircut is a plus because it’s so ridiculous it makes him immediately hateable. And he’s all about size, which makes him a better heel. He’s always been a better heel than a babyface.

Raw was fine, but it wasn’t one of those shows that you need to go out of your way to see. You have a number one contender for Seth Rollins, though they need to heat up that match a bit if it’s the main event. Not surprisingly, they continue to book Reigns incorrectly when it seems like it’d be so easy to get him some sympathy. Also, neither Daniel Bryan or Dolph Ziggler were on the show which meant the wrestling wasn’t all that strong this week. At least we got some Neville.