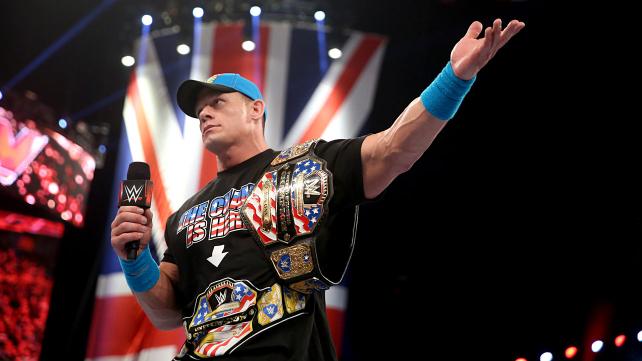 Raw was taped, emanating from London. Usually, it means there will be a great crowd, but also, with two weeks until Extreme Rules, it was a possibility this was going to be a treadmill show. And yes, that’s pretty much what it was.

I might be a overstating it a bit, but I feel like the US title has rejuvenated John Cena a bit. Ever since he won the US title, he’s faced Dean Ambrose, Goldust, and now Wade Barrett and has had above average matches each time. He’s now in the spot on the show where you know you’re going to get a really solid and fun match.

But also, even in beating the guys he’s facing, he’s showing that you don’t have to bury a guy in beating him. I thought all three men he beat didn’t lose a beat, even in losing. Not to say that this is John Cena’s best work ever, because it’s not, but for the people who don’t think he’s any good, get over yourselves.

@mitsuhiroaka sorry my screaming is horrible but I recorded john cena when he came out and I was hyper pic.twitter.com/ITm1XsWHX1

The stipulations are set for Seth Rollins Vs Randy Orton.

The show-long storyline had to do with the main event at Extreme Rules. The way they handled the stipulation was awkward. What was supposed to happen is that whoever won their match would get to pick the stipulation. However, what wasn’t answered is what would happen if both won or both lost.

Orton faced Cesaro and beat him by disqualification, but the match was restarted and made a handicap match as Tyson Kidd was added. He won that match too after hitting the RKO on Kidd after a springboard into a RKO.

Rollins was scheduled to face Dolph Ziggler. Instead, he wanted to face Jamie Knoble so Knoble could lay down for him. Knoble suggested Kane. Kane didn’t seem too keen on the idea. Big Show tried to talk Kane into laying down to stay on the good side of the Authority. Daniel Bryan was disappointed in Kane for even thinking about.

During the match, Kane was about to lay down, but he kicked out. Rollins screamed at Kane to think about his future. Kane hit a chokeslam, but the laid Rollins on top of him so Rollins could still win. What does this mean for Kane? Hopefully not much, unless they want to put Kane and Bryan back together again.

During the main event segment, which was the announcement of the stipulations, Rollins said that Orton couldn’t use the RKO and Orton said it would have to be a cage match, seemingly to keep the Authority out of the match, which also means Orton hasn’t seen a cage match in quite a while.

– After nearly being killed by Brock Lesnar, Michael Cole was back!

– After Cena beat Barrett, Rusev jumped him and left him laying.

– Triple H will make an announcement on Tough Enough next week.

– Paige won the battle royal to face Nikki at Extreme Rules. The match was maybe two minutes long. She dumped out Naomi and then cut a babyface promo in front of the hometown crowd. Naomi then jumped her and beat her up.

– Bray Wyatt is the new face of fear.

– The Lucha Dragons beat the Ascension. The Ascension wishes this was still NXT.

– Roman Reigns did an interview with Booker T which referenced him going to Suplex City. He cut down the Big Show which probably means that they’re going to face each other at Extreme Rules. Show showed up on the big screen and cut down Reigns. As Reigns was walking down the aisle, Show jumped him, choke-slammed him on a car, and left him laying.

– Stardust beat Fandango. After the match, Fandango dumped Rosa Mendes and got over with the crowd.

– Mizdow got his win back against Miz. It’s a shame they wasted two short TV matches rather than building a bigger match at the PPV.

– Ziggler, who was earlier supposed to face Rollins, faced Neville and beat him with a Zig Zag. Sheamus beat up both of them. Neville is now slotted.

Seems like they’re setting up whatever big they have for next week, unless they don’t have anything big.