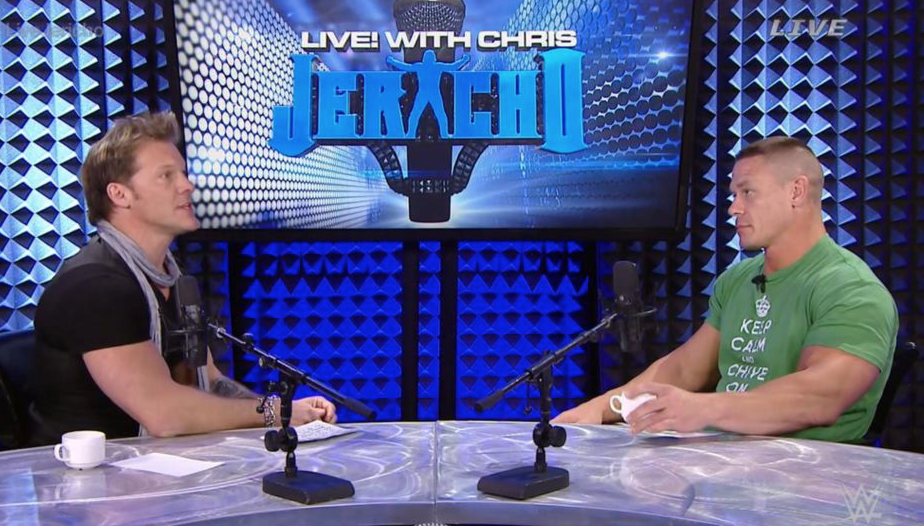 Chris Jericho wasn’t Walter Cronkite, but you shouldn’t have expected him to be. I have some takeaways from his interview with John Cena.

I thought Chris Jericho was very personable and he out and out said to expect the interview with John Cena to be more like a late night interview than anything else. Some of the WWE universe may have wanted a few more “inside” questions asked, but I found the interview to be entertaining. John Cena wasn’t too robotic and Jericho seemed very at ease.

(By the way, Steve Austin said that he and WWE simply didn’t come to a deal with the Network podcasts and that’s why he’s not doing them. He didn’t say that there was any heat between he and WWE for any of his questions.)

Here’s what I thought were the three main takeaways from what Cena said:

Cena put over OVW big time, even mentioning Jim Cornette by name. A graphic was put up with he, Brock Lesnar, Randy Orton, and Batista next to each other from their OVW days and Cena talked about each guy. He also mentioned Shelton Benjamin and then guys who didn’t make it like Sylvester Terkay.

He didn’t say anything groundbreaking, but it’s nice to see something said about where the previous stars were made.

I wish Chris Jericho didn’t even go there because it’s a no-win question. People want it asked but aren’t going to be happy with the answer unless John Cena admits to taking steroids. And he’s not going to admit it.

Jericho showed a photo from Cena’s body building days and even used one of Vince McMahon’s favorite terms, describing how vascular he looked. Cena tried to downplay it a bit. When Jericho asked him about coming back from injury so soon, Cena said it’s all about the rehab.

Cena’s argument has been that he’s the same size and has weighed the same for many years.

I find it hard to believe that Cena’s never used steroids, but he is never going to say that he’s done so while he’s an active performer. His reputation is far too important to the company as a “good guy” and make a wish contributor.

The Rock and possibly turning heel

Cena talked about his angle with the Rock and how originally, they didn’t like each other because of how Cena went at Rock in the media to get him to come back, hitting at Rock’s loyalties to the company. What he failed to mention is that the reason Rock was away had more to do with Vince McMahon letting his contract run out than anything else.

He talked about how the Rock came at him so aggressively on the mic and simply wanted a chance to match him. He now has utmost respect for him and called his match with Rock at WrestleMania 28 one of his more memorable matches.

He did say that there was talk about him going heel in the program with Rock and before anything was made official, he already had ideas for new theme music and new gear.