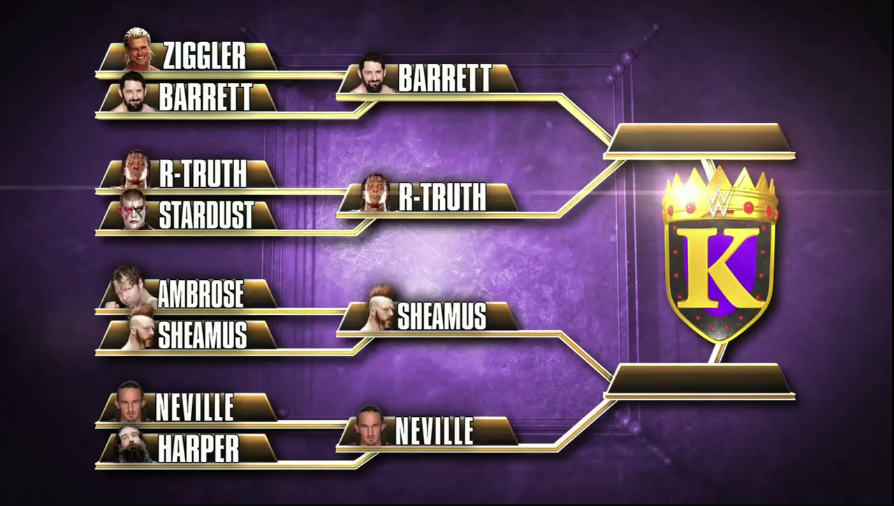 After WWE mysteriously teased King Of The Ring at Extreme Rules, it left people wondering what was going on with an old favorite event.

Last night on Raw, the quarterfinals were held with Wade Barrett, R-Truth, Sheamus, and Neville advancing to tonight’s live WWE Network special. The show is only scheduled for one hour, so we might only get the semifinals and finals and that matches won’t be very long.

I asked the FGB crew who their pick was to win the tournament.

Wade Barrett: It looks like a near certainty they’re going with a Barrett/Neville rematch in the final. WWE will almost always choose the face vs heel dynamic where possible, and for that, Neville and Barrett are their best possible options. Sheamus, as a past winner, is out of the running, and it’s way too late in the day for a major singles push for Truth. Neville is the only guy in the lineup that a win would be a real difference maker for; he would be the logical pick and my choice everytime. Trouble is WWE rarely has time for logic. They will give Barrett his win back because that’s just what they do whenever a fresh talent scores a big upset.

Wade Barrett: Barrett seems like the obvious winner and the brackets haven’t done much to disguise that. I thought Neville vs Barrett was a fantastic match on Sunday and I’m excited to see if they top it tonight.

Wade Barrett: I say Barrett wins, probably beating Neville in the final in a competitive match. I think KING BARRETT fits perfectly AND he is already British. So my pick is Wade. I hope it means they’ll give him a program with Cena, post-Rusev.

Neville: I’m going out on a limb here and choosing Neville, though I think King Barrett would be an amazing gimmick for him.

Like Duan says, Neville winning could be a real shot in the arm for him. Even though he’s been a spectacular addition to the main roster, he’s already slotted as a mid-carder; albeit a super exciting one. I also think that Barrett is scheduled to do a movie soon, so he may be off TV. I do think they should have a struggle for the crown as a feud.