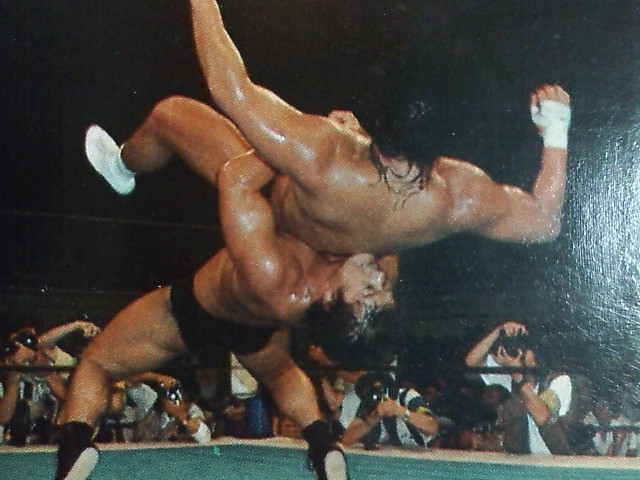 Alan updates everyone on where he’s at with the “Greatest Wrestler Ever” project.

It’s been three months since I began the “focused” Greatest Wrestler Ever research, and in that time the biggest realisation I’ve come away with (by far) is that I could have set a deadline of 2025 for this and I’d still have barely scratched the surface of all the incredible wrestling that’s out there just waiting to be consumed.

I’ve been watching a ton of stuff since I last blogged, but there are still so many wrestlers, so many eras and so many styles that I really have to crack into. Regardless, I’m sticking with the March 2016 deadline that I spoke of at the outset, and we’ll see what the snapshot of my wrestling fandom looks like at that point.

I was trying to come up with some type of a structure for these blogs, and I think I’ve assembled a decent one but if anyone reading has any suggestions or questions, I’d love to hear them.

Thanks to NJPW World, a major area of focus for me has been 80’s New Japan. From what I had seen of Tatsumi Fujinami prior to this, I knew he’d be making my list in a very respectable position. But you gain so much more appreciation of a wrestler when you’re able to apply context to his work. That’s what I’ve been able to do with Fujinami. Starting with his bouts as the junior heavyweight ace of New Japan (and the WWF) in the late 70s, I was so impressed by how consistent he was regardless of the opponent. His athleticism, in-ring smarts and intensity shone through whether he was working Dynamite Kid, El Canek or even Ryuma Go. I adored the series with Go. He’s a guy who historically is not considered all that great of a worker but in this series with Fujinami, he brought the goods. So much charisma, and showed a real ability to hang with the superior athlete.

It’s as a heavyweight though that I really started to get my head blown off by Fujinami. Because it’s as a heavyweight that he got to showcase a whole different side of himself. A visceral, hate-fueled side brought out by the man who has caught my attention more than any other thus far in this project – Riki Choshu.

I’ll spare you the in depth history lesson, but long story short; Choshu comes back from Mexico and he’s all “Hey look Mr. Inoki, I won a world title on my excursion and it’s a real legit heavyweight world title too! You proud???” Inoki responds, “Uhh yeah that’s great. Hey have you seen my boy Fujinami? We’re going bowling later and I got us cool matching t-shirts I wanna show him!” Choshu furrowed his brow and a jealous rage burned deep inside him.

So Choshu effectively becomes the first native heel by turning on Inoki and Fujinami and starting up his own crew of awesome dudes who were equally unloved by the boss. Riki and Tatsumi engaged in this AWESOME series of hate-filled matches in front of sold out Sumo Halls month after month. The finishes often weren’t the cleanest but the action from bell to bell is off the charts in every match and the overall story they told was just incredible. I had no idea Choshu was such a dynamic, exciting worker. He definitely doesn’t get the praise he deserves based on what I’ve seen here. I’m looking forward to digging into his All Japan run.

Talk about a guy who got taken for granted. It’s so easy to forget how incredible Rey was when he burst onto the scene in WWE. I watched a bunch of his stuff from the acclaimed PPV matches to random TV bouts to get a feel for just how good Rey was at this point. The answer? Really good.

His chemistry with Kurt Angle was one thing that really stood out, and it left me feeling that even though they wrestled each other a lot, there was a major long-term feud there that was left on the table. When you look at their best matches, SummerSlam 2002 being a good example, it’s clear as day that they had a ton more in the tank as opponents. For someone who feels about as far removed from Lucha Libre as my mother, Angle is one hell of a lucha base and I feel if he worked with Rey more, he would have become even better.

So whilst my 80s New Japan watching had the benefit of context, my attempts at getting to grips with 90s lucha libre have been a lot more patchy. Don’t get me wrong; I’d like to be able to have more focus with it but it’s a lot more difficult in terms of finding things. So random YouTube searches have been the order of the day and I’ve been bouncing around quite a bit.

I’ve seen a lot of stuff I’ve liked, a lot of stuff that was fun and some stuff that just went totally over my head. At this point there are plenty of guys I feel are worthy of consideration on my list but it would involve giving them a ton of benefit of doubt compared to guys who I have a much broader career view on. I’ll keep plugging away.

Stock Up / Stock Down

El Satanico (UP): God I’d love to see more of this dude from the early to mid 80s when he was in his thirties. The only stuff I’ve seen has been a decade or more later, but he was so much fun. Whether it be running the show in a really good trios match as part of his “Los Infernales” team, or in a brutal fight against Pirata Morgan or Sangre Azteca, the old fella brought the goods.

Barry Windham (DOWN): I’ve never really seen it in Barry Windham the way other people do. Don’t get me wrong; he was a hell of a worker but I always hear about how he was one of the best and I just never saw it. But I just kind of accepted it because I heard it so much. So for every match I’ve watched of his recently, I’ve really paid close attention and tried to see it, but alas I still can’t. Sorry Baz!

Hiroshi Hase (UP): I’m very well-versed with his incredible (but all too brief) career in New Japan, but I hadn’t dipped my toe into his All Japan stuff until recently. Had never really heard anything great about it but man, I’ve LOVED everything he’s done that I’ve seen so far. He totally freshens up the Misawa/Kawada/Taue/Kobashi/Akiyama quintet, and brings a different kind of charisma to proceedings.

Atlantis (UP): Definitely want to seek out more of this Observer HOF’er. He’s been a standout in every match I’ve seen him in recently.

Tatsumi Fujinami (UP): (for the reasons talked about)

Riki Choshu (UP): (for the reasons talked about)

Rey Mysterio (UP): (for the reasons talked about)

Kurt Angle (UP): (for the reasons talked about)

Mitsuharu Misawa (DOWN): Wow, mid-late 1997 Misawa totally reminds me of 2007 Misawa and that’s not a good thing. I wonder if this is when Misawa really started to get involved in the business side of things because his in-ring kinda suffered. He just didn’t have the spark or fire that made him so great earlier in the decade. He has a string of Triple Crown defenses which were real disappointing.

Akira Taue (UP): Conversely I really have enjoyed Taue’s work in this 97 period. His little mini-feud with Johnny Ace was a million times better than it had any right to be. It was the first time I’ve seen Taue tasked with being the main guy in a match and he does great.

Akira Hokuto (UP): Not dipped my toe too far into the Joshi swimming pool just yet, but from what I have seen, Hokuto is the first to reach out and try to grab me in. GOD DAMN IT AKIRA, THE WATER’S COLD, GIVE ME A MINUTE!!!!!

Just a small sample of matches that I really enjoyed and/or really influenced some of the above points.

The last topic I want to touch on is a guy who has been seriously adding to his portfolio in 2015. I’ll try to pick a different guy for this every time but the first one his obvious – Kota Ibushi. I would say I’ve probably been the biggest cheerleader of “The Golden Star” since 2007 when he first rocked my world at that year’s Differ Cup, but 2015 was the year where everyone got on board with this guy being elite. He’s had an incredible start to the year. The Nakamura match at the Tokyo Dome, the HARASHIMA match at Saitama Super Arena for DDT, the Naito match in the New Japan Cup and the AJ Styles match a couple weeks ago were all incredible high-end Match Of The Year candidates. With a rematch against HARASHIMA coming up on April 29th and the biggest G1 ever looming this summer, Ibushi will probably continue to rise through the field this year.