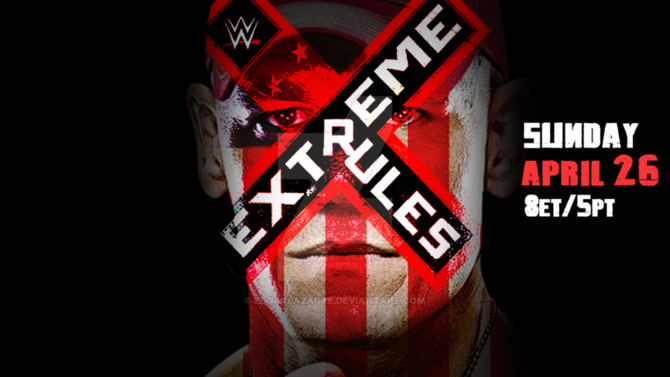 It’s already been confirmed by WWE.com that Daniel Bryan isn’t wrestling tonight. He wasn’t able to get medically cleared and Neville will be taking his place against Wade Barrett.

The match is being added to the kickoff show. No word on whether that means there were will be two matches on the kickoff show or if the tag title match will now be on the main show.

We’ll be back for the Extreme Rules main show.

In the pre-show match, Neville beat Barrett with the Red Arrow.

This match is to be continued. They had a fun and plunderiffic match. Ambrose sent him outside with kendo shots and they went to the back.

Harper jumped into a SUV and Ambrose dove into the front seat via the side window. They drove out of the building.

Dolph worked at a super fast pace to try and get Sheamus off his feet. It was a strong little man/big man match, though, Sheamus isn’t all that much bigger. Ziggler hit him with three flying forearms to try and get him off his feet, but then ate a double axe-handle clothesline.

Sheamus put him in the cloverleaf, but Dolph turned it into a cradle. Sheamus tried to get Ziggler up for a suplex, but Ziggler turned it into an inside cradle for the win. I think they ended it a bit early. I could’ve gone for a few more minutes of it.

Sheamus went outside and wanted the match to be restarted. Dolph teased pulling down his trunks and Sheamus was starting to go crazy.

Finally, he gave Ziggler a nut shot and then the big boot. He rubbed the side of his ass on Ziggler’s forehead after the match.

New Day won the straps in a bit of an upset, but in a very good match.

Big E must’ve taken five or six bumps to the outside, including spearing Kidd by diving through the ropes. There was a lot of good stuff between Kidd and Kofi and Cesaro and Kofi. Kofi set up Kidd for the Trouble In Paradise kick, but Kidd turned it into a Sharpshooter. Big E broke it up and gave Kidd a belly to belly.

Cesaro had Kingston in the Giant Swing and Kidd drop kicked him. Big E broke up the pin again. In the end of the match, Kingston rolled up Cesaro and grabbed the tights for the win.

New Day was being interviewed and the the SUV came back and Harper rolled out of the backseat and out of the car.

Ambrose won after giving the Dirty Deeds on top of a bunch of chairs. The “All Over” Chicago Streetfight is now done.

What a goofy match this is. First off, the chain was way too long and you didn’t have to drag the opponent anywhere. Secondly, they kept tripping over the chain and it was getting in the way.

Roman Reigns said he’ll get knocked down, but you can’t keep him down and that he’ll be the last man standing.

Naomi worked at a faster pace than any of the current WWE divas and it helped the match. She had the offensive for most of the match until Brie kicked her in the “head” when she was draped over the bottom rope. She really kicked her closer to her ribs. Then Nikki hit the rack attack for the pinfall.

Reigns better be taking Show out to dinner and all-you-can-eat after the beating Show took in order to keep Reigns strong.

They teased early that Show wasn’t going to allow Reigns to use a table so of course, the match was all about using tables.

The best usage was Show choke-slamming Reigns outside the ring and onto two tables. But Reigns got up before the 10-count. Show tried to spear Reigns into the corner, but Reigns moved out of the way and Show dove threw a table that was perched.

Near the end, they went outside. Reigns put Show through the announcer’s table, but Show got up at 8. Then, Reigns dumped the other table on top of him and stood on top as Show was counted out.

Bo Dallas came out only to get beat up by Ryback.

Looks like we’re seeing Cena and Rusev again next month in an I Quit Match.

The match was solid, but the finish was overbooked.

Orton hit a great superplex with Rollins’ feet draped on top of the cage. J&J tried to get involved but as they were climbing the cage, Orton tossed Rollins into the cage and bumped them both off.

Orton and Rollins were both trying to get to the cage door to leave, but Kane slammed it on both of their heads. He then got into the ring and chokeslammed them both. He draped Rollins over Orton and Orton kicked out. He came back toward Orton who gave him the RKO. Then Rollins RKO’d Orton, which was supposed to be against the rules.

Rollins then scurried out the front door.