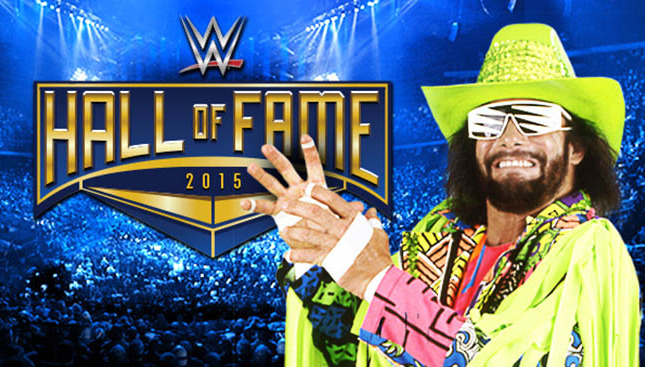 We’re live, though not on the red carpet, for tonight’s Hall Of Fame ceremony. We’ll update this post with live thoughts.

The show is about to start and Michael Cole comes on stage to tell the fans that they can’t yell or chant at the presenters or inducties. Good look controlling that one.

Stage looks very similar to how it always looks. 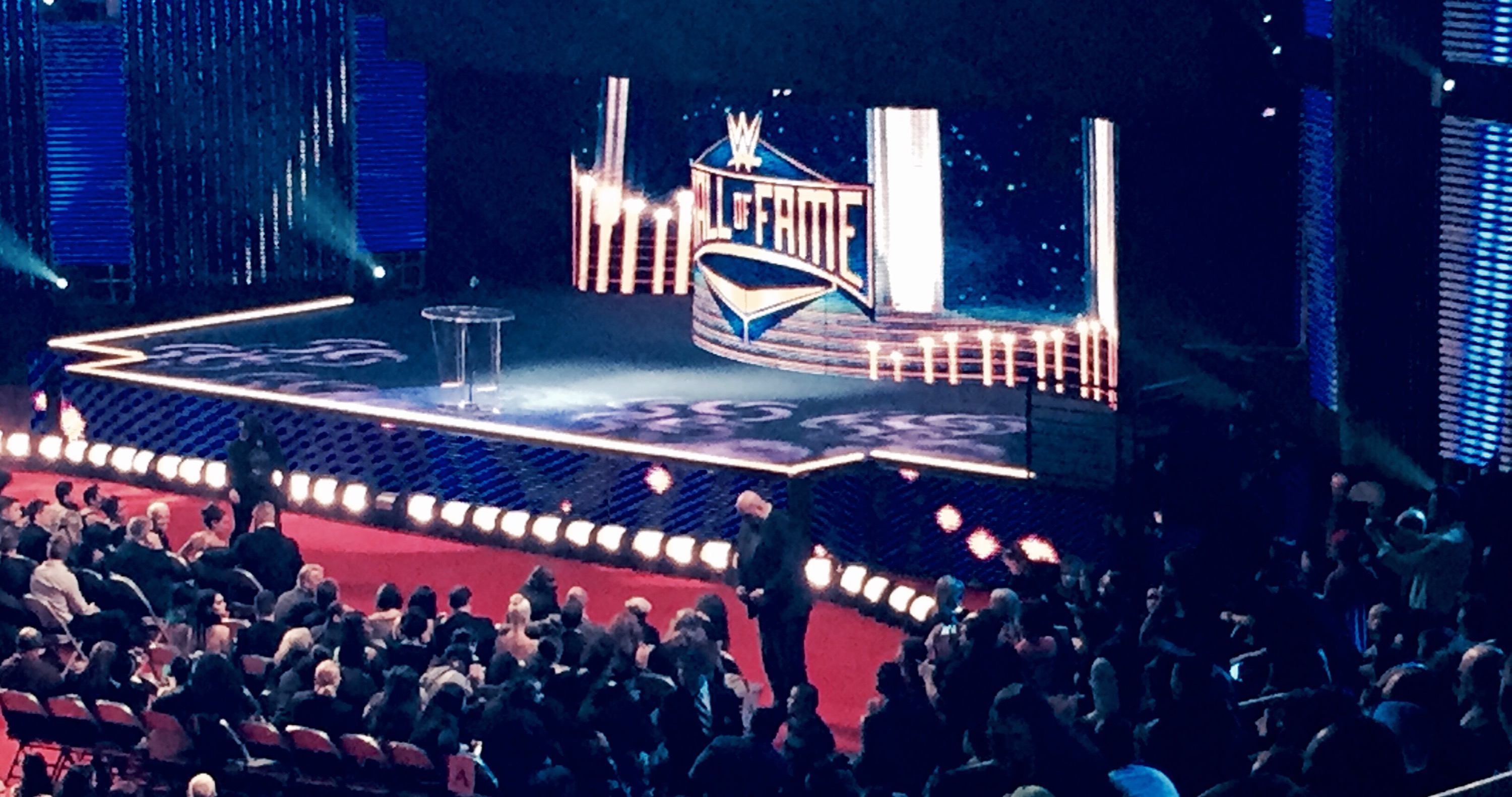 Looks like Rikishi will be the first one inducted.

Jey and Jimmy Uso are out to induct their father. Jimmy said that all their family is in the Bay Area.

They mentioned all of their dad’s characters and said that one put them through college and bought Christmas presents. A photo of Rikishi’s ass is behind them on the big screen. 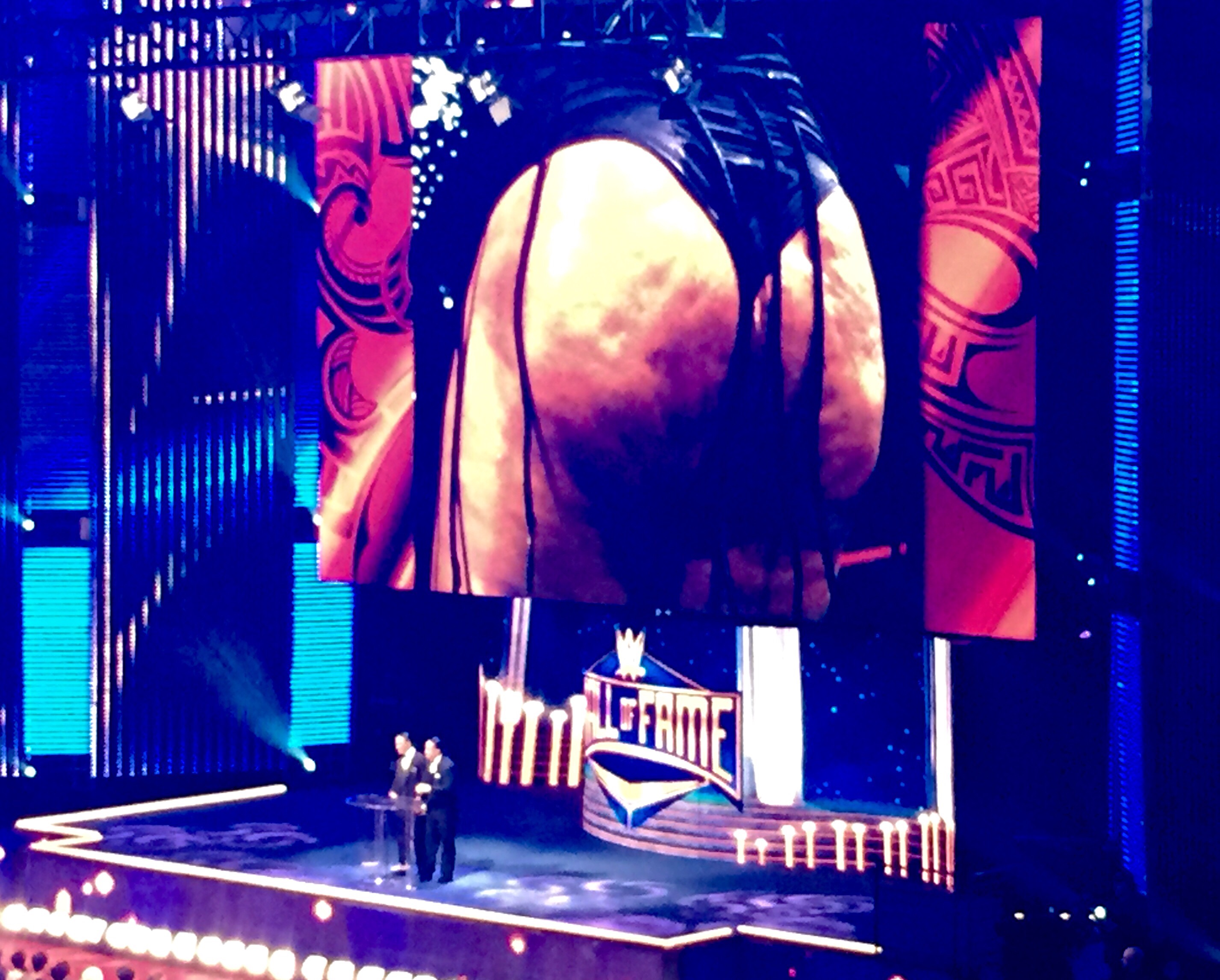 Rikishi talked about his family history and mentions all of the family members who wrestled. Umaga’s name got the biggest pop of them all. Reigns’ name was booed heavily.

He went on to shout out his father, mother (who is no longer with us), his wife who he called his super woman, and the WWE fans.

He put over his wrestling school, and Rusev, who came through the school.

He said that he remembers everything about his career, but what he’ll remember most of all is this moment.

And of course he and the twins danced. It was a great way to open the show.

Bruno said that he first met Larry when he was 15 or 16. Larry found out where he lived and would ask Bruno about how to get into wrestling. Bruno told him to finish high school and college. Larry did that and made sure Bruno kept his word.

Larry asked to work the angle with Bruno and it worked when he turned on Bruno. He then talked about how well Larry drew after that. 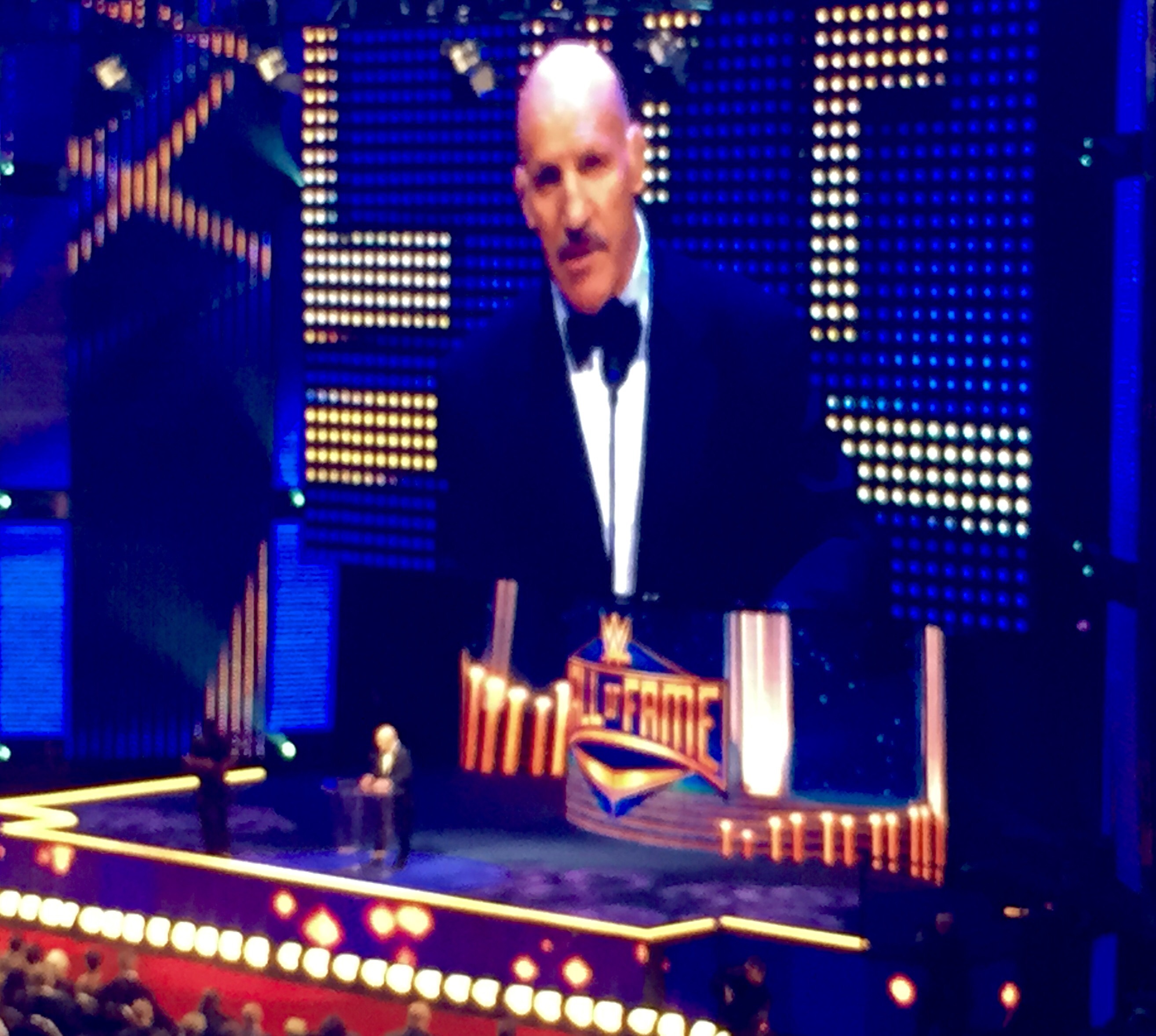 He said that his mom was the one who gave him Bruno’s address. He talks about meeting Bruno as destiny. He’s not sure why Bruno took him under his wing. Larry seems a bit overwhelmed by the moment.

He then thanked Bruno from the bottom of his heart. He also thanked Vince McMahon Sr.

Natalya is inducting Madusa. She’s putting over Madusa throwing the belt in the garbage as a big part of the Monday Night War.

She told a story about Madusa being upset at Arn Anderson and chasing him with her heel.

She said she never expected this. She talked about being promoted by Ed Sharkey. She brought up Wahoo McDaniel who wanted her to work with Sherri Martel. Greg Valentine and Pat Patterson helped her get into WWE.

She thanked Verne Gagne, Curt Hennig, DDP, her Japanese wrestling family, her family, and put over the WWE Network.

She put over a lot of people she worked with including Evan Karagious, Paul Heyman, Steve Austin, Bobby Eaton, Randy Savage, and many others.

She was on fire tonight. This was easily the best speech thus far.

She talked about Bischoff wanting her to throw the title in the trash. She said she’s at peace with it and everyone else should be too.

Natalya brought out a garbage can and she pulled some things out of it including barbecue sauce, Bishoff’s book, and the old women’s title belt. She said it’s now home where it belongs.

Warrior’s wife Dana is out to talk about her husband and give Connor The Crusher the first ever Warrior Award.

She echoed her husband by saying the most important job she has is being her daughters’ mother.

She talked about trying to eradicate cancer in the name of WWE and Warrior.

He tells a story of Connor punching Triple H in the face that the crowd loved. He said that Conor is the right person to receive this award because even though he only lived a short time, they have raised over $200,000 in his name so other kids don’t have to suffer like he did.

Bryan handed the award to Connor’s dad. He said that without Connor’s spirit, he couldn’t be up there. He talked a little bit about the Connor’s Cure foundation.

Johnny Ace is inducting them into the Hall of Fame. He talks about the Kiwis and the Sheephearders.

Luke and Butch are quite in character. They talked about working with Killer Kowolski and Andre The Giant in the late 60s in Australia. They also brought up the high chief Peter Maiva.

Butch is cutting a terrific promo. He talked about the Samoans coming after him. The best story was that at the infamous Royal Rumble where Luke got tossed out quickly. Butch was hot because he had to be in the match for 25 minutes and they got the same payoff.

They called out Roddy Piper, Ted DiBiase, Bret Hart, and Hacksaw Duggan. The first three did the Bushwhackers walks to give Butch a low five.

Flair is inducting Fujinami. He said that he thought he worked out hard, but said the dojo was all about breaking kids to make sure only the ones who wanted it got in. 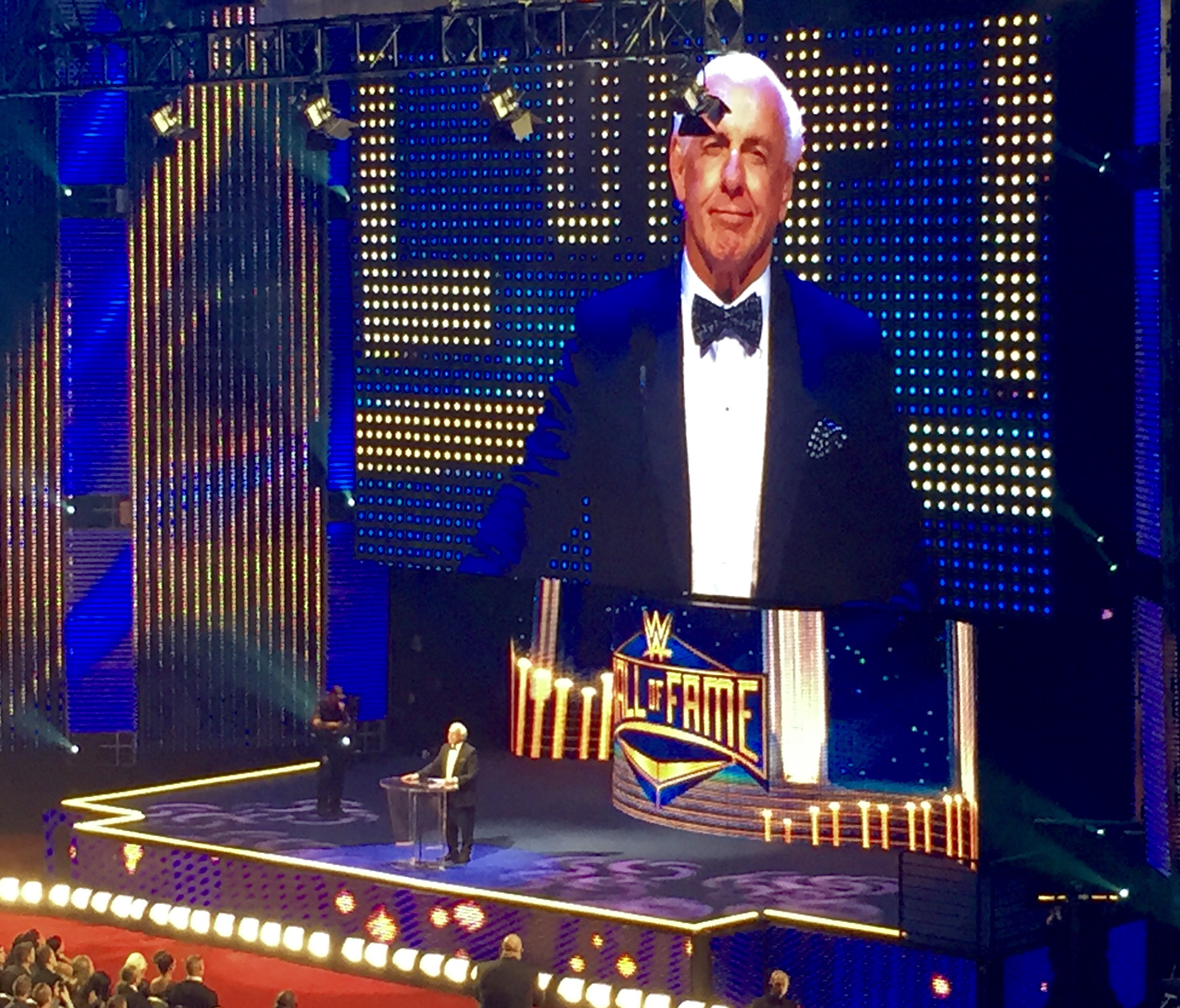 Flair said that in his opinion, Fujinami is the greatest Japanese wrestler of all-time.

Fujinami said it was his mission to fight. He wanted to thank his wife and family. He was short and to the point.

It looks like Nash will wrap it up with Arnold as the buffer.

Hulk Hogan comes out and does his best Savage impersonation. 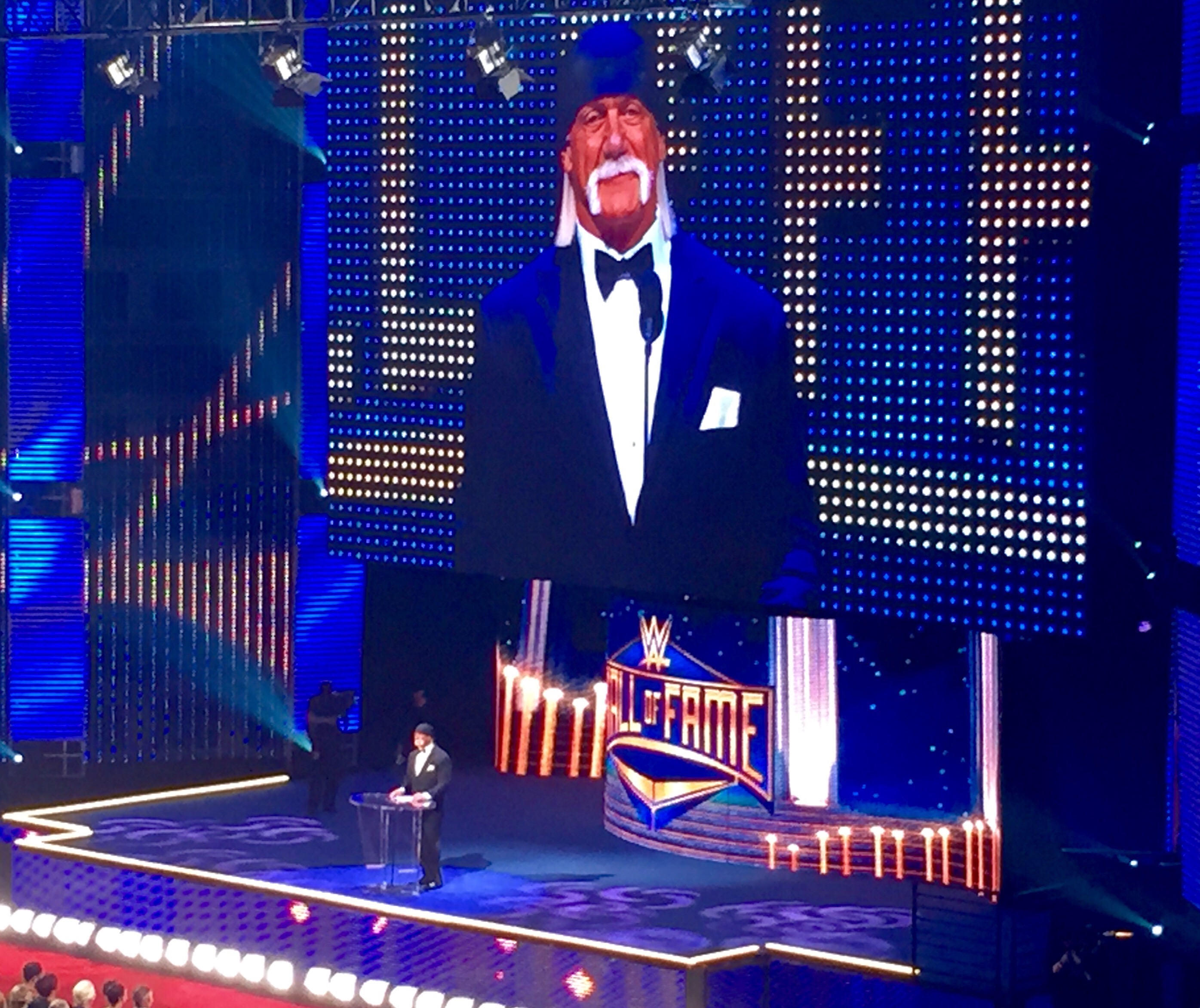 He said that he admits that Macho Man stole the show at WrestleMania III. He brought up the jealous eyes promo and how he raised the bar and made Hogan raise his game as well.

Hogan introduced Lanny Poffo. Of course he started out with a poem.

He said that Randy didn’t have any kids of his own, but he did work with the special Olympic kids and saw them as his children.

He said what made Randy perform well for the kids was the WWE bringing free merchandise for the kids so that he could feel like Santa Claus.

From Terminator to governator, to Hall Of Famer…

Triple H says that if Arnold’s hero wasn’t Reg Park and instead was Bruno, he could’ve been the biggest WWE superstar of all-time.

Arnold hits all his catchphrases to start. He talked about all his dreams. Whenever he talks about being the governor, the crowd treats him like he’s Roman Reigns.

He talks about seeing Otto Wantz. Said he did idolize wrestlers as well. He said when he won his 3rd Mr. Universe in New York, Bruno Sammartino was the head judge and they’ve been friends ever since.

He ends it by saying thank you America a few times and said, “I’ll be back.”

HBK is inducting Nash. HBK took the script he had a ripped it up. He talks about bringing Nash into WWE. HBK needed a body guard and Nash got out of his contract in WCW by saying he was going back to bouncing.

Shawn said that he also needed a bodyguard in real life because no one liked him. He was jealous that Vince McMahon fell for Nash. He wanted to put the strap on him.

When Nash won, he thanked Shawn for allowing him to hitch his trailer onto Shawn’s wagon. Shawn said that everyone now has a guarantee thanks to Hall and Nash. Shawn connected the dots between Nash leaving and him receiving DX royalty checks for the rest of his life. 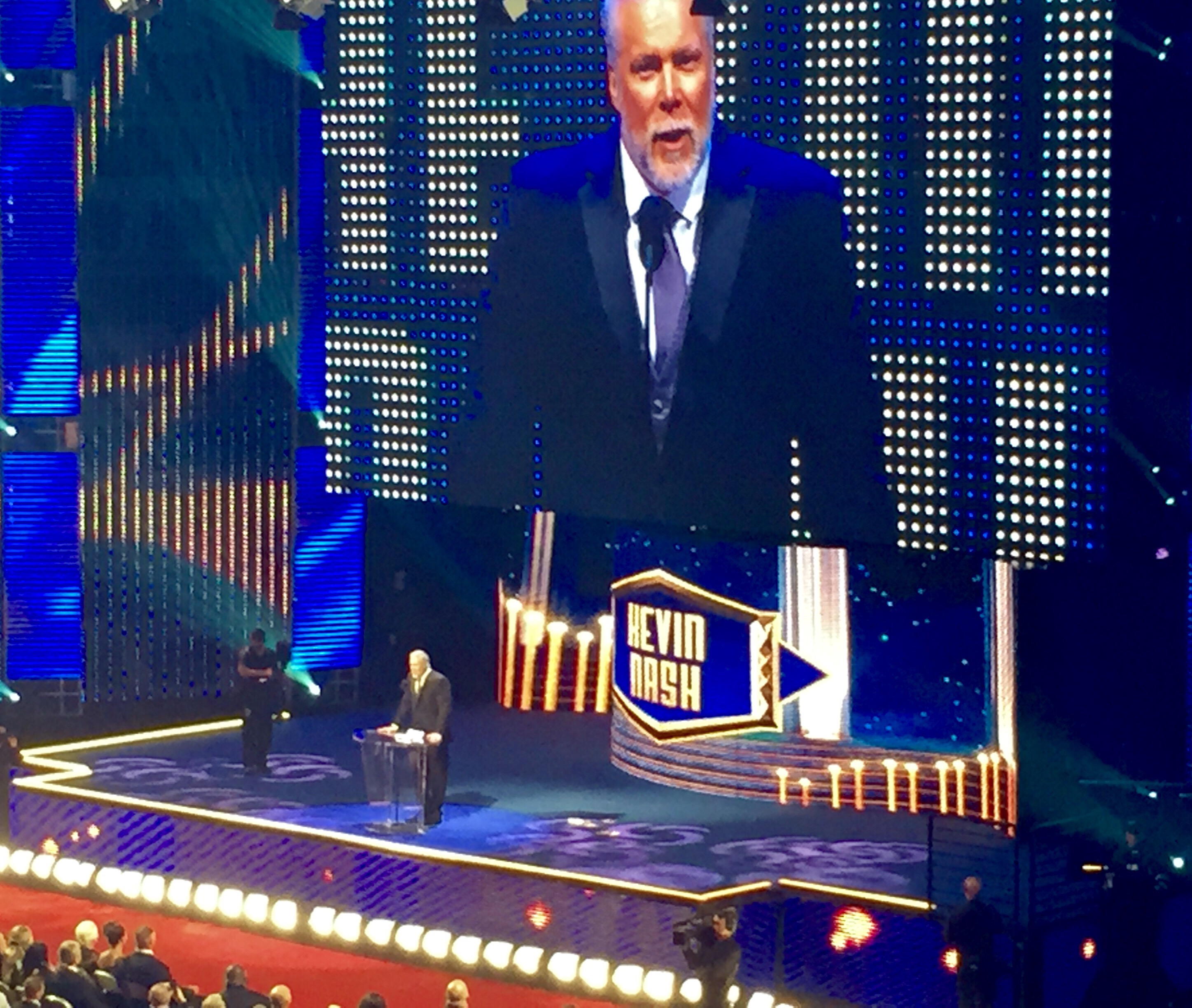 Nash said that he never said he was a great dancer but he could follow. He thanked all the great workers he wrestled.

He talked about going from a Master Blaster and a Road Warriors wannabe to Dusty creating Oz for him. He talked about wanting to quit but DDP told him to stick with it.

He said in is WWE debut, he did more in that one day than he did in 3 years with WCW. He quickly talked about being surprised when he was told by Vince that he was going to be the champ.

He said his first mentor was Rick Rude. Rude told him to keep his wife away from the business if he wanted to keep her. The Kliq joined him on stage and it was over.