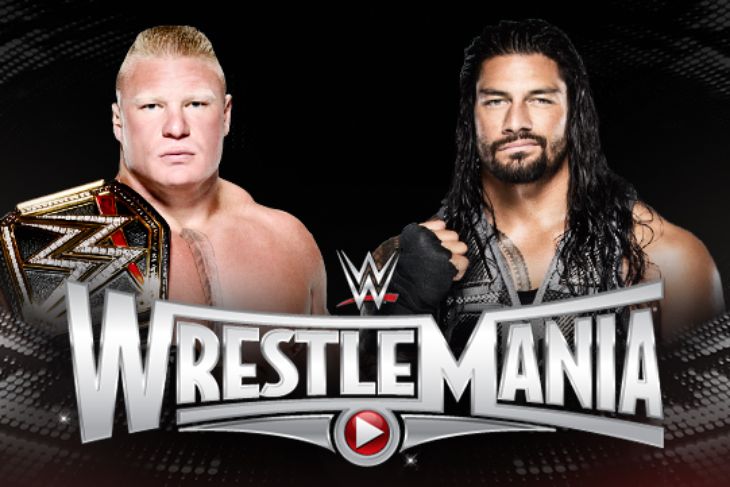 It’s the grandaddy of them all. Welcome to our WrestleMania 31 live coverage.

A few notes before the big show:

– It does seem that Samoa Joe is going to be with WWE/NXT at some point soon. He answered that question very politically, but twice this weekend, said that he wants to face Brock Lesnar as a dream match.

– Jim Ross was ringside at NXT. Is he going to be on WWE’s radar soon?

– All signs are pointing to The Rock being in the Bay Area this weekend. That doesn’t mean he’ll be at WrestleMania tonight, but I’m just throwing that out there.

We missed this match because of the clusterfuck that is Levi’s Stadium, but I heard it was a fun match. Cesaro stole the pin on Big E to win the match.

It was down to Show, Miz, and Mizdow. Miz wanted Mizdow to go after Show, but he said no. Miz got mad and Mizdow tossed him to a huge pop.

It’s down to Show and Mizdow. 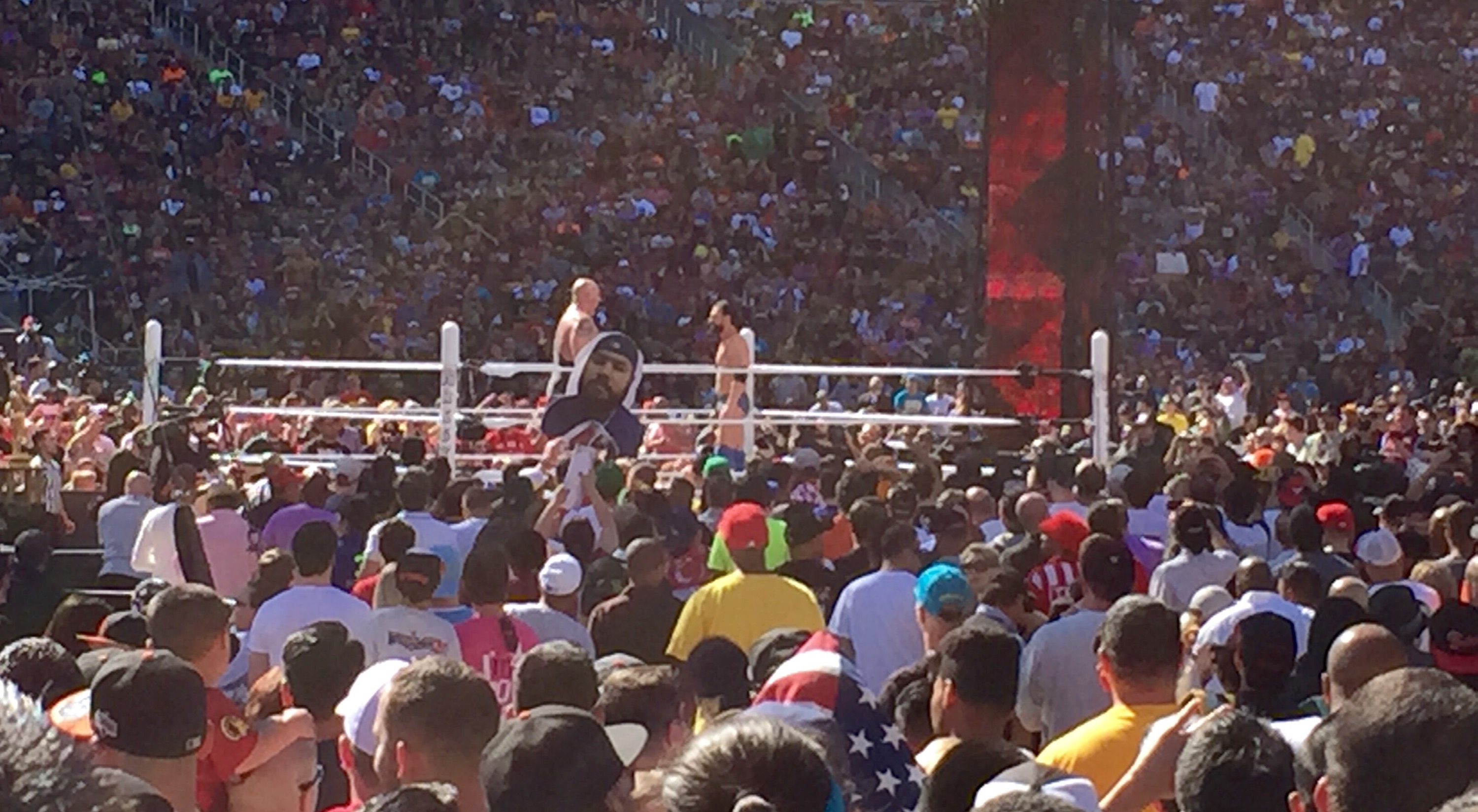 Show thought he tossed him out. Mizdow back in and he almost had Show out. The crowd is changing yes for punches that land. Mizdow teases doing what Benoit did to Show in the 04 Rumble, but Show tossed him out.

Tons of babyfaces must be going over tonight.

For the sake of the health of everyone involved, I hope they don’t go too crazy here.

Ambrose did a dive early. Luke Harper had some spots where he used the ladder around his neck as a weapon. He also tossed Ambrose to the outside onto ladders. That had to hurt.

Barrett had some bad news for Dolph who was on top of the ladder in the name of a bull hammer. Truth too.

Bryan hit the running knee on Barrett. Bryan and Ziggler did wacky headbutt spots at the top and Ziggler finally went down and Bryan won the strap. 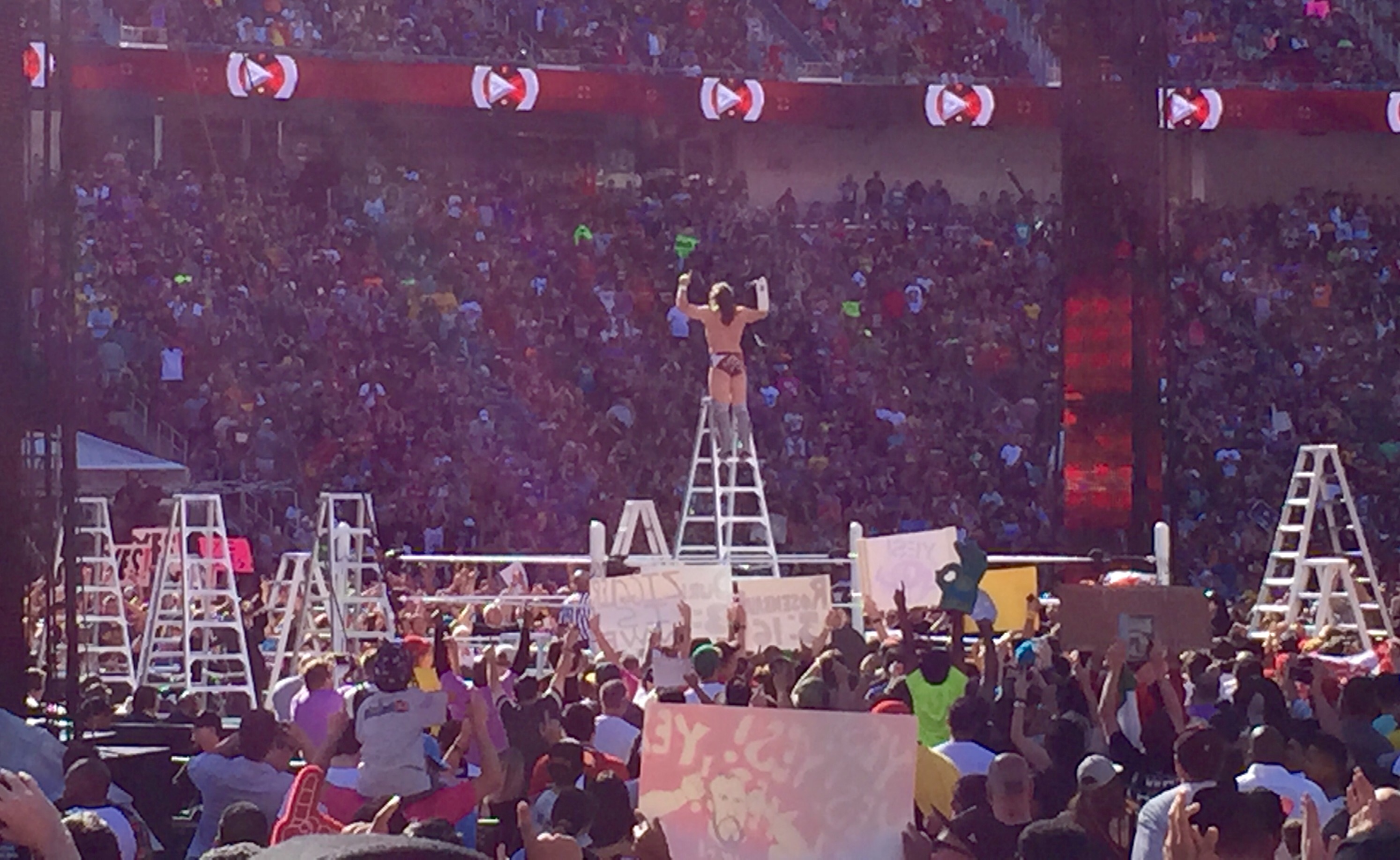 Looks like we’re getting Seth Rollins vs Randy Orton next.

Is this going to be the best actual wrestling match of the night?

Slow and methodical after the spot fest earlier on, but it told a good story. Orton is so damn good at getting the crowd ready for stuff. They had a really creative RKO for a two count.

Orton set up for the punt, but the new stooges blocked him. They both are RKOs. Seth hit the curb stomp for a two. In the move of the night unless it gets topped, Rollins set up another curb stomp, Orton got it right as Rollins was on his back, launched him in the air and delivered the sweetest RKO of all time.

The crowd chanted, “This is awesome” based on the entrance alone. And then we get a lockup.

This was NWO vs DX or WWE vs WCW. And since it was that, you can guess who won.

Sting was able to do all his trademark stuff. He was a little slow and maybe a bit winded, but this crowd didn’t care. They loved it.

DX, sans Shawn came out to interfere. Then Hulk Hogan, Scott Hall, and Kevin Nash came out as NWO to counter them.

Sting had Triple H in the scorpion death lock and Shawn Michaels showed up and super kicked him. Triple H got the two.

Triple H got the sledge. Scott Hall gave the bat to Sting and he busted the sledge in half. He hit the Stinger splash and then tried it again, but Triple H hit him with the hammer edge of the sledge for the pin.

Maria Menunos interviewed Daniel Bryan who  was interrupted by Pat Patterson, Roddy Piper, Ricky Steamboat, and Bret Hart who put him over. They did Yes! chants. Ron Simmons said damn.

Paige and AJ Lee Vs The Bellas

Let’s see if they get any time for the match. 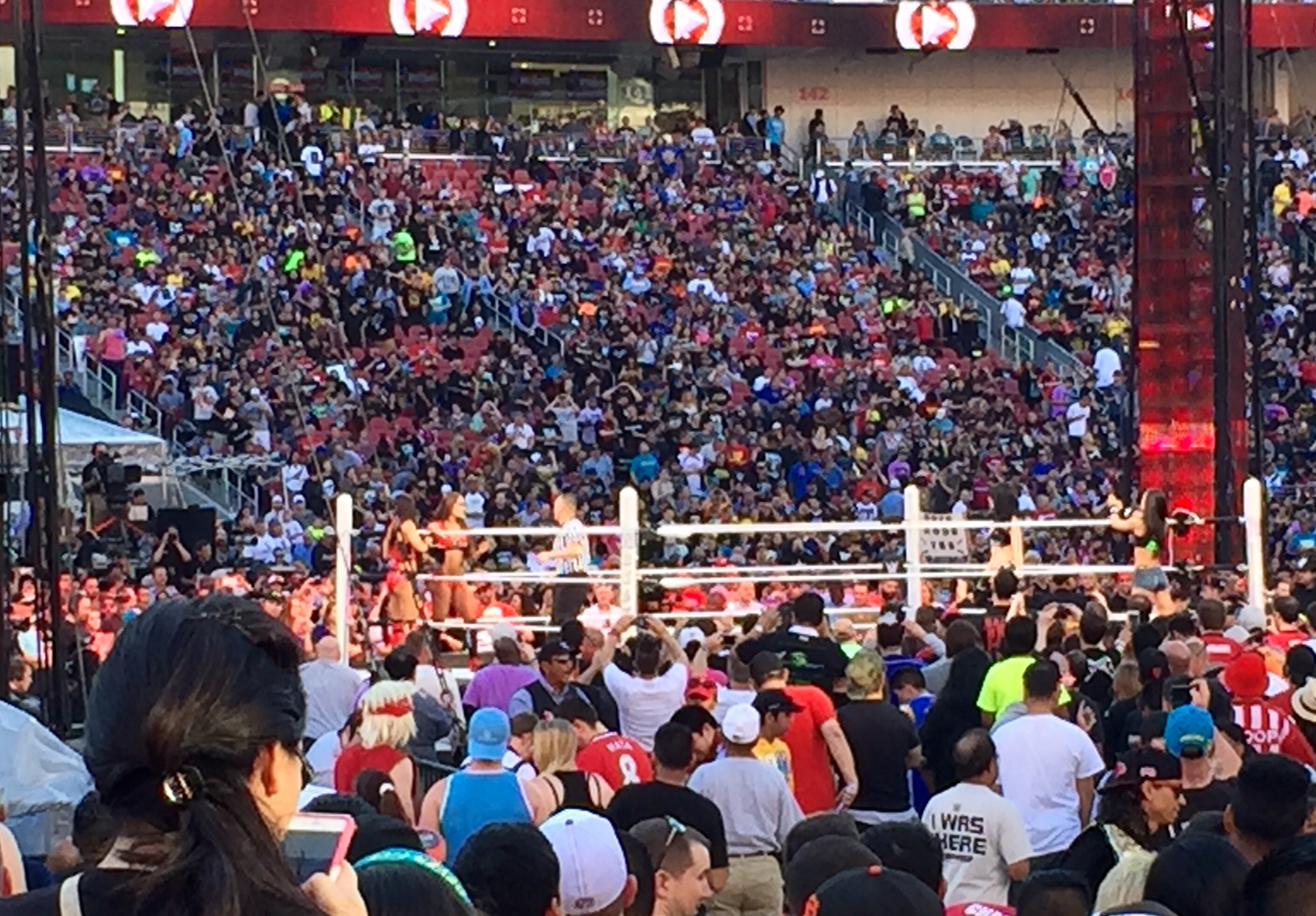 They did get time and it turned into a fun little match live, but there was no heat for it. AJ made Nikki tap for the Black Widow.

They both had great entrances. Lana is back and she came out with marching soldiers. Rusev came out on a tank. Cena came out with a gorgeous backdrop. 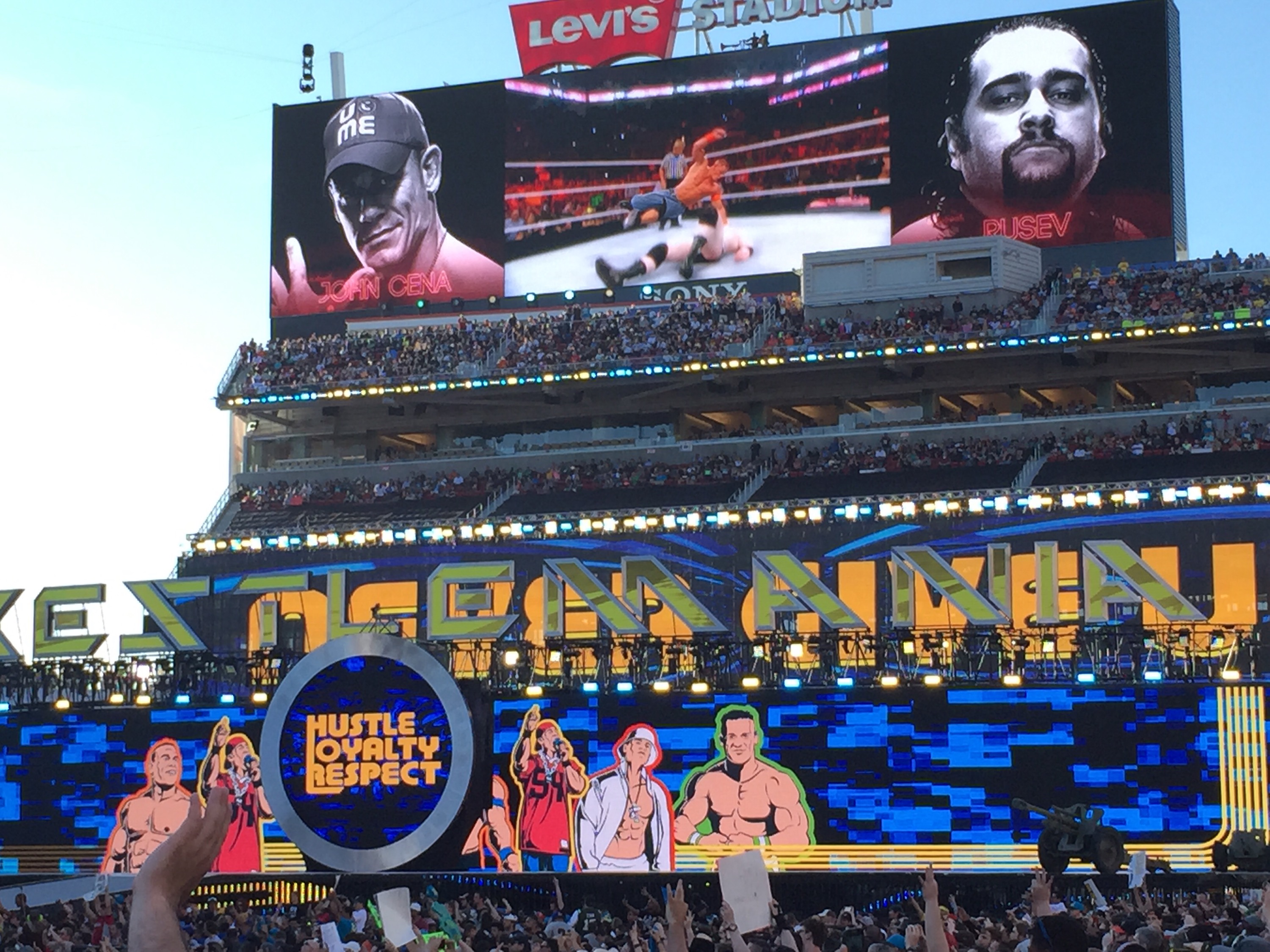 Rusev tried for the Accolade but Cena got out. He got it again and Cena powered out of it and got to his feet after struggling with it. He backed Rusev into the corner and then put on the STFU. Rusev got out of it, rushed Cena but Cena moved and Lana, who was on the apron, bumped to the floor. One FU and it was over. Cena is your new US champ.

Lana was limping and had to get helped to the back. Rusev didn’t care.

Triple H and Stephanie were out to announce 76,000 fans and change. Triple H said that after beating Sting, he has beaten everyone who has not been on his side, including thousands of fans and millions of people watching.

Enter; Dwayne. Rock came out to a damn thunderous applause.

Stephanie berated Rock, slapped him and dared him to hit her. Rock said he couldn’t hit a woman, but he brought his friend Ronda out who could.

Stephanie told Ronda it was her ring. Ronda said any ring she steps in is hers. Rock teed off on Triple H, he took a judo throw from Ronda and Ronda teased an arm bar but basically rag dolled Steph gently.

It was a tremendous moment.

Bray Wyatt Vs The Undertaker

It’s not going to be dark here so Bray had to do with mildly dusk.

The Undertaker entrance never gets old. He also looks to be moving around a lot better than last year. He did old school and the leg drop on the apron.

Bray took most of the rest of the match. Taker caught him in the gogoplata, but Bray broke out. Bray teased the crab walk but didn’t do it. He went for the Sister Abigail, but the Undertaker reversed it into a choke slam. Taker went for the tombstone, but Bray kicked out.

He went for it again, but Bray turned it into a Sister Abigail for a two count. Bray crab walked and Taker sat up. They threw haymakers at each other and Bray put him down again. He went for Sister Abby again and kissed Taker. Taker reversed it into a tombstone for the win.

Roman is going to get booed out of the building. 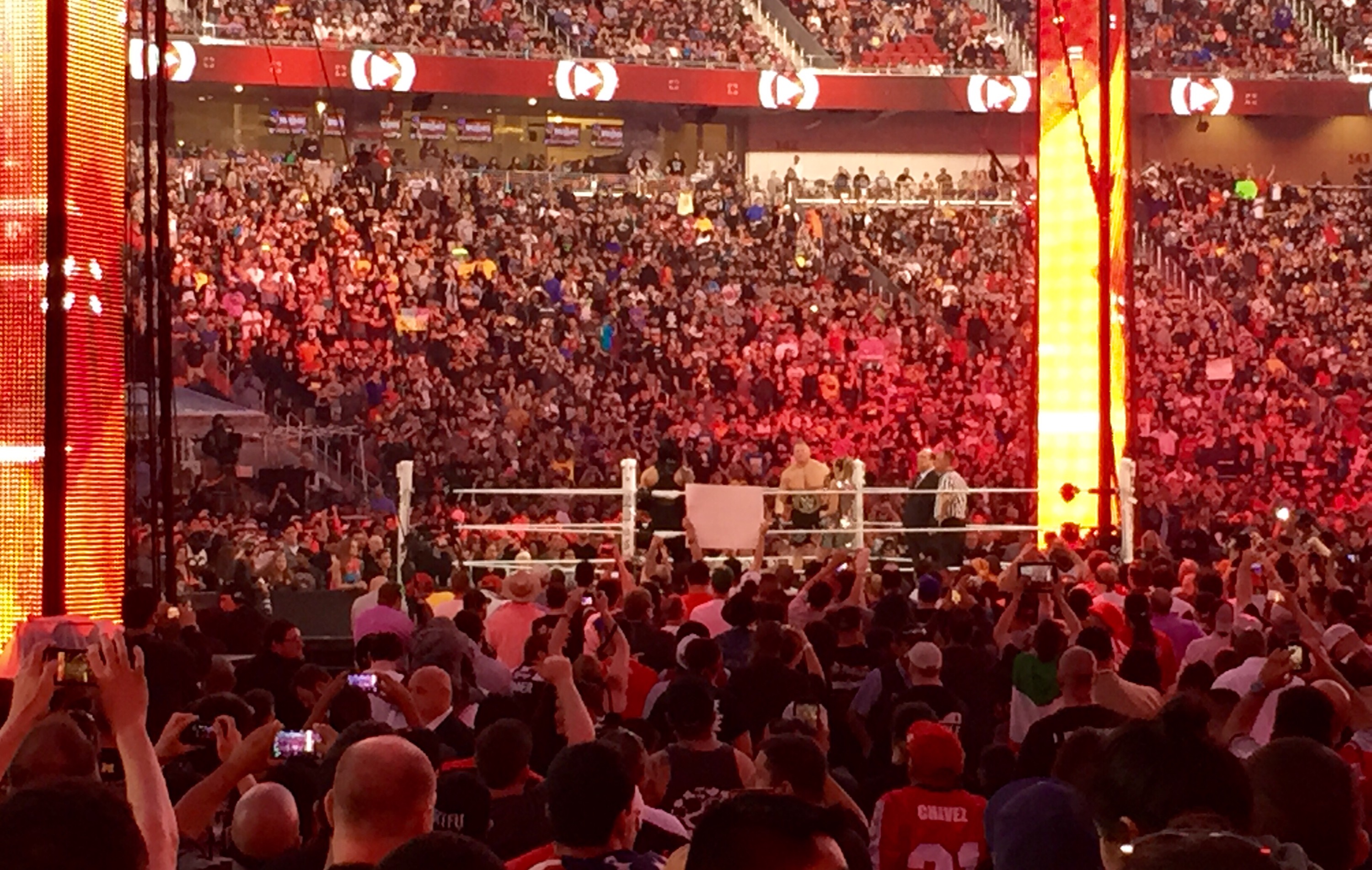 Business is about to pick up.

The match told the story that Reigns was a gamer and was tough. Lesnar beat him more than he beat Cena and Taker and Reigns wouldn’t quit. Reigns made his comeback with multiple Superman punches and a spear but Lesnar kicked out. He went for another spear but Lesnar caught him for the F5.

This was an absolutely amazing show live.